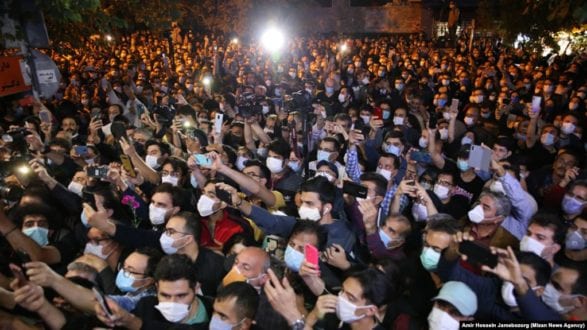 Al-Arabia – A gathering of fans of the late Iranian composer and singer Mohammad Reza Shajarian in the capital Tehran outside the hospital where he died turned into an anti-government protest Thursday evening, with demonstrators chanting “death to the dictator,” according to videos shared on social media.

Shajarian, 80, died of a heart attack in Tehran’s Jam hospital on Thursday, his son Homayoun announced on Instagram.

The legendary musician had become a symbol for the Iranian opposition after he declared his support for the protests over the disputed reelection of former president Mahmoud Ahmadinejad in 2009.

“Death to the dictator,” people outside Tehran’s Jam hospital were seen chanting in one video shared on Twitter. This chant is commonly used in anti-government protests in Iran and is directed at Supreme Leader Ayatollah Ali Khamenei.

Protesters also chanted against Iran’s state broadcaster, which had refrained from playing Shajarian’s songs since 2009.

“Our radio and television is our disgrace,” protesters were seen chanting in another video shared on Twitter.

Security forces beat protesters with batons and arrested a number of them, according to social media reports.