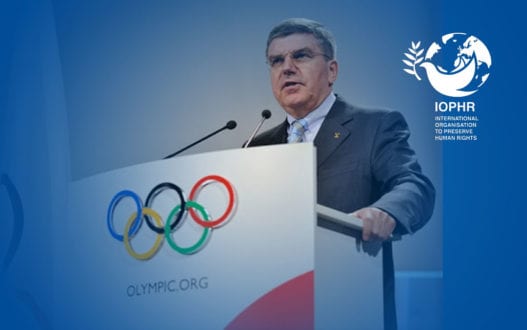 The letter stated that “the recent execution of the Mr Navid Afkari is simply one more cruel step in a series of offenses against the Iranian athletes that the Iranian regime has committed over last the forty years.” Moreover the letter also highlighted the “corruption and money laundering, within Iranian Sporting world through which the Iranian regime has virtually eliminated all international control mechanisms necessary for healthy competition.” The statement also discussed how female Iranian athletes are consistently pressured, and threatened to cover their heads and bodies, in international sports competitions, against their will.

The letter ended by saying “Given the recent global outcry at the execution of Mr Afkari, many of which have been expressed by numerous international sporting bodies, it is clear that IOPHR is not alone in asking for suspension of the Iranian regime from sporting competitions, and has in fact the support of many international sporting bodies, and athletes. As sadly it seems that only by such measures, the Iranian regime can be forced to modify its behaviour towards its own athletes and citizens.”

Full text of letter is below: