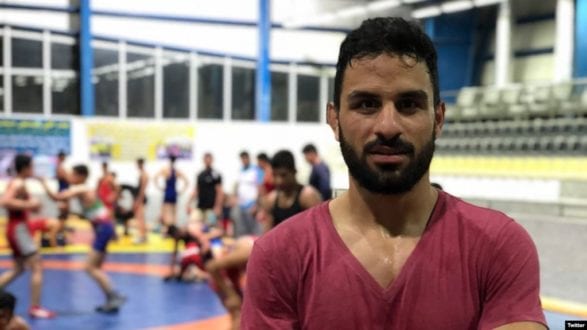 Iran-HRM – The abrupt execution of wrestling champion Navid Afkari on September 12 has cast doubts about the nature of his death.

The regime Ministry of Intelligence and Security (MOIS) threatened Navid’s father, mother and two brothers in Sangar Shir village of Shiraz before delivering the body and only allowing them to bury him at night with very limited attendance.

The regime banned mobile phones at the burial to prevent videos from being posted on social networks.

The regime’s agents had also prepared the grave in advance so that the victim would be buried in short time and prevent public gathering. Dozens of MOIS agents and suppressive forces were present at the funeral as fear for people’s protests.

A secretly captured video of his funeral was released online the same day.

Despite heavy restrictions and presence of security and intelligence agents, groups of youths from Shiraz visited the cemetery of Sangar village on the morrow of his Navid’s funeral and placed flowers and candles on his grave.

There are reports that Navid was not executed and was tortured to death.

Though these reports cannot be confirmed, eyewitnesses who saw Navid’s face said that his nose was broken and that there were no rope burns around his neck.

The wrestling champion Navid Afkari was arrested for participating in protests in the southern city of Shiraz in 2018 and was convicted of killing a security guard with the government’s water and sewage department.

He was sentenced to death after being brutally tortured and forced to confess to crimes he had not committed.

He sent many messages from prison saying he was tortured into confessing to crimes he did not commit.

In a letter sent from Adelabad Prison on September 13, 2019, he described the horrific physical and psychological tortures he went through.

“For around 50 days I had to endure the most horrendous physical and psychological tortures. They would beat me with sticks and batons, hitting my arms, legs, abdomen and back. They would place a plastic bag on my head and torture me until I suffocated to the very brink of death. They also poured alcohol into my nose,” the letter reads.

Based on the standards of the regime’s Judiciary, death row prisoners are allowed one last visit before their execution. Navid Afkari was denied that right and was hanged without his family’s knowledge.

A two-minute audio recording of Navid Afkari’s last phone call, circulated on social media on Monday, September 14, shows that he had no information about his imminent execution.