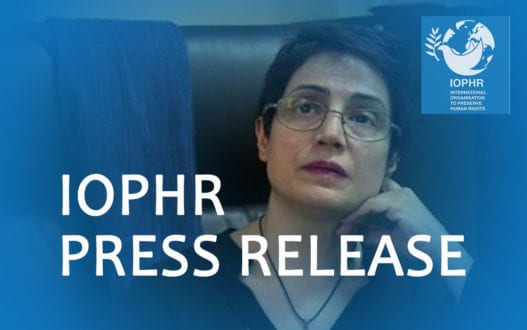 IOPHR condemns the summoning, and detention of Ms. Mehraveh Khandan the daughter of Ms. Nasrin Sotoudeh.

Shabtabnews – In a statement The International Organisation to Preserve Human Rights (IOPHR) condemned the recent summoning, and detention of Ms. Mehraveh Khandan the daughter of Ms. Nasrin Sotoudeh.

The statement also drew attention to the Iranian regimes systematic methods of putting extra pressure on prisoners of conscience like “the blocking of Ms. Narges Mohammadi’s telephone contact with her children from prison, and the unjustified arrest, and the sentencing of Mr. Ali Nourizad, the son of Mr. Mohammad Nourizad – a political prisoner, to four years in prison.”

This statement also called on all “Iranian citizens to unite, and not to abandon the rights of their  children, by holding peaceful rallies in front of prisons across the country, calling for the immediate release of all political prisoners, especially those defending fundamental human rights, who are suffering imprisonment, and torture as result.” It also asked “international bodies such as the European Parliament, and the United Nations, both pass Human rights sanctions against human rights violators in Iran.”

For full details of the statement please see below link: