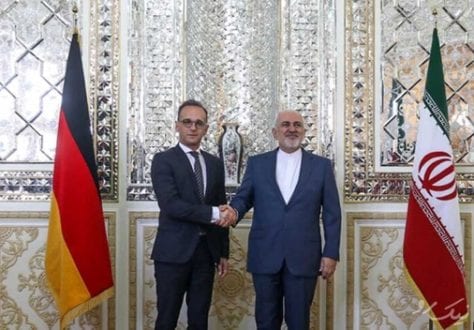 As the theocracy of Iran is heavily criticized internationally for its violations of human rights and their constant ambition to occupy and govern its neighboring countries, it is perplexing to observe how certain countries refrain from speaking out against the actions of this nation and instead put a lot of effort in maintaining good diplomatic relations. In the case of Germany this fact is far more astonishing considering that Iran is one of the few countries in the world that openly denies the Holocaust.

So, what are the reasons for this bilateral shared respect and relationship between Germany and Iran?

Iran’s first official diplomatic office opened in Bonn in 1952, post WW2, but relations between the two countries have been ongoing since the beginning of the 19th century. Growing unpopularity against the imperial forces in Iran (Russia, Great Britain and US) made Iranians look for other potential allies.

Wilhelm Wassmuss (pic left) was one of many characters that had an interesting role to play during these times, he was also referred to as a German “Lawrence of Arabia”. He arrived at the Persian Gulf in 1914 as a German consul. During this period of time both Britain and Russia were busy integrating Iran into their own empires. Wassmuss’ presence in the midst of the ongoing Iranian uprising against imperial powers had become something of a legend to Iranians who regarded him, as well as Germany, as allies.
This regard of Germany has deep roots in their relationship even today; Germans were never thought of as a colonial power but rather a “true friend”. The impact of Germany on Iran was initiated with cultural and later economic methods. In 1916, Friedrich Rosen (Emperor Wilhelm II’s foremost diplomat at the time), published the first edition of an anti-British military magazine titled “Kaveh” together with some Iranians. Kaveh is a well-known heroic character originated from Iranian mythology, a blacksmith standing against the oppression of tyrants. This political and literary journal was financed, organized and distributed both in Europe and Iran by the German Foreign ministry from 1916-1922. The “Kaveh” journal fueled a patriotic inspiration among the Iranians and the people behind the journal eventually opened up for Reza Khan becoming minister of defense, prime minister and ultimately the new King of Iran. The journal’s editor-in-chief; Hassan Taqizadeh became his most important advisor.

In 1933, a political branch of the Nazi party started in Iran and Joseph Goebbels funded propaganda and magazines in the country, portraying Iranian fascism and their similarities in the struggle. Political prominent figures from the Nazi party engaged in state visits to Iran during this period. Reza Shah was officially known to be an admirer of Hitler. Nazi Germany downplayed the racial inferiority card in reference to the people of Middle East in public and this played well into Reza Shah’s sympathy towards Nazi Germany and Hitler. After all, Germany did not have the habit of occupying territories such as Great Britain and the Soviet Union. Iran’s department of Nazi Germany propaganda services also had a radio channel called Radio Zeesen, in their broadcasts it is claimed that Hitler was portrayed as a Messiah, the twelfth Imam, who had returned to fight the Jews and the communists. Many parallels were made between Hitler and religious figures from the Quran. Many argue that the effort of spreading anti-semitism in this manner had little effect on the public, but it is important to remember that these propaganda methods are still in use today and resonate well with people in certain circles.

Germany had a great deal of influence on Iran, both on a political level but also through the modernizing projects of Iranian infrastructure. In fact, one of Germany’s greater contribution in infrastructure was the building of the Trans-Iranian Railway Project, connecting Tehran with the Persian Gulf in the south and the Caspian Sea in the north. This enormous project took place between 1927-1938. Almost the entire German industry was represented in this project; from German banks to Julius Berger, Philipp Holzmann, Siemens, Lufthansa, including many more financial institutes. Reza Khan and his attempt to modernize Iran by looking to the Germans and to Ataturk in Turkey, ended during the Second World War. But Wassmuss’ intentions of creating and entertaining good relations with Iran was now rooted and the relations were kept warm throughout the period of Nazi Germany. Certain historical elements are still exposed in the Iranian society to remind us of these relations. Until recently a swastika hung over the entrance of Tehran’s main railway station and a well-known district of Tehran still carries the name; Nazi-abad (urbanized by Nazis).

The Iranian regime has on several occasions made clear that they do not regard Hitler’s actions during WW2 as acts of war or even violations of human rights. As previously reported (https://english.shabtabnews.com/2020/01/06/untangling-the-spiders-web-of-fascism-after-the-fall-of-the-third-reich-part-1/), they even engage in spreading similar views through state funded conferences all over the Middle East. Several high positioned politicians from President Ahmadinejad to the Supreme Leader Ali Khamenei have distinctively denied that the Holocaust even occurred. Actually, the relationship between Iran and Germany reached its peak during the Nazi regime, perhaps fully illustrated by the Nazi’s classifying Iranians as part of the Aryan ancestry. In 1930, Alfred Rosenberg, one of Hitler’s “philosophers” who held important posts in the Nazi Government authored “The Myth of the Twentieth Century” in which he claims that Aryanism had passed from Iranians to Germans.

In 1936, Hitler announced that Iranians would be immune to the Nuremberg Laws (anti-semitic and racist laws protecting German ethnicity and directly excluding all “non-Aryan people from society’s protection”). From 1939-1941, Germany was one of Iran’s top trading partner, making up almost 50% of its total trade. Between 1933 and 1941 the import of German economy increased from 11 percent to nearly 48,7 percent and the export of Iranian economy to Germany increased to 42 percent. This enabled Iran to develop modern air and sea communications with the rest of the world. In many aspects this was similar to the relationship between Turkey and Nazi Germany, with the great distinction that the agreement between Iran and Nazi Germany was even larger than that with Turkey.

Hjalmar Schacht, born in Germany 1877, was a German economist and banker, known in some circles as “The dark wizard of Nazi economics”. He had an enormous influence on the systematic plan to integrate Nazi economics into the Middle East. He was eventually hand-picked by Hitler as the President of the National Bank in Germany. He resurrected the German currency after the hyperinflation of 1923 and had designed economic plans for Nazi Germany’s expansion internationally. Not only did he create these new systems of making money, but he was also (as his alias reveals) a master of disguising the route of the money.

During this period of time Nazi Germany found itself heavily sanctioned from former trade partners and in great need of raw materials. They were now dependent on other countries and their greatest trade was German industrial technology, which was desperately sought after in countries falling behind the swift modernization. Trading with Nazi Germany was designed without foreign currency transfers. Specific institutional complexes were designed for this purpose only, for instance, the Iran Consortium created in 1935, the German-Iranian Chamber of Commerce created in 1936 as well as the Central Banks on each side (Bank Melli of Iran was first founded in 1928 and had a German director). This was of course not only restricted to the Middle East but also Southern Europe and South America.
Iran was now able to industrialize its country and disengage from the Soviet Union. Iranian raw materials included cotton, wool, nickel, copper, food staples, hides and skins, a majority of which would go to military production in Nazi Germany. Hides and skins would for example go into leather and shoes for the German military. Industrial technology from Germany included infrastructure design for their oil industry, refineries, network of medical clinics, the design and building of Tehran hospital, ports and harbors, as well as an expansion of the road and rail-air network, steel, rolling stock, industrial goods etc.

At this point in time, it is clear that Nazi Germany is preparing for war with enormous contracts being signed. Simultaneously, the trades between the Soviet Union and Iran comes to an end. When the war begins in 1939 Iran claims to be neutral. The transaction of economics and raw materials would be mediated through Iran and through the Far East. Iran had become an important transit corridor. The structure and role of the Nazi economy has made its mark on the world economy and ongoing relationships between countries are still very much based on this history today. Post WW2, the German assets in Iran were left to Swedish Diplomats, who had the responsibility to unravel the German industrial position in Iran. Unfortunately, this is not something that has been heard of or made further public from Sweden, which consequently creates a question mark around Sweden’s relationship with Iran?

Current relations between Germany (as well as other European countries) with Iran reflects both countries’ profound and concealed relationship. When the Trump administration put political and economic pressure on Iran it was clear that the Americans had to consider Iran’s most important trade partner; Germany.
Trading with Germany was not restricted to the Nazi period, it continued well after that until present day. In 1952, West Germany was once more Iran’s leading trade partner and during the 1979 Iranian Revolution, trades increased from 2.8 billion Deutsche Marks in 1980 to 7.7 billion Deutsche Marks in 1983. So, there is a long tradition and history that strengthens the trust between these two countries. Following the American sanctions, the E3 group consisting of France, Great Britain and Germany started the Special Purpose Vehicle in an effort to undermine the American sanctions and facilitate legitimate trade with Iran. Likewise, in 1995 when president Clinton prohibited trade with the Iranians, Germany opposed the efforts of international sanctions.

So, history tells us that these two countries have had shared interests in ideology (authoritarianism, fascism) and shared interests in economic power and some might even argue a shared understanding of their public image. But how is it possible and for how much longer can Germany keep up this friendly appearance with one of the greatest dictatorships in the world? And this does not only apply to Germany but many more European countries facilitating the influence of organizations such as New Horizon and the IRCG.

The new president of Iran should be in prison, not power