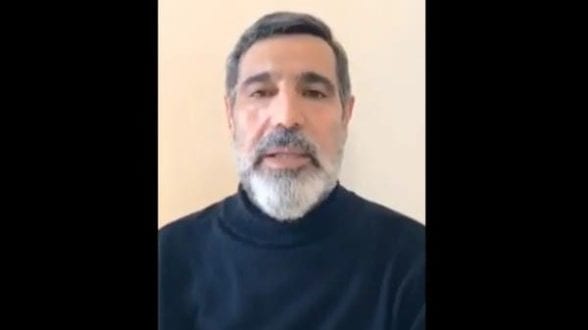 Radiofarda – The spokesman for the Islamic Republic’s judiciary announced on August 6, that Judge Gholamreza Mansouri who died in Romania in suspicious circumstances in June was buried in Mashhad.

Only four days earlier, the former Judge’s brother had announced that his family was able to identify the body. The spokesman, Gholam Hossein Esmaeili has not specified whether Mansouri’s family and relatives identified the body in the past few days.

Judge Gholamreza Mansouri wanted in a large corruption case in Iran had somehow fled the country last year. In June it was discovered he was in Europe; possibly Germany. Both the Iranian government and human rights organizations began pursuing his arrest. Iran wanted him extradited and human rights activists wanted him tried in Europe for violations he committed as a judge, specially by summarily convicting journalists.

In mid- June he surfaced in Romania where police arrested him. As he was waiting for extradition hearings, he was found dead in a hotel and so far, it is not clear if he fell from an upper floor to his death by accident, suicide or murder.

Without elaboration, the Judiciary spokesman, said, “A closer look at the incident still requires more information from Romania, such as images taken from the hotel’s camera and documents belonging to him.”

Mansouri was one of the most trusted judges in the judiciary during Ayatollah Sadeq Amoli Larijani’s term as the Islamic Republic’s Chief Justice (2009-19). But many associates of Larijani were indicted under the new Judiciary chief Ebrahim Raeesi, including judge Mansouri. He was accused of receiving 500,000 euros bribe from Akbar Tabari, a former deputy of Amoli Larijani.

Immediately after Tabari was arrested and charged with millions of dollars of financial corruption, Judge Mansouri fled Iran, and months later surfaced in Bucharest, Romania.

While expressing doubts about the body’s identity, his brother said that the forensic officers took a sample of the DNA from all members of the Judge’s family.

No report on the results has been published so far.

However, according to Hamshahri Online, Mansouri’s niece has confirmed that her uncle has been buried in Mashhad, northeast Iran.