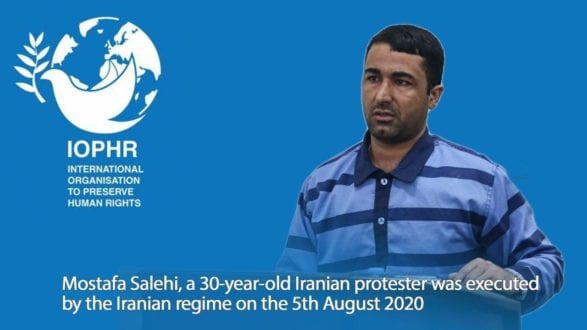 IOPHR Statement in relation to the execution of Mr. Mostafa Salehi, a 30-year-old Iranian citizen.

Shabtabnews – In a recent statement IOPHR condemns the execution of Mostafa Salehi whose only crime was to take part in the December 2016/ January 2017 peaceful protest against the 300% increase in the price of gasoline in Esfahan province.

The statement also states that “Mr. Salehi was charged with murder, after his arrest in order to justify his execution! None of which they could prove, or even show that he actually possessed any firearms, ammunition, or any weapon, at the time of his arrest by the police. Also ” Mr Salehi had been subjected to all kinds of severe torture for more than a year, in order to force him to sign a confession to the crimes alleged by the Iranian regime, which he repeatedly refused to do.”

The statement further states that the Iranian regime “lacks the necessary legitimacy to represent the Iranian people, both domestically, and internationally.  Therefore, the continued survival of such a brutal unjust regime, is both to the detriment of the Iranian citizens, and world peace and security; as it clearly lacks international legitimacy!”

IOPHR also asks for “the suspension of all economic and political relations of all governments, especially EU member states, with the Iranian regime. Moreover, IOPHR asks these international bodies to increase their pressure on the Iranian regime, and push for national free referendum in Iran under the auspices of international observers, like the United Nations, and the European Union.”

For full details of statement see below link: