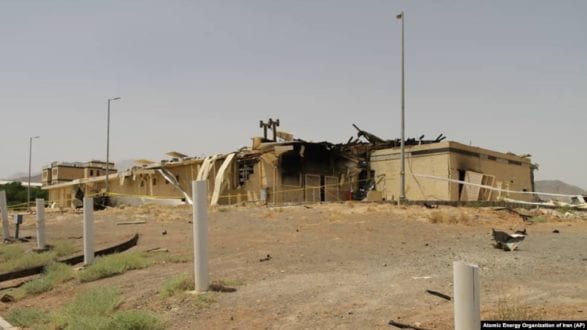 RFL/RE – A member of the National Security and Foreign Policy Committee of Iran’s parliament says a blast at the Natanz nuclear complex was caused by a “security breach.”

Speaking on July 22, lawmaker Javad Karimi Qodusi ruled out “a strike on the complex by an external object” as the cause of the July 3 blast, appearing to deny that the site had been targeted in an air strike.

“If it was from the outside, we should have seen shrapnel, but there are absolutely no remnants left on the site,” he said in an interview with the parliament’s news site ICANA following his visit to Natanz.

“A breach in security is our definitive conclusion,“ he said, without elaborating.

Iran’s top security body said on July 3 that the cause of the incident had been determined, but it declined to release details, citing security reasons.

Some Iranian officials said it could have been a cyberattack.

Natanz is the Islamic republic’s main uranium enrichment center, located some 250 kilometers south of Tehran, and includes facilities built under almost 8 meters of concrete to offer protection from air strikes.

The site is one of several Iranian facilities monitored by inspectors of the International Atomic Energy Agency (IAEA), the UN’s nuclear watchdog.

The incident at Natanz came amid reports of several fires or explosions at Iranian military and industrial sites, which has led to speculation about sabotage acts by foreign governments, including Israel.

“There are thousands of cyberattacks on the country’s infrastructure on a daily basis — which is nothing new — most of which are repelled by our defense systems,” Iranian media quoted Musavi as telling reporters.

In recent months, there have been several cyberattacks that were wider in scope, and technical and forensic analyses have identified “governments or groups” who were behind the attacks, he said, without naming them.

Musavi also said fires in forests, refineries and other locations were common in summer.

In an article in early July, the state news agency IRNA addressed what it called the possibility of sabotage by enemies such as Israel and the United States, although it stopped short of accusing either directly.

Israel’s defense minister said on July 5 that his country was not “necessarily” behind every mysterious incident in Iran.