Iran Infections Remain High While All Corornavirus Restrictions Are Lifted

Radiofarda – Iran has completely lifted all coronavirus restrictions across the country while according to health officials infections still remain high at more than 2,000 new cases every day.

Speaking at a meeting of the National Coronavirus Combat Taskforce on Saturday, President Hassan Rouhani said mosques have opened for prayers throughout the country, restrictions on the opening hours of shopping centers and malls which had to close at 6:00 pm have been lifted and government employees are back to work now.

Meanwhile, the number of newly identified cases of COVID-19 that dropped to below 2,000 in April has risen again. According to the latest official statement on Friday, 2,282 new cases were identified in the last 24-hour reporting period. The previous day there were more than 2,800 infections; the highest since April 2. The highest number of new cases, 3,111, was reported on March 31.

The number of COVID-19 deaths announced on Friday was 57. The highest number of coronavirus deaths in Iran in one day, 157, was registered on April 5.SEE ALSO:Getting It In The Gut: Iran Sees Rise In Gastrointestinal Coronavirus Infections

The Health Ministry Spokesman Dr. Kianoush Jahanpur on Saturday said the total number of COVID-19 cases and death toll in the country have respectively risen to 148,950 and 7,734. So far, 915,998 coronavirus tests have been done, he said. Iran is the worst-affected country in the Middle East.

Dr. Jahanpur also pointed out that the southwestern province of Khuzestan is still considered as a “red zone” due to the higher number of infections and deaths and the situation in several other provinces including East and West Azarbaijan, Lorestan, Kordestan and Kermanshah in the west of the country, the central province of Esfahan and the southern provinces of Hormozgan is still alarming.

The health ministry has divided the country into white, yellow and red zones on the basis of the number of cases of COVID-19 infection and death.

Iran’s economy, already under the burden of U.S sanctions that were re-introduced by President Donald Trump, has also been hit hard by the pandemic. According to President Rouhani the service sector has experienced the worst among all sectors of the economy since the breakout in February.

Speaking at a ceremony held by the Information and Communication Technology Ministry to unveil new projects on May 28, Rouhani urged investment in digital economy, particularly in view of the coronavirus pandemic. Digital economy only makes up 6.5 percent of the Iranian economy while in some countries it is as big as 14 percent, Rouhani said.

President Rouhani on Saturday stressed that people must believe that “going back to normal” is not possible in the short term and they need to consider the changed lifestyle for years to come. “A new wave [of the pandemic] is possible if people do not take notice of health warnings,” he said.

In a program on the state-run television on Friday, the Deputy Health Minister Iraj Harirchi said the observance of social distancing rules by people has dropped from 90 percent to 40 percent. According to Harirchi the number of those who will stay home for the fear of the virus has also dropped from 80 percent to 32 percent now.

In the capital Tehran Deputy Mayor Manaf Hashemi has said that tougher measures will be implemented about wearing masks. “Those who are not wearing masks will not be allowed to enter underground stations,” he said. 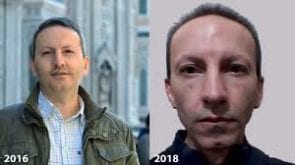