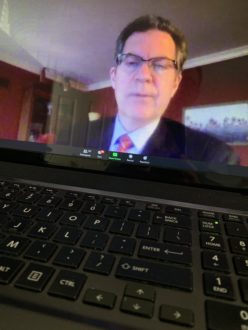 Meeting on The Human Rights violations of the Iran government, and the plight of prisoners of conscience, and religious minorities in Iran.

Shabtabnews – Today in a virtual meeting attended by various speakers including – Ambassador Sam Brownback , the US Ambassador at Large for International Religious Freedom , about the plight  of prisoners of conscience, and religious minorities in Iran.

During this meeting which was attended by Dr Hamid Gharagozloo the representative of IOPHR (International organisation for preservation of human rights), made a presentation on the situation of religious minorities such as Gonabadi Sufis (exiles and transfers in prisons), Bahia’s , and the rampant executions/hangings, and human rights issues in Iran.