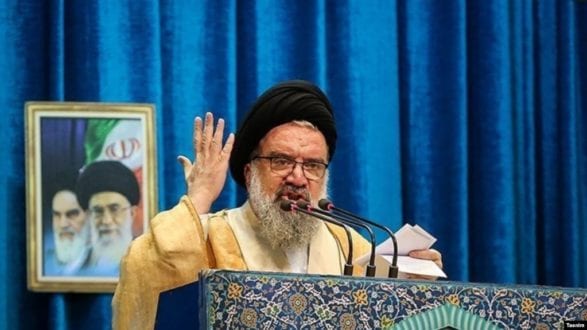 On October 9, Rouhani had warned the country’s powerful Guardian Council (GC) to avoid stricter vetting of candidates in the upcoming parliamentary elections next February.

“We should not believe that the tighter the filter, the better will be the results,” Rouhani asserted during a cabinet meeting last Wednesday.

As a control mechanism to prevent independent and opposition candidates to hold elected office, the Islamic Republic’s constitution has empowered the GC to review all candidates and pick a handful who are loyal to the regime.

In the months leading to parliamentary election in February 2020, the issue of strict vetting of candidates is again on the forefront. So-called reformists, who are divided, fear the GC will disqualify most of them and hardliners will pack the next parliament./**/ /**/ /**/ SEE ALSO:Voter Indifference Is A Challenge For The Islamic Republic

Praising the first Islamic Republic parliamentary elections held immediately after the downfall of Iran’s last monarch Rouhani maintained, “Back then, there was no Council of Guardians or so many monitoring offices we have today. Nevertheless, we had the best-ever parliamentary election, and its result was also the best Majles ever.”

Firing back, Tehran’s “temporary” Friday Prayer Imam, Ahmad Khatami, maintained on Friday that even the first Majles election after the establishment of the Islamic Republic was held under tight supervision.

Without directly naming Rouhani, 59-year-old Ahmad Khatami asserted that “some comments” smell of attempts to polarize the Iranian society, while polarization is against the interests of an Islamic society.

Dismissing Rouhani’s remark, Khatami admitted that in the first parliamentary election after the downfall of Shah Mohammad Reza Pahlavi in Iran, the Guardian Council was not established, but there was a delegation appointed by the founder of the Islamic Republic, Ayatollah Ruhollah Khomeini, assigned to supervise the procedure strictly.

The first national parliamentary election in the Islamic Republic was held on March 14, 1980, and the mid-ranking cleric Rouhani was elected as the representative of his home town Semnan.

The leader of MKO, an revolutionary underground group that had helped the downfall of the Shah of Iran and assisting Khomeini to consolidate his power over the country, was among the candidates in the first national parliamentary elections in 1980./**/ /**/ /**/ SEE ALSO:Rouhani Succumbs To Khamenei’s Will To Ensure His Political Survival

While Massoud Rajavi garnered 530,000 votes in the first round, he was disqualified after Khomeini declared that those who had not voted for the Islamic Republic’s Constitution should not have the right to seek a parliamentary seat.

Rajavi was kicked out of the second round, forcing him to mobilize his followers for a showdown with the elderly Ayatollah Khomeini.

Nonetheless, many analysts and historians believe that the first parliament after the establishment of the Islamic Republic in Iran counts as the most pluralistic Majles in the country.

Nevertheless, the conservatives who have the upper hand in Iran insist that all elections held in the country should strictly be monitored and supervised, lest “anti-revolutionary” nominees gain a seat in Majles and the Assembly of Experts, or even become president.

However, such strict monitoring and supervision are not stipulated by the Islamic Republic’s Constitution.

Giving the right of “approbation supervision” to the GC dates back to three years after Ayatollah Ali Khamenei became Supreme Leader of the Islamic Republic.

Now, the Guardian council, packed with conservative supporters of Khamenei is seen as the most important impediment to more diversity in Iran’s parliament and any meaningful political or economic reforms.