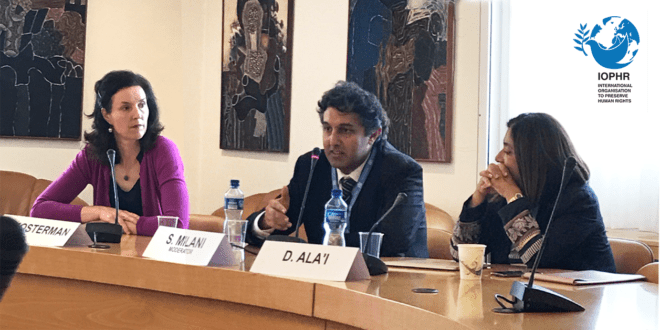 UN meeting on rights of religious minorities in Iran

Shabtabnews – Yesterday, 23rd of September, within UN human rights council building in Geneva, there was an open meeting on the Iranian regimes’ violations of rights of religious minorities.

The gathering was attended by Dr Javid Rehman UN special Rapporteur on human rights in Iran, Ms Diane Alahi the member of Baha’i international community, Ms Barbara Mosterman a representative of IOPHR (International organisation for preservation of human rights ) and Mr Shahin Milani a member of Iran human rights documentation centre and the moderator of the meeting.

Dr Rehman, who spoke at the gathering via Skype, in his speech set out series of recommendations that the Iranian regime must follow in order to fulfil its obligations as signatory to UN human rights charter. Dr Rehman also highlighted many facts regarding the discrimination and persecution of religious minorities by the Iranian government in practice through its discriminative constitutional law.

Ms Alahi, in her speech highlighted the plights of Baha’i’s in Iran and discrimination and oppression they face on a daily basis living in Iran, which extend from being excluded from government jobs, university places to general suppression by the Iranian regime . Ms Alahi also stressed the importance of looking at the ongoing oppression of religious minorities in Iran and reminds us of an important statement of the late special rapporteur on freedom of religion or belief, Abdelfattah Amor that “it is not up to a state to decide what is religion and what is not”.

Ms Mosterman in her speech stated that: “Unfortunately, the human rights situation in Iran not only is not improving, but its steadily deteriorating. Especially, when it comes to the rights of ethnic and religious minorities, even though most of these groups are not involved in any political activity. One only needs to have a brief look at the situations faced by few religious minorities such as: the Gonabadi Sufis, the Iranian Sunnis, Christian converts, Baha’i compatriots, in order to appreciate the dismal situations they are faced with, on daily basis.”

She then went to highlight the conditions faced by Gonabadi Sufis in Iran where she outlined the imprisonment of both men and women Sufis in very harsh conditions simply because of their faith, which is based on peace, love and tolerance regardless of beliefs, and also the every day acts of suppression they face like exclusion from governmental job, university place to the house arrest, exile and poisoning of their 91 year old spiritual leader Dr Noor Ali Tabandeh. She then summarised the human right situation in Iran by saying : “The story of oppression in Iran is not only about the Sufis, but also concerns any group of people that don’t adhere to “extremist Islamic interpretation of the Iranian Government”.