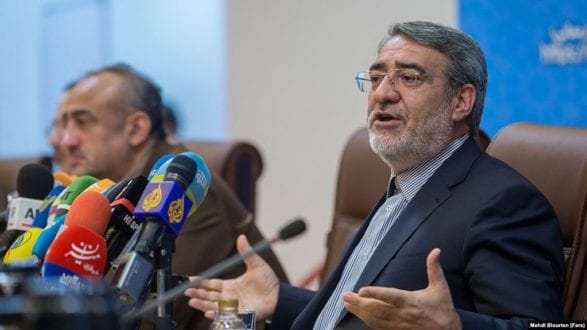 radiofarda – Despite growing discontent among people in Iran, the number of protests in the country has decreased, the Islamic Republic Minister of Interior claimed on Sunday, August 18.

Speaking to deputy governors in the Iranian capital Tehran, Abdol Reza Rahmani Fazli admitted, “While people’s dissatisfaction has increased [in recent months], the number of protest rallies across the country shows a 38% drop.”

Expanding on the reasons behind the claimed drop, Rahmani implicitly referred to the latest show-off between Tehran and Washington, adding that since people understand the country’s current situation, they are more reluctant to attend protest demonstrations.

However, international human rights organizations have recently deplored the Islamic Republic for applying more force and arrests against dissidents across Iran.

Dozens of people have been placed behind bars in the past weeks merely for circulating letters, demanding their fundamental rights, or protesting hardship.

Violations of human rights since spring of 2018 have significantly increased, said Amnesty International.

“2018 will go down in history as a ‘year of shame’ for Iran,” said Philip Luther, Amnesty’s Middle East and North Africa research and advocacy director.

“Iran’s authorities sought to stifle any sign of dissent by stepping up their crackdown on the rights to freedom of expression, association, and peaceful assembly and carrying out mass arrests of protesters.”

Meanwhile, Rahmani Fazli has repeatedly cautioned that the widespread anti-regime rallies and demonstrations that caught the Islamic Republic’s off guard in late December 2017, early January 2018, merely need a spark to reignite.