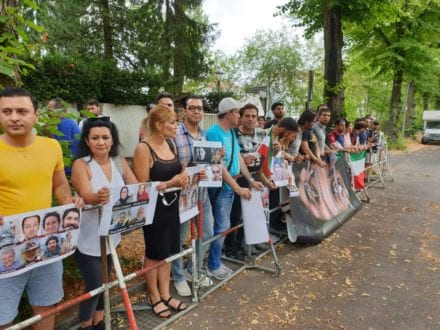 Protests against human rights violations of Iranian regime in Berlin

Shabtabnews – Yesterday many Iranians and German citizens gathered outside the Iranian Embassy to protest against Iranian regime’s human rights violations against its citizens, in particular against the rights of religious minorities and prisoners of conscience.

In the gathering the protesters who, originated from variety of groups (like
the International Organisation to Preserve Human Rights (IOPHR) and IGFM (the International Geselleschaft Fur Menschenrechte ) demanded that the Iranian regime put an end to its oppression of religious minorities like Bahia’s , Christians and Sufis .

At the protest the German representative for religious freedom of the Protestant church, Uwe Heimowsky, asked the German authorities to not to return Bahia’s , Christian Converts and Sufis who are seeking asylum in Germany. The protest was also attended by Volker Kauder the member of CDU .

During the protests one of the protesters, Shirin Javid, asked the German Government to not allow the Iranian regime to get away with violating the rights of its citizens