NYT— Less than a year ago, he was running a thriving computer accessories business, driving a new car and renting a comfortable two-bedroom apartment in the center of Tehran. But last month, Kaveh Taymouri found himself riding a rusty motorcycle on his hourlong commute to his family’s new lodgings, a 485-square-foot apartment in one of the city’s worst neighborhoods, next to its sprawling cemetery.

When he arrived home one recent night at 10:30 from his new job at an arcade, there was no food on the stove. The sandwich he had for lunch would have to do.

Nevertheless, his wife and former business partner, Reihaneh, said she thought his mood was improving.

“At least he has stopped screaming in his sleep,” she said.

Before their “downfall,” as they call it, the Taymouris were the model middle-class Iranian family, prosperous college-educated business owners who made enough money to save for a down payment on their own home. Now, they are a model for a different sort: the millions of middle-class Iranians who almost overnight have seen their lives shrink, dragged down by economic forces beyond their control.

Iran’s economy is in a shambles, savaged by years of mismanagement and renewed economic sanctions.

The government has expanded the money supply by more than 30 percent annually for more than a decade, using the extra cash to cover budget deficits and other expenses. In the United States, by comparison, a broad measure of the money supply has increased by an annual average of 6.4 percent over the last decade, according to the Federal Reserve.

As a result of Iran’s rapid expansion of the money supply, says Djavad Salehi-Isfahani, a professor of economics at Virginia Tech University, inflation has exploded and by official figures is now running at an annual rate of 35 percent, compared with below 10 percent a year ago.

President Trump’s decision to leave the nuclear deal, known formally as the Joint Comprehensive Plan of Action, or J.C.P.O.A., and to reimpose harsh economic sanctions prompted the other major economic disaster to befall Iran: a collapse in its currency, Mr. Salehi-Isfahani said. The rial lost about 70 percent against the dollar before strengthening recently, but its rates are still fluctuating heavily.

Iranians commute by bus in Tehran.CreditArash Khamooshi for The New York Times 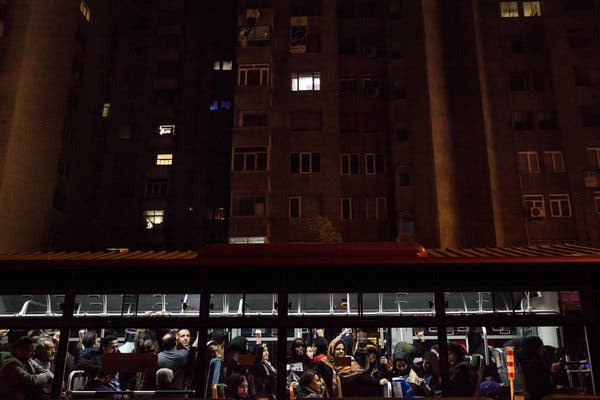 “The withdrawal busted the expectations for an economic boom created by the J.C.P.O.A. and Iran’s return to the global economy, which was expected to boost oil exports and foreign investment,” he said. “The reversal caused people to convert their rials into other assets, mainly dollars and gold.”

By raising the cost of imports, the currency collapse has reinforced the inflationary surge and decimated small businesses that, like the Taymouris’, rely on imported goods.

Mr. Taymouri, saying it was best to let his money — or lack of it — do the talking, sat down and calculated the financial calamity that had befallen the family in the past year. Their monthly income fell from 50 million rials, or about $1,400, a year ago to 10 million rials, or $90, at the current heavily devalued rate.

“If someone had ever told me I would one day live like this, I would’ve laughed,” Mr. Taymouri said bitterly, before falling silent. Finally, his wife spoke.

“I’m not really that sad, because we are not alone,” she said. “It’s happening to so many people.”

Mr. Taymouri attributed the fall in the currency to speculators as well as the government “for just having stood by.” Others blame Mr. Trump.

“It’s really because of Trump,” said Nasim Marashi, the 29-year-old author of a best-selling book, “Autumn Is the Last Season.” The book, on the lives of three middle-class young women in Tehran, has had 35 print runs in four years. “He left the nuclear agreement, not Iran.”

Iran, with a population of about 80 million, has long had a large and thriving middle class, covering roughly everyone from bus drivers to lawyers and doctors, and earning an average of $700 a month in local currency, according to government officials. That income was frequently padded by unreported side businesses in the country’s large black market and government subsidies that lowered the cost of utilities, food and gasoline.

Politically quite influential, Iran’s middle class has consistently favored candidates like the current president, Hassan Rouhani, who support better relations with the West. But seldom have they been under as much economic pressure as they are today. Recently at least two people have been hanged after they were convicted in highly publicized trials for manipulating markets.

Nasim Marashi, a writer, sits in front of her library at her home in Tehran.CreditArash Khamooshi for The New York Times 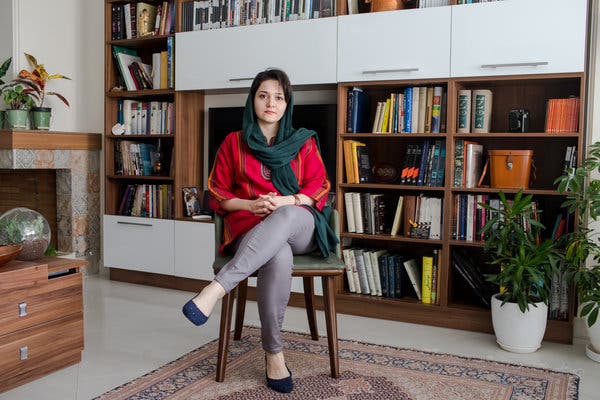 In a sign that the government is taking the issue seriously, Mr. Rouhani introduced his administration’s budget on Tuesday, and it included more support for state employees and more subsidies on basic goods.

Not all have suffered as much as the Taymouris, whose business was so vulnerable to the currency collapse. But Abbas Torkan, a former adviser to Mr. Rouhani, said recently that the middle class had shrunk by 50 percent.

Even for those in higher income ranges, the difficult times have meant a sudden lifestyle change.

Outwardly, Tehran looks every bit the bustling metropolis it has been. New restaurants are still opening. An Iranian theater version of “Les Misérables” sells out every night for 3,500 people who pay the equivalent of $16 a person. But cracks are appearing.

In supermarkets, where the cost of Red Bull, for example, has quadrupled, people can be seen carefully studying the prices. Some imported products, like Purina pet food, have vanished entirely.

The pain many people are feeling may just be the start, said Faezeh Forouzan, an Iranian economist. “For the short term, those better off in the middle class will respond by changing their lifestyle, eliminating luxuries and excess,” she said. “But in the future, all will suffer as a result of a lack of investment in creating jobs.”

For the Taymouris, the pain was seemingly instantaneous. They met five years ago at work, and between stealing kisses by the copy machine, they figured out they could make more money with their own business selling computer accessories.

Mr. Taymouri’s oldest son sleeps on his mother’s lap while he plays with his baby at home.CreditArash Khamooshi for The New York Times 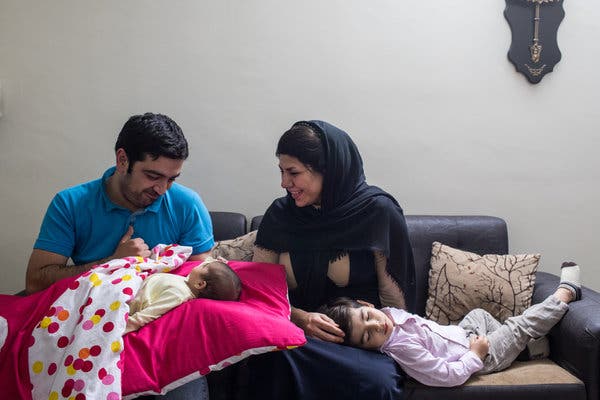 From their shop in the center of Tehran, the couple would buy keyboards, cables and other computer accessories from wholesalers. Ms. Taymouri would then resell them in the provinces, while her husband took care of the shop and short-term financing for the business.

A son was born, and just weeks before everything came crashing down, they happily informed their parents that they were expecting a second child.

But in January, the rial began to slide, and goods like the Taymouris’ accessories that were priced in dollars and euros rapidly became unaffordable for most Iranians. Ms. Taymouri’s phone stopped ringing, and sales orders dried up.

A Western Digital hard disk still costs around the equivalent of $90 in Iran, but in the local currency it soared to 18 million rials from 3 million, Ms. Taymouri said. “When your customers make only twice that a month,” she added, “you can understand how our sales went down to zero.”

At the same time, Mr. Taymouri was getting plenty of calls — from the wholesalers he had bought accessories from on credit.

“They were asking for their money, but clients in the provinces weren’t paying us back and we were not selling anything,” he said.

One night, Ms. Taymouri said, “he just came home, dropped on the couch and said, ‘It’s over.’”

In a country that still puts debtors in jail, the Taymouris had no choice but to make good on their debts. They sold the car, their furniture and the carpets they had been given as wedding presents.

Mr. Taymouri sold the shop to the arcade man on the condition that he could work there. Then they moved to their current apartment, which has a communal shower in the hallway. 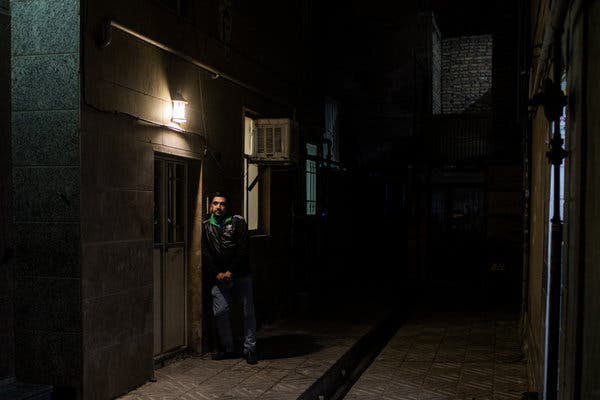 “We don’t like it here,” he said, gesturing to the cemetery, one of the largest in the world. “We had been planning to move uptown, not next to the dead.”

Mr. Taymouri brought out his infant daughter, Anita, from the tiny bedroom, and his wife started crying.

“I was just pregnant when everything suddenly turned upside down in our lives,” she said. “I admit that I thought of having an abortion. But despite all of this, I’m so happy we have her now.”

Even Iranians in the upper strata of the middle class, like Ms. Marashi, are feeling the pinch. Malmal, her white Persian cat, played in the background as Ms. Marashi’s husband, a filmmaker, rummaged in the refrigerator.

“We are very lucky that we bought this house last year,” she said. “Now, we would never be able to afford it.”

In her book, the three main characters face setbacks after the anti-government protests of 2009. One gets fired from her job as a reporter, the other becomes depressed about society and the third dreams of emigration but cannot get a visa.

“Had I written the book now, there would be no reference to visas, as going abroad has become too expensive,” she said. “Getting fired as a journalist is still possible, but more so because paper has gotten too expensive and publications are closing.”

The couple had been planning a European tour around an award she had won in Italy, but a ticket now costs more than she makes in two months, she said. “So we canceled.”

Still, Ms. Marashi said things could be worse, thinking of people who lived through the 1980s war with Iraq.

“We have had much harder times,” she said.

An earlier version of this article misspelled the given name of a best-selling author in Iran. She is Nasim Marashi, not Narsin.