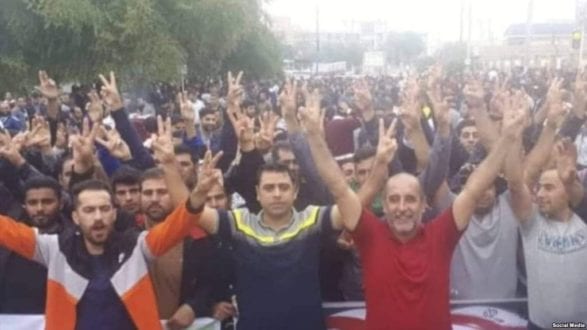 Radiofarda – A labor strike at the Haft-Tappeh Sugarcane Mill in southeastern Iran is entering its fourth consecutive week, with workers demanding overdue wages and a return of the mill to public ownership.

In addition to payment of back wages, workers are demanding an immediate and unconditional release of their representative, Esmaeil Bakhshi, who has been detained since November 18 along with a young journalist and civil rights activist, Ms. Sepideh Qolian. According to the judicial authorities, the two are charged with “security crimes” in connection to their involvement in the protests.

On Monday, the head of Iran’s Judiciary warned the workers not to become an instrument of “the enemy”. But workers on Tuesday defied the warnings and in larger numbers than in previous days chanted slogans against the government and implicitly against the Supreme Leader Ali Khamenei.

Meanwhile, Ministry of Cooperatives, Labor, and Social Welfare representative Karim Yavari has called upon the workers to return to work and improve relations with the mill’s private owners in order to redress their grievances.

The manager and main owner of the mill, Omid Assadbeigi, published a video message Sunday calling for an end to the strike. But his video message presents a mystery in the saga of the workers.

Protests Continue In Shush As Many Workers, Labor Leaders Arrested

Earlier, several judicial and governmental authorities, including the judiciary’s spokesman, mid-ranking cleric Gholamhossein Mohseni Ejei, had given conflicting accounts about the disappearance of the main owner none of them were willing to name. While one official said he was on the run for financial improprieties, another official claimed he was in jail. Now, according to labor sources, Mr. Assadbeigi himself is the mysterious, unnamed owner who has suddenly surfaced again, asking the workers to stop their strike.

The mill, located near city of Shush in the oil-rich province of Khuzestan, is the only factory of its kind in the country. It was built nearly half a century ago during the reign of the last Shah of Iran, Mohammad Reza Pahlavi. The agro-industrial complex was always lucrative until the government decided to privatize it in a murky transaction in 2015. The complex, with a total area of 24 thousand hectares, was sold to a private buyer for a down payment of roughly two million dollars. It is not clear if any further payments have been made.

The striking workers accuse the private owners of gross mismanagement and demand a return of the complex to state ownership or that the workers be allowed to manage it.

Meanwhile, 121 kilometers (76 miles) south of Shish, Iran National Steel Industrial Group (INSIG) workers protested November 25 outside the governor’s office in the city of Ahvaz. Nearly 4,000 steel workers have been on strike since November 10. They are demanding payment of overdue wages, improved workplace safety, and fresh investment to boost production. For years the INSIG plants have suffered from mismanagement and lack of capital, leaving many productions lines idle.

Riot police reportedly attacked the protestors when they attempted to cross a bridge and continue their march through the city center.

Steel workers have gone on strike several times in recent months and dozens have been arrested or detained.

INSIG, originally a steel plant founded in 1963 during Shah Mohammad Reza Pahlavi’s reign, was privatized in 2010 in an unclear process and sold to a notorious Iranian tycoon, Mah Afarid Khosravi, aka Amir Mansour Arya, described at the time as the richest man in the country with more than $1 billion in net worth.

In 2014, INSIG was taken over by the Islamic Republic’s Judiciary after Khosravi was executed for financial fraud.