Radiofarda – For the 24th time since last March, the facilities diverting water from the city of Isfahan, central Iran to the neighboring Yazd Province, have been sabotaged on Sunday, November 25, the Islamic Republic’s official news agency (IRNA) reported.

After bringing back peace, security and order to the area, Karbalaei Akrami noted, the damage and the ways to address it will be assessed.

His comment implicitly acknowledges that angry protests by farmers in the area have not yet subsided.

The voice on this video speaks of clashes with security forces and says “farmers need help”.

Furthermore, videos on social media also show that clashes between security forces and enraged farmers were still going on later on Sunday.

Some other images show that farmers from Isfahan, assembled around the pipes, destroyed the facility, using loaders.

Based on information on social media, furious Isfahan farmers have given the authorities 48 hours to address their demands; otherwise, they will totally destroy the whole facility.

Transferring water from Isfahan to its arid neighboring province, Yazd, was vandalized and disrupted by unknown attackers on Friday November 16, but the facilities were repaired, and the operation went back to normal on Saturday, November 17.

Eastern parts of Isfahan province, with a population of 300,000 who are mainly farmers, has been hit by a severe water scarcity since the project for transferring water to Yazd has become operational.

The person addressing the crowd tells security forces to defend the rights of the farmers. 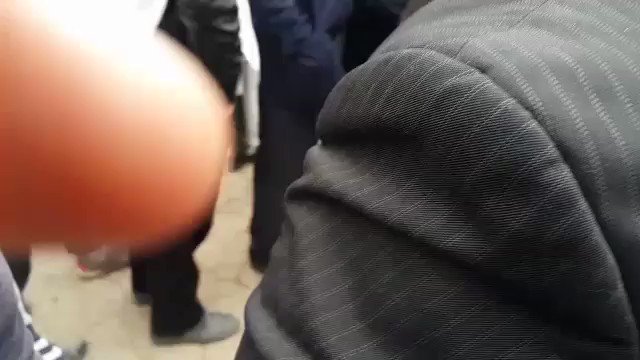 The farmers held several rounds of protests in March and April, demanding action by the government, arguing they have been unable to plant crops for a few seasons.

Struggling with hardship, they have repeatedly accused a number of former and current officials, including Energy Minister, Reza Ardakanian and pro-reform former President Mohammad Khatami, of discrimination against Isfahan in favor of their place of birth, Yazd.

Responding to the protests, the government has promised to tackle the farmers’ demands, immediately after the project for Third Koohrang Tunnel becomes operational. That is a project to transfer more water from the mountainous region west and southwest of Isfahan to more arid eastern regions.

27 people are talking about this

Meanwhile, thousands of the people in the province of Chahar Mahal and Bakhtiari have repeatedly held protests against transferring their provincial water to the neighboring province, Isfahan.

Furthermore, other water transfer projects across the country have led to enraged protest rallies, including in the oil-rich province of Khuzestan.

Provinces of Bushehr, Fars, and Kohgilouyeh and Boyer Ahmad have also been the scene of protest rallies against the government’s “water mismanagement”.

In the meantime, the Islamic Republic’s minister of Interior, Abdor-Reza Rahmani Fazli has warned that Iran’s profile will be totally changed in five years if the current drought continued.

“If the drought continues, Iran will be facing a great disaster”, Rahmani Fazli has ominously predicted.

Echoing Rahmani Fazli’s comments, the minister of Energy, Reza Ardakanian has also admitted that Iran is struggling with the “monster” of water shortage.