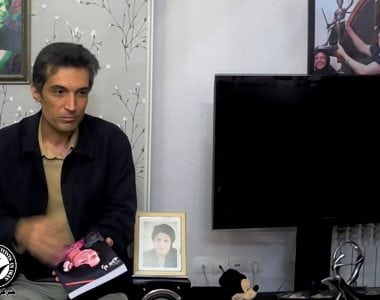 Human Rights Activists News Agency (HRANA)- In protest of the imprisonment of his comrade Reza Khandan, civil Rights Activist Farhad Meysami has now been starving himself for 53 consecutive days.

In a visit to the Evin Prison clinic September 22nd, according to a close source, doctors noted Meysami’s 42-pound weight loss and steep drop in blood pressure and urged him to be admitted to the clinic. Meysami refused, persistent in his requests to be transferred to an outside hospital.

Shortly thereafter, prison authorities, including the prison director, came to visit Meysami, who reiterated to them the sole condition in which he will end his hunger strike: the dropping of all charges against Reza Khandan.

Farhad Meysami was arrested in his personal study on July 31st. He was originally charged with “gathering and collusion aimed at disrupting national security,”; “propaganda against the regime”; and “insulting hijab, a necessary and sacred element of Islam.”

On September 3rd, however, Branch 7 of the Evin prosecutor’s interrogation department claimed that charges have since changed, with the last one replaced with “spreading corruption and prostitution.”

Human Rights Watch and Amnesty International have both asked for Meysami’s release.