During this meeting, Dr Gharahgozloo from IOPHR, discussed the suppression of religious diversity and the systematic abuses and oppression adherents of various faiths and schools of belief in Iran by the Iranian authorities. In this meeting, which was held from 2:00 pm to 4:00 pm and was also attended by the representatives from Human Rights Watch, the conditions and persecution of Christian converts, Baha’is, Jews and followers of other religions and faiths in Iran were also discussed. 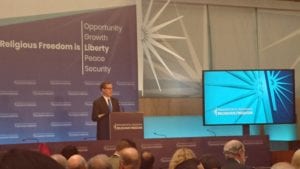 After the end of regular meeting and in a special session, there were also discussions in regards to continuous repression of the rights of the Gonabadi dervishes by the Iranian regime during the thirty-nine years of rule of the Velayat-e faqih (supremacy of clergy) in Iran. 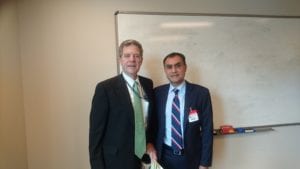 Dr Gharahgozloo  and Mr Sam Brownback from the state department

In this special session, analysts and experts from the United States, stated, “That the dervishes of every sort and manner are peaceful and affluent people, but unfortunately, the security institutions within Iran, are suspicious and distrustful of the Sufis and view them as a potential security threat, and thus constantly oppress and persecute them under various pretexts. The recent, a very cryptic incident in the heart of Tehran, has also provided the Iranian regime with the excuse to further curtail the freedom of the Dervishes. Since this incident, hundreds of Sufis have been arrested and have been sentenced to over two thousand years in prison and given other heavy and disproportionate sentences by the despotic Iranian Judiciary. Furthermore, a number of Dervishes have died under torture whilst in detention and in prisons, and as recent events have clearly shown the Iranian judicial system is willing to execute Dervishes based on unproven allegations and through illegal trials. The people in the meeting also strongly expressed concerns and regret about the long and illegal house arrest of Dr Noor Ali Tabandeh (Majzoub –Ali-Shah), the head of the Gonabadi Dervishes, by the Iranian authorities.

It should be also noted that the US Department of State has through its representatives has on number of occasions expressed concern and condemnation of the Iranian regime for violating the rights Gonabadi Dervishes’, and in fact the US Secretary of State, Mike Pompeo in a recent speech personally expressed his concern at the house arrest of the Gonabadi Dervish leader, Dr Noor Ali Tabandeh, in the most strongest terms.