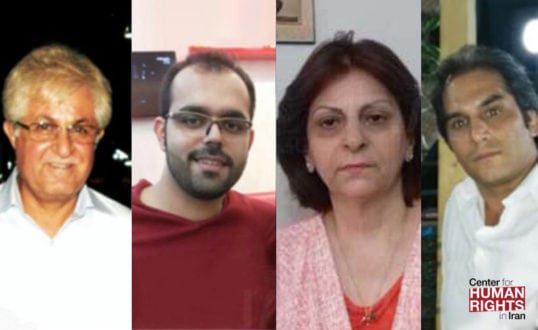 iranhumanrights – Four Christians in Iran, including two converts, have appealed their prison sentences for alleged missionary activities, arguing that they’re innocent of the charges.

“It is our expectation that the charges will be dropped and their sentences struck down because there is no evidence to prove the charges against them,” Dabrina Bet Tamraz told the Center for Human Rights in Iran (CHRI) on August 27, 2018.

“Fondness for Christianity and conducting religious services cannot be the basis for incarceration,” added Tamraz, the daughter of Assyrian pastor Victor Bet Tamraz and Shamiram Isavi, who were both sentenced by a Revolutionary Court in Iran to 10 years and five years in prison respectively.

The couple is currently free on bail along with their two codefendants, Christian converts Hadi Asgari and Amin Afshar Naderi, who had been sentenced to 10 years and 15 years in prison respectively.

Isavi was charged with “acting against national security by organizing home churches, attending Christian seminars abroad and training Christian leaders in Iran for the purpose of espionage.”

To date, there has been one hearing for these Christians’ cases at Branch 36 of the Appeals Court. The four are expecting to appear at two more hearings before the judge makes a ruling.

“My father and mother have been given heavy sentences without any evidence,” Dabrina Bet Tamraz said in an interview with CHRI. “The verdict against my father says he attended religious seminars in the US, Sweden and the Netherlands even though he has never stepped foot in those countries.”

Victor Bet Tamraz headed the last Persian-language church in Iran, the Pentecostal Assyrian church on Sharara St. in Tehran, before it was closed down by local authorities in March 2009.

“When the church was still open, the prayers were said in Persian. I speak the Assyrian language but I’m not fluent in reading and writing, so it was easier to recite the hymns and prayers in Persian,” Dabrina Bet Tamraz said.

She continued: “Using the Persian language in church cannot be considered a crime. My father and mother never preached Christianity on the streets. When the authorities closed down the church out of fear, my parents started a communal church at home. It’s not a sin nor a crime or against national security to gather at a home and pray.”

All Farsi-speaking Christian churches in Iran are currently banned. Only non-ethnic-Persians, such as Armenians and Assyrians, are allowed to practice their Christian faith.

The four defendants were arrested on separate occasions. Victor Bet Tamraz, Shamiram Isavi and Amin Afshar Naderi were among several people who were arrested during a Christmas gathering at the Bet Tamraz residence in Tehran on December 26, 2014. They were later released on bail.

Naderi was arrested again on August 26, 2016, along with Hadi Asgari, and a number of other Christian converts after agents raided a private picnic at a garden in Firoozkooh, about 90 miles east of Tehran.

“Given that the Appeals Court has upheld heavy prison sentences against Youcef Nadarkhani and four other Christians… we are very worried that the sentences against these four Christians will also be confirmed,” Mansour Borji, the advocacy director of Article 18, a London-based organization that defends Christians in Iran, told CHRI.

“We hope that the sentences will be struck down as a result of our campaign and the support of the international community and the cases against other Christians imprisoned for the same reasons will be reviewed as well,” he added.

Born to Muslim parents, Pastor Nadarkhani, 41, converted to Christianity at the age of 19. In 2009 he was arrested and sentenced to death for “apostasy” but in 2011 the Supreme Court acquitted him on the condition that he would repent. Nadarkhani refused to renounce his faith and was ultimately released in September 2012.

In June 2017, Nadarkhani was tried again for the charges of  “assembly and collusion against national security” for allegedly organizing home churches and preaching “Zionist Christianity” along with Christian converts Mohammad Reza (Yasser) Omidi, Mohammad Ali Mosibzadeh and Zaman (John) Fadaei, who were sentenced to 10 years in prison each by Judge Mashallah Ahmadzadeh of Branch 26 of the Revolutionary Court in Tehran.

“About a month and a half ago, the police raided their homes and took them to Evin Prison to serve the 10-year prison sentences that were upheld by Branch 36 of the Appeals Court in 2017,” Borji told CHRI.