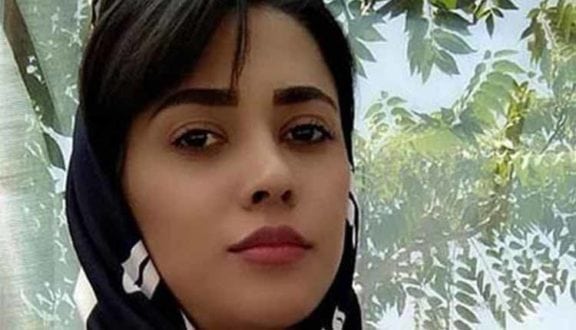 iran-hrm – Tabriz University Student Roya Saghiri was transferred to Tabriz Prison on August 25, 2018, to serve a 23-month prison sentence. She published the news of her conviction and imprisonment on her Instagram page.
The student Roya Saghiri was tried and sentenced to 23 months of imprisonment by the 2nd Branch of the Revolutionary Court of Tabriz in July 2018 and the verdict was upheld by the Appeals Court.
Saghiri, 24, along with seven other participants in the December 2017 protests, was arrested at Sa’at Square of Tabriz on December 31, 2017, and detained in the Women’s Ward of the Central Prison of Tabriz, capital of the northwestern Iranian Province of East Azerbaijan.
Roya Saghiri have been accused of “appearing in public without the religious Hijab (veil) by removing her scarf on the street.”
Several other students have already been sentenced to long prison terms for peacefully attending protests in Iran.
At least 19 students arrested for joining the December/January protests earlier this year are being sentenced to harsh prison terms, and their sentences are being upheld by Iran’s Appeals Courts.
The head of the women’s faction in the parliament, Parvaneh Salahshouri, recently admitted that the number of students being prosecuted for attending December 2017/January 2018 protests is much higher than earlier estimates. In an interview with the state-run ILNA news agency on July 10th, 2018, she said, “A list has been put together of the students detained in the December 2017 incidents and they number more than 150, so we’re not talking about just 55 or 90 students. Unfortunately, the issue of student detentions is much more extensive.” Salahshouri added, “The Intelligence Ministry is involved in some of the cases against these students and therefore the government and the ministry itself should explain what’s going on here.”