Where Is Your Kid? Iranians On Social Media Target Nepotism

RFL/RE – A newly launched social media campaign is pressuring Iranian officials to come clean about potential privileges their children enjoy due to their influence and connections.

The campaign, under the hashtag #Where_is_your_kid?, follows reports of the children of Iranian politicians being promoted to top state jobs despite a lack of experience and living “luxury” lifestyles at a time when many Iranians are struggling to make ends meet due to a plunging national currency and concerns over newly reimposed U.S. sanctions that are likely to make their lives even more difficult. 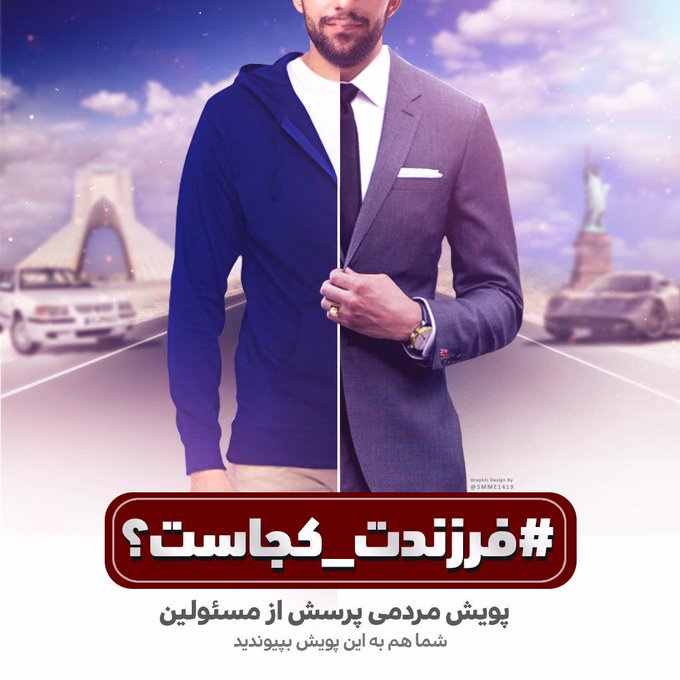 Taking a dig at officials whose children seem to be living in luxury either in #Iran or abroad, #Iranian hardliners have started a campaign called #فرزندت_کجاست (where is your child?) to challenge officials to provide details about their kids’ lives.

Earlier this month, protests broke out in around a dozen cities over economic woes, rising prices, and corruption in which protesters also chanted slogans against Iran’s leaders.

“Where is your kid is not about whether finding out if they are in Iran or in America, but it’s about whether your child is living like other classes of the society?” user Khalilolah Baluchi wrote on Twitter. “Are they reaping the fruit of their own effort or eating from our wealth?”

Many of the officials who reacted to the campaign denied that their children have state jobs, with some saying that their offspring are either unemployed or self-employed.

They include Iranian Foreign Minister Mohammad Javad Zarif, a graduate of Denver University who lived in New York for several years while serving as Iran’s ambassador to the United Nations.

Zarif was quoted by Iranian media as saying that his son and daughter both live in Tehran with their families.

“I thank God that following the conclusion of my mission at the UN, my children completed their studies and they’ve been back in Iran for more than six years,” Zarif said.

He said his son offers consulting in market management and that his daughter is an interior designer who spends most of her time taking care of her children while also doing occasional design work for family and friends.

Shahindokht Molaverdi, President Hassan Rohani’s special assistant for civil rights, said in a tweet that her two daughters are graduates of Iranian universities. One, Molaverdi wrote, does not have a permanent job and does translation work, she said, while the other is completing a professional jewelry making course.

The decision by some officials to respond to questions about their children publicly suggests Iran’s elite might be feeling some heat. Yet distrust remains, judging by some of the public reactions to the officials’ declarations.

“With the working conditions of the children of the country’s managers, I think we should stop the challenge of #Where_is_your_kid and launch a campaign to find jobs for the children of the officials,” journalist Haniyeh Efthekhari quipped on Twitter.

Officials have recently stepped up public efforts to combat financial crime, corruption, and profiteering by arresting 67 people — some of them subsequently released on bail — and setting up special revolutionary courts to try suspects accused of corruption.

A proposal by the Judiciary to set up the special corruption courts was approved over the weekend by Supreme Leader Ayatollah Ali Khamenei, who said punishments for those accused of economic corruption should be “carried out swiftly and justly.”