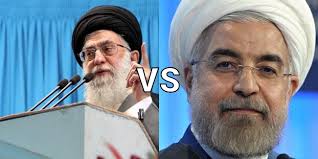 Radiofarda – Iran’s Supreme Leader Ayatollah Ali Khamenei has blamed the Islamic Republic’s ongoing economic crisis on the Rouhani administration, and has forbidden negotiating with the United States, during a speech in Tehran on Monday August 13.

In an unprecedented comment Khamenei said, “It was my mistake to allow negotiations with America,” to forge the nuclear deal with the West, the Iranian Labor News Agency (ILNA) quoted him as saying.

However, he added that the Iranian negotiating team “crossed the redlines” he had “set for negotiations” with the West.

Khamenei added, “the Imam [Ayatollah Rouhollah Khomeini] forbade negotiations with America, and I forbid it once again.”

Although he blamed the negotiating team, few believe that the nuclear talks lasting from 2013-2015 did not have Khamenei’s approval at every turn.

This was also an unprecedented comment as so far Khamenei attributed all problems including the economic crisis and the social unrest it caused to foreign countries. This can be seen as a U-turn as Khamenei was in denial of Iran’s economic crisis for several years.

Khamenei’s sudden turnaround on major issues might be a sign of certain nervousness at the top of the Iranian hierarchy as renewed U.S. sanctions and internal dissent create a desperate situation for the leadership.

Meanwhile he expressed concern that the serious devaluation of the national currency makes life harder for low-income employees.

Criticizing the mishandling of the foreign currency problem by the government, Khamenei said, “I am not saying this was an act of treason, but what happened marked serious mismanagement in policy-making and controlling the market.”

During recent days every US dollar was exchanged for over 105000 rials. The rate of exchange more than tripled in seven months in the Iranian markets.

Khamenei’s remarks on Monday are in line with other Iranian hardliners’ verbal attacks on Rouhani. Conservative officials and other hardline political figures have recently blamed Rouhani’s poor performance for the country’s economic problems and demanded major changes in his cabinet.

The pressures have so far led to the impeachment and dismissal of Rouhani’s labor minister, and the replacement of his Central Bank governor.

Although structural problems, mismanagement and widespread corruption played a major part in bringing the Iranian economy to the verge of collapse, Iran’s economic situation dramatically worsened after the United States withdrew from the nuclear deal with Iran in May.

In recent months, economic crisis coupled with political dissent brought thousands of Iranians to the streets of Tehran and other cities where they chanted slogans against Khamenei and Rouhani and questioned the Islamic Republic’s legitimacy.