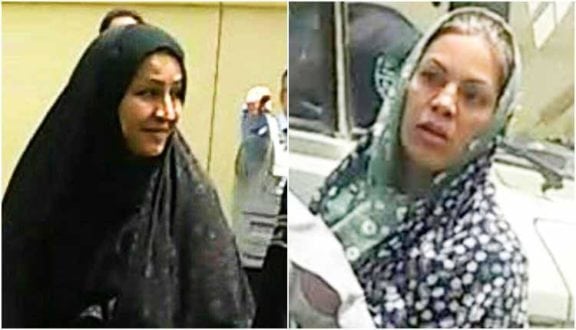 Iran-HRM – Two women from Iran’s Gonabadi Dervish religious minority, Elham Ahmadi and Sedigheh Safabakht, have been sentenced each to five years in jail by Tehran’s Revolutionary Court. They have been detained since 20 February following the violent dispersal of a protest held by Gonabadi Derivshes in Tehran.
In addition, the court imposed a two-year ban on Elham Ahmadi preventing her from engaging in social activities and from leaving the country. Sedigheh Safabakht was also deprived for two years of activities with or membership in political parties or social groups, as well as activity in the social media.
On 19 February, security forces violently arrested at least 60 women from Iran’s persecuted Gonabadi Dervish community for participating in a protest in Tehran which turned violent after security forces resorted to beatings, firearm use, water cannons and tear gas to disperse the crowd. The women were taken to Vozara detention center where they said they were subjected to intrusive body searches by female officers, intimidating interrogations, insults and yelling. In the following 24 hours, the authorities transferred 10 of the women to the quarantine section
of Shahr-e Rey prison near Tehran and released the rest. Those transferred are Shokoufeh Yadollahi, Sepideh Moradi, Maryam Farisani, Nazila Nouri, Sima Entesari, Shima Entesari, Shahnaz Kiani, Maryam Barakouhi, Elham Ahmadi, and Avisha Jalaledin. After several days, an 11th woman, Sedigheh Safabakht, who was apparently held in Evin prison before, was also transferred to Shahr-e Rey prison. There are reports that some women are undergoing late-night interrogations involving verbal abuse and threats.
Shokoufeh Yadollahi, another Sufi woman in detention, refused to appear in court on July 16, 2018, in protest to being deprived of having access to a lawyer and the court’s failure to observe the legal process of prosecution in her case.
Another incarcerated Sufi woman, Sepideh Moradi, has been pressured to withdraw the complaint has filed against prison guards, Sepideh’s mother, Sedigheh Khalili, said on July 16, 2018.
The Sufi women were badly brutalized by prison guards on June 13, 2018.