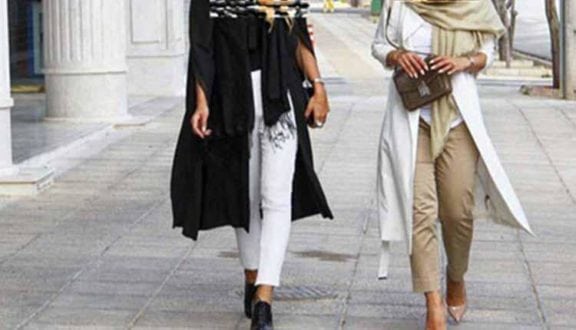 Iran-HRM – The head of the Clothing and Apparel Trade Union, announced that the production and sale of front open mantos in Iran has been banned.

According to Abu al-Qasim Shirazi, in Tehran every day 30 patrols of three will be supervising the clothing production and supply departments, reported the state-run ISNA news agency reported on July 11, 2018.

In the website of the Garment Producers and Dealers Union, a catalog of 200 stores selling totally Islamic clothing has been published.

In a message on 12th of July, which coincides with the day of the veil (Hijab) in Iran, the police force announced that there will show no merci for those who violate the law of veil (Hijab). The official statement of the police said that the Islamic Republic’s law enforcement force commemorates the 12th of July, the day of chastity and hijab. He declared that in practice, the inherent duties of the law are increasing and will show no merci for those who violate or break the standard laws, according to the state-run Fars news agency.

According to the regime’s dress code, women must cover their hair and wear long, loose garments, although it has slowly eased in recent years.

Iran’s morality police typically detain violators and escort them to a police van.

A high-ranking clerical regime’s scholar had recently declared, “Dealing with those who oppose the Hijab (veil) must be different from others.”

In a meeting on Saturday, March 24, 2018, with the State Security Force Commander, Hossein Ashtari, Nasser Makarem Shirazi pointed out that Hijab is not a secondary Islamic decree but has turned into a sign of Islam.

Makarem Shirazi added, “Dealing with this issue if undermined will deal a blow to the Islamic nature of the regime and undercut the Islamic aspect of the Islamic Republic; then the country will turn into a republic without Islam.”

To solve the regime’s predicament in dealing with the opponents of the compulsory veil, he said, “Negative debates over the compulsory nature of Hijab must be replaced by legal obligation.”

He reiterated, “Every law brings about an obligation. Hijab is also an Islamic law emphasized in various verses (of the Quran). This law and obligation must be observed and overlooking it would have consequences similar to the breaching of any other law.”