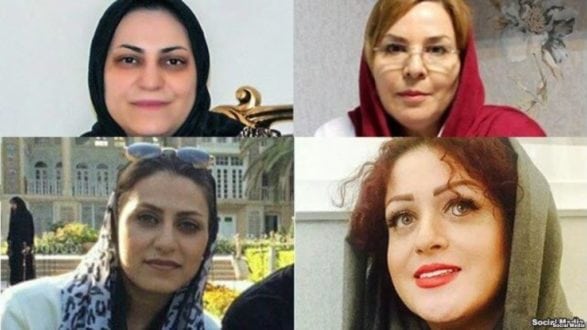 Four followers of Iran’s persecuted Sufi Gonabadi Order have been sentenced to five years in prison each after being arrested at a protest in Tehran in February 2018. Dr. Nazila Nouri, Avisha Jalaleddin, Shima Entesari and Sima Entesari were found guilty of “assembly and collusion against national security” by Branch 26 of the Revolutionary Court in Tehran in early July 2018.

The news was reported via a tweet by Sufi former lawyer Mostafa Daneshjou‏ on July 3.

Between February 19-20, 2018, violent clashes took place outside a police station in the Golestan St. neighborhood of Tehran, leaving one Sufi and three policemen dead. Some 170 dervishes were also hospitalized.

The policemen died after being run over by a bus on February 19 allegedly driven by Sufi faith member Mohammad Salas, who was executed on June 18 despite stating he was forced to confess and appeals for a retrial by rights organizations.

Iran’s Gonabadi dervishes believe in a different interpretation of Islam than that of Iran’s ruling Muslim Shia establishment. The Islamic Republic views any alternative belief system, especially those seeking converts, as a threat to the prevailing Shia establishment and has imprisoned members of the Sufi order as part of an ongoing persecution campaign.

Meanwhile a group of Iranian political personalities has written an open letter, a copy of which was received by the Center for Human Rights in Iran (CHRI), urging more than a dozen detained dervishes to end their hunger strike and for Iran to free them.

“While supporting your just demands… we urge you to end your hunger strike and call upon the authorities to intervene effectively and mercifully to resolve the issues and free the prisoners in consideration of the current dangerous conditions in society and the region, as well as the climate of public discontent.”

CHRI has learned that 10 men and an unknown number of women dervishes have been refusing food for weeks to protest their detention and the denial of due process in their cases.

The men are among an estimated 300 Sufis currently detained at the Great Tehran Penitentiary (GTP) and the women are detained in Gharchak Prison in the city of Varamin, south of Tehran.

The detained dervishes are currently being tried in groups by Branch 15 of the Revolutionary Court presided Judge Abolqasem Salavati and Branch 26 presided by Judge Mashallah Ahmadzadeh. Both judges are notorious for issuing harsh sentences in political cases.

“So far, verdicts have been issued against 60 of them,” Niloufar Dowlatshah, the wife of hunger striker Mohsen Azizi, told CHRI on June 11. “The sentences include multiple years in prison, flogging, travel bans and exile.”

“All the dervishes have been charged with ‘disturbing public order’ and ‘assembly and collusion against national security,’” she added. “Some of them have also been charged with carrying different kinds of weapons.”