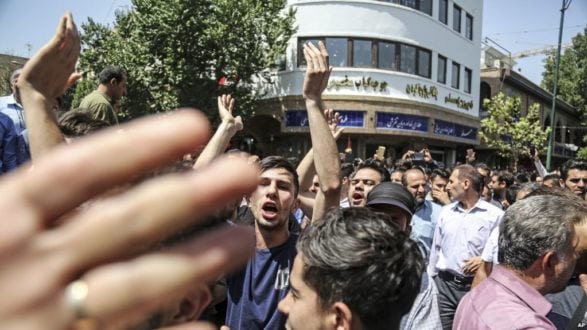 Reuters – Mounting pressure from the Trump administration combined with discontent among many Iranians at the state of the economy are rattling the Islamic Republic, with little sign that its leaders have the answers, officials and analysts say.

The disturbances are a major challenge, but analysts expect the leadership will survive despite factional infighting and growing economic problems.

However, the weekend protests quickly acquired a political edge, with people shouting slogans against Iran’s ultimate authority, Supreme leader Ayatollah Ali Khamenei, and other top officials, calling them thieves who should step down.

Bazaar merchants, mostly loyal to the leadership since the 1979 Islamic Revolution, are angry at what they see as the government’s muddled response to the crisis, which they said had sent prices soaring and made trading almost impossible.

The rial has lost 40 per cent of its value since last month, when President Donald Trump pulled out of Iran’s 2015 nuclear accord and announced draconian sanctions on Tehran.

These include an attempt to shut down the international sale of Iranian oil, Tehran’s main source of revenue, a threat that has cast a chill over the economy.

“The country is under pressure from inside and outside. But it seems there is no crisis management plan to control the situation,” said an official close to Khamenei’s camp.

The full impact of Trump’s withdrawal from the nuclear deal and Washington’s move to stop foreign countries from doing business with Iran, may not be clear for months.

European signatories are hoping to salvage the deal – under which most sanctions were lifted and Iran curbed its nuclear program – but there are doubts they can keep it alive.

Already French companies Total and Peugeot, for example, have said they will pull out of Iran rather than risk being shut out of the U.S. financial system, as Washington threatens to use the dollar’s reserve currency status to punish anyone who gets in the way of its ramped-up Iran policy.

Iran has blamed U.S. sanctions for the fall in the rial, saying the measures amount to a “political, psychological and economic” war on Tehran – although some officials recognize that the threat has exposed serious failings at home.

“Sanctions cannot be blamed for all the internal problems. They have yet to be implemented,” said a second official, familiar with Iran’s decision-making process.

To pile on the pain, Washington says all countries must end crude imports from Iran by Nov. 4, hitting the oil sales that generate 60 percent of the country’s income. Iran says this level of cuts will never happen.

“DEATH TO THE DICTATOR”

Tehran’s Grand bazaar is traditionally the biggest financial ally of the establishment, and it helped bankroll the 1979 Revolution.

But while cries of “Death to the Dictator” resembled chants of “Death to the Shah” four decades ago in the bazaar, analysts and insiders ruled out any chance that Iran is once more on the brink of a seismic shift in its political landscape.

“With severe economic pressure ahead of us, the protests will not die easily,” said an Iranian diplomat in Europe. “But the chance of a regime change is zero because Iranians do not want another revolution and are skeptical it would be for the better.”

Police and security forces maintained a heavy presence in the area after days of clashes with protesters. Though officials say the bazaar has resumed normal business, the rial crisis and its political reverberations are surely far from over.

While pragmatist President Hassan Rouhani’s government has tried to stop the currency slide with a combination of threats and persuasion, many Iranians remain unconvinced.

“The rial’s fall is disrupting my business. The cost of imports has skyrocketed. If it continues, I will not be able to continue my business,” said Reza, a shopkeeper in the bazaar who refused to give his full name.

Despite calls for unity by Khamenei, divisions have emerged among Iran’s ruling elite, with some hardliners calling for a snap presidential election, and criticizing Rouhani for economic mismanagement.

Factional power struggles are endemic in Iran, where hardliners around the Supreme Leader, such as the Revolutionary Guards and the judiciary, face off against the president, and pragmatists and reformists in elected institutions such as parliament.

“Both sides will try to use the combination of external and internal pressure to advance their causes,” said Sanam Vakil, an adjunct professor teaching Middle East politics at SAIS Europe.

“If the government fails to find an immediate solution to the crisis … a snap presidential election will be inevitable in the coming months,” said Tehran-based analyst Saeed Leylaz.

Some analysts see an outside chance that Iran’s hardline leaders might seek an accommodation with the United States, with the prospect of sanctions bringing Iran’s economy to its knees.

But Trump may be in no hurry to embark on negotiations that might bolster Iranian clerical leaders.

The leadership “might lean toward a compromise with America to preserve the establishment”, said one official involved in Iran’s nuclear talks with foreign powers. “But of course America should show flexibility as well.”

While more pragmatic elements in Iran have indicated an interest in dialogue with America and a diplomatic solution to the standoff, Khamenei has resisted direct negotiations, partly because of internal power politics.

“Despite their radical public approach, hardliners want a compromise with America, but they don’t want to give Rouhani the upper hand at home by championing talks,” said a source, familiar with Iranian thinking.