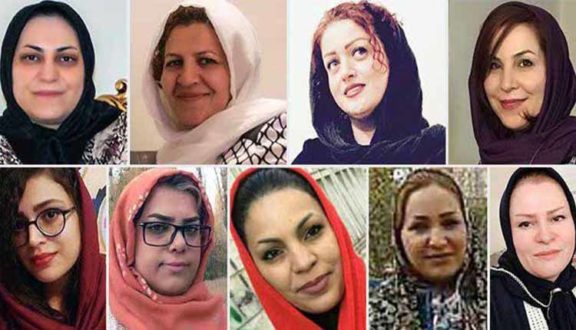 The prison authorities have incited the prisoners of public crimes against the Dervish women by threating them to silent, and have created areas of tension and conflict between them.

They were also brutally beaten and attacked by the prison’s Special Forces with batons and electric shockers. The prison officers then detained each of the women in a separate solitary confinement. Till now, their family members have gathered in front of the prison but, they are not allowed to contact or visit none of the prisoners. It has been reported that some of them are in severe condition.

Eleven Yaresan women were transferred to Qarchak Prison on February 20, 2018, after the bloody crackdown of the peaceful demonstration and gathering of Gonabadi Dervishes in Tehran. Although the arrested women had been badly injured and needed urgent medical care, the prison’s medical staff refused to provide them care.

Ms. Sepideh Moradi suffered injuries in the hand, elbow and fingers while being arrested during the Yaresan protest in Tehran. Her legs got burnt due to security forces’ use of tear gas, the scars of which still remain after three months. Ms. Moradi has been denied medical care.

Ms. Shokoufeh Yadollahi was badly brutalized during arrest and subsequently under torture as a result of which she has lost her sense of smell and needs to be treated urgently.

Ms. Shahnaz Kian Asl (Kiani) was transferred to the dispensary of Qarchak Prison of Varamin on Saturday, May 19, 2018, upon insistence of inmates, but was returned to the ward without receiving medical care. She had been offended and humiliated in the clinic by the doctor and nurse.

IranWire Documentary: The Iran-Linked Assassinations of Arab Activists and Journalists