Al-Arabia: The US has started confronting IRGC’ Quds Brigade

Political analyst Dr. Karim Abdian Bani Saeed, the consultant of the Democratic Solidarity Party of Ahwaz, told Al Arabiya.net that American troops in the region has started confronting the activity and deployment of the Iranian Revolutionary Guards’ Quds Brigade in the region’s countries via military, logistical and intelligence aid to powers that oppose Tehran.
By Saleh HamidAl

Bani Saeed, who resides in Washington, also said that the 12 conditions detailed by US Secretary of State Mike Pompeo on the Iranian nuclear deal are a comprehensive strategy to respond to Iranian interferences in the region and which threaten the interests and security of the US and its allies.

Bani Saeed, who is the head of the foreign relations’ committee at the Congress of Nationalities for a Federal Iran and the director of Ahwaz Human Rights Organization (AHRO), also said that America’s new strategy serves the ongoing protests in Iran because the strict sanctions will weaken the regime’s capabilities to suppress protests.

“America’s new strategy also deals with Iran’s lack of transparency regarding the project to design a nuclear bomb. The US knows all of the details of this project which is why Iran has not allowed the International Atomic Energy Agency to visit sensitive military and nuclear sites.

This strategy also deals with other issues such as the release of Americans detained in Iran, ending the presence of Iran’s troops in Iraq and preventing Iran from continuing to provide aid to terrorist organizations,” he said. 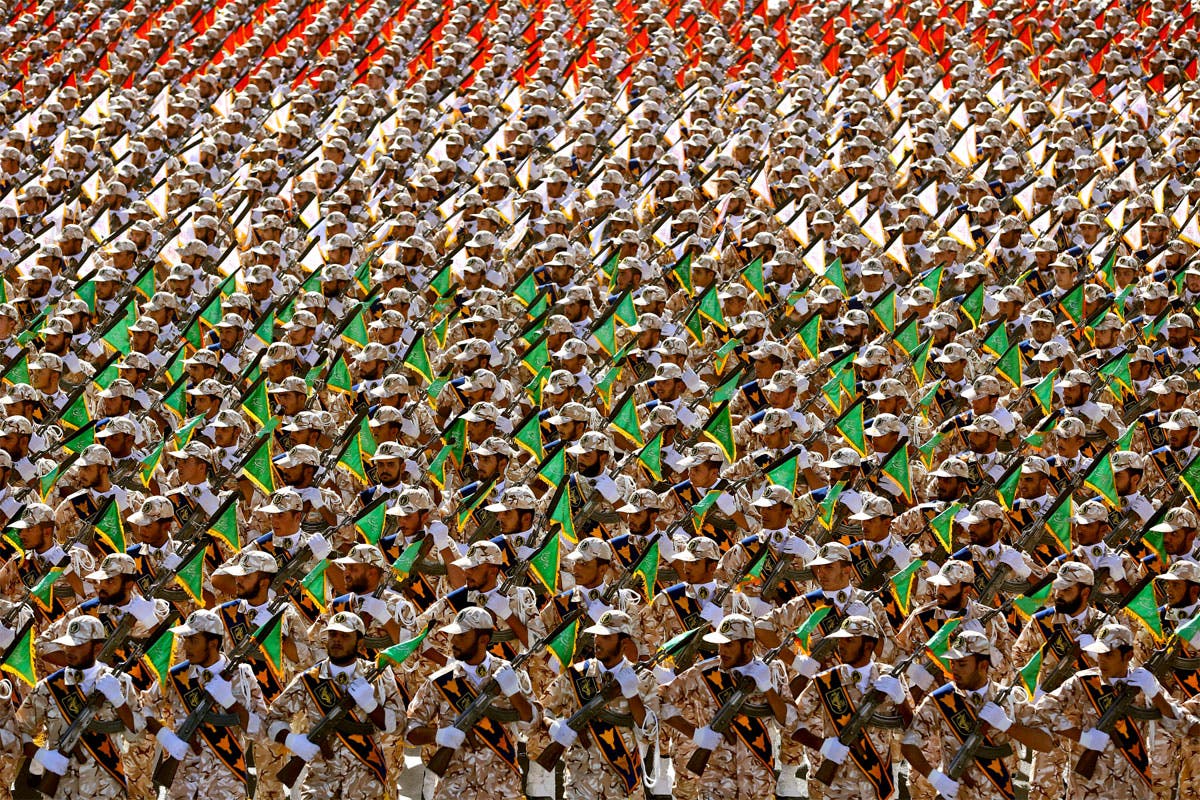 With the Iranian administration severely weakened, it could find itself facing another revolution, which would cause the IRGC to step in. (File photo: AP)

Commenting on whether the new sanctions on the Revolutionary Guards and the Iranian regime institutions will affect the protests in country, Bani Saeed said: “For a country like Iran, whose the majority of its revenues comes from oil, the sanctions will weaken the regime’s oppressive capabilities. This is because the state utilizes its resources to suppress popular protests and gives oil revenues to the Revolutionary Guards and its militias to buy equipment and weapons.”

He added that Iran “will not be able to resume” its interferences in the region’s countries, especially in Syria, Yemen and Iraq, without oil revenues as it uses the latter to pay the wages of thousands of Iranian forces, mercenaries and Shiite militias.

“This new American strategy will allow the region’s countries, especially those who import American weapons, to confront Iran because the sanctions will include military, logistical and intelligence aid to these countries against Iran and its activity in the region. This will be useful, and this means that the US troop’s confrontation of the Revolutionary Guards’ Quds Brigade that is responsible for Iran’s military interferences in these countries has already begun,” Bani Saeed said.

Regarding the ongoing protests in Iran, Bani Saeed said the Iranian people want the international community to know that reformists and hardliners are “two sides of the same coin,” as they’re the same in terms of persecution, discrimination and corruption.

“Although no one knows when and how the regime will fall, the Iranian people are more optimistic that it will fall after the recent protests which are being held amid economic and political deterioration and increased international support,” he said.

Bani Saeed also said that changing the regime must happen from within, adding: “If protests resume in Iran, unite across the country and raise slogans of democratic change and respecting freedoms, minorities’ rights and all religions and Iranians ethnicities while avoiding violence, they will certainly gain international support and reach the stage of civil disobedience which will definitely exhaust and topple the regime.”