RFL/RE – Celebrated Iranian actor and director Nasser Malek Motiee was under a media ban for nearly 40 years, and it wasn’t lifted until he was 6 feet under.

But after he died on May 26 at the age of 88, the man known as the “King of Iranian cinema” finally found himself back in the spotlight.

Malek Motiee’s funeral in Tehran the next day drew thousands of fans — some taking the opportunity to chant antigovernment slogans, prompting a heavy-handed police response — and dominated the front pages of many Iranian newspapers.

Malek Motiee starred in and directed dozens of films prior to the Islamic Revolution in 1979. Afterward, the state broadcaster, the Islamic Republic of Iran Broadcasting (IRIB), and the ruling establishment imposed a media ban on prerevolutionary celebrities.

With few exceptions, Malek Motiee was also barred from acting and directing any films in Iran due to strict restrictions placed on the movie industry after the revolution.

“The End Of The Media Ban,” the reformist Aftab-e Yazd newspaper wrote in a May 27 editorial that highlighted the irony of state media’s coverage of Malek Motiee’s death.

“The news of his death was announced by state TV, though his presence on TV was restricted before that,” the daily added.

“Farewell To The Great King Of Iranian Cinema,” a headline in the financial daily Donya-ye Eqtesad read.

The front page of the reformist Hamdeli daily was dominated by a photo of the late actor’s body being laid to rest. In another reference to Malek Motiee being ostracized by the government, the headline read: “Naser! The People Came.”

The hard-line daily Kayhan was an exception: Malek Motiee did not make the front page, which was dominated by a photo of mourners having iftar — the fast-breaking dinner gatherings during Ramadan — at a cemetery for martyrs in Tehran.

‘Our Disgrace, Our State Broadcaster’

Videos posted on social media purported to show police using tear gas to disperse the mourners who were protesting. RFE/RL could not verify the authenticity of the videos.

Human Rights In Iran, a Canada-based nongovernmental organization, uploaded a video to Twitter on May 27 that purported to show people covering their mouths with their hands and coughing. The caption reads: “Police used tear gas against people during the funeral of Naser Malek Motiee. A number of people were arrested by police.” 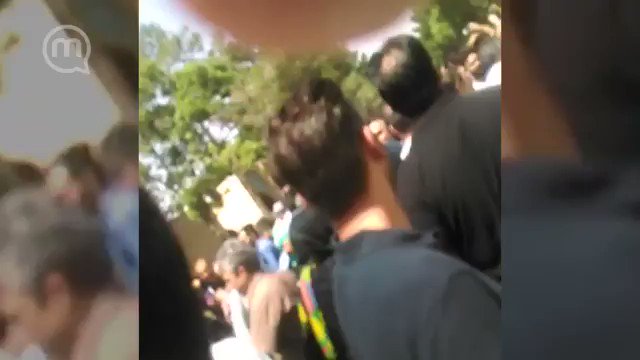 Earlier on May 27, a spokesman for Iran’s powerful Judiciary warned that Iranian security forces would “resolutely confront” unrest that could be exploited by the United States and other enemies.

“I urge families not to let their children be fooled by psychological warfare…launched by the enemy, especially Zionists (Israel) and Americans, and not let counterrevolutionaries infiltrate crowds of protesters who have legitimate demands,” said Gholamhossein Mohseni Ejei, the Judiciary’s news website, Mizanonline, reported.

Addressing the state broadcaster during the funeral ceremony, Malek Motiee’s son condemned the media ban on his father.

In a widely viewed video uploaded on May 27, he asks: “Why are my father’s photos shown on news channels now? Why are photos of an actor only allowed after his death?” 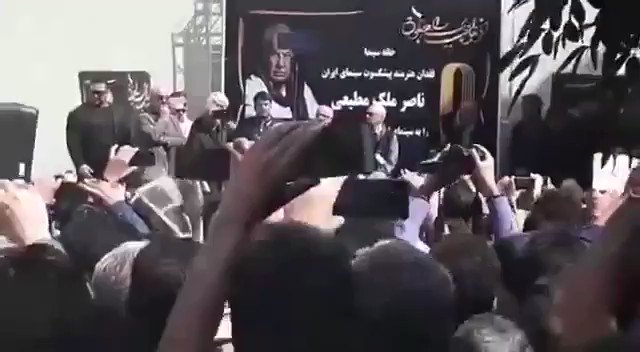 “For 40 years, we couldn’t say his name,” he said to applause. “We feared it. But we shouldn’t have feared it. He never committed a crime.”