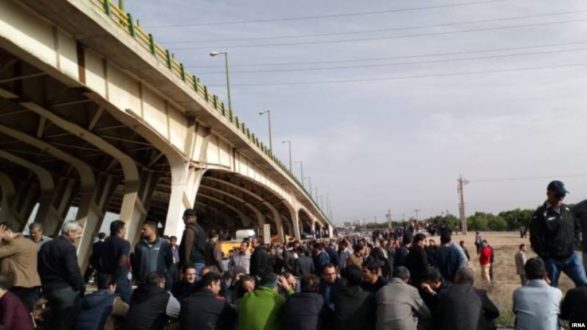 Radiofarda – As their strike entered its fourth day May 16, workers at the Hepco industrial complex in the central Iranian city of Arak removed the barricades they had used to block the country’s main north-south railway line and set a five-day deadline for authorities to respond to their demands.

The workers had blocked the rail lines May 14 to protest their work conditions and demand the four months’ back pay they say they are owed by the owners of the complex, state-run Iran Students News Agency (ISNA) reported.

The protesters are also unhappy with the performance of the management of the industrial complex, which was privatized [WHEN?]

The workers have repeatedly called upon the government to return Hepco’s ownership to the public sector. Workers at many other privatized factories across the country have also joined workers in Arak, insisting that their work conditions have also worsened after the privatization of their companies.

Employees at Iran’s large industrial complexes often complain that wages are paid late, pensioners’ rights are neglected, and that thousands of workers have been fired.

According to Iran’s Free Trade Union, “8,000 workers used to work at the Hepco industrial complex before its privatization. Now, only 1,000 of them are left.” [where was this stated?]

If our demands are not met, the protesters have warned, “We will return and disrupt the North-South railway again,” ISNA quoted one of the workers as saying.

Earlier, the Central province Deputy Governor for Political and Security Affairs, Fat’hollah Haqiqi, had cautioned that actions like disrupting the railways are “against the country’s interests, and much effort has been put into addressing the protesters’ demands and achieving their rights.”

Warning that protests and strikes may be exploited by “anti-Islamic Revolution forces,” Haqiqi said protesters “serve the enemy.”

“One of the major activities of our enemies has been to create a recession and obstacles in our factories and among our groups of laborers — particularly the big ones — so they can provoke the workers,” Khamenei said in one of his shortest speeches ever, addressing the Congress Of 14,000 Martyred Laborers February 5.

The “enemy,” as a rule, is a word used by Iranian authorities to describe the United States or Israel.

Meanwhile, Khamenei’s representative in the Central province, mid-ranking cleric and former Intelligence Minister Qorban Ali Dorri Najafabadi, has suggested that the government is set to privatize the province’s power station, petrochemical facilities, and refinery in a way that provides tools for anti-Islamic Revolution movements and foreign media to attack the ruling establishment with a barrage of criticism.

Privatization of key industries has been historically championed by Iran’s reformists and criticized by conservatives.

Workers protests have gained momentum in recent days across the country. Workers at the Iran National Steel Industrial Groups (INSIG) in the southwestern city of Ahvaz rallied in front of the governor’s office. [When?]

INSIG, based on a steel mill founded in 1963 during Shah Mohammad Reza Pahlavi’s reign, was privatized in 2016, leading to repeated demonstrations by workers protesting “unacceptable” work conditions under the new management.

The discontented workers of INSIG started a new round of strikes nine days ago. On the eighth day of the strike, protesters chanted slogans to relay their dissatisfaction, including, “Today is the day of mourning, labor is hosting a funeral,” “No nation has ever seen such injustice,” as well as sarcastically shouting, “Down with Labor. Hail to the Tyrant.”

The industrial group has nearly 4,000 employees who have not been paid for at least three months.

The owner of INSIG, Iranian tycoon Abdol Reza Mousavi, has accused his employees of being “provoked by malicious elements” outside the industrial complex.

Scores of industrial groups and factories across Iran are currently experiencing strikes and protest rallies.