After moves on North Korea, Pompeo to press allies on Iran

Al-Arabia – Having returned from North Korea on Thursday, Secretary of State Mike Pompeo will begin talks in coming days to persuade allies in Europe, the Middle East and Asia to press Iran to return to negotiations over its nuclear and missile programs, US officials said.

The open question is whether the allies, and above all Iran, will agree to resume full-fledged talks, having just seen the United States withdraw from the 2015 Iran nuclear deal and renege on its promises under the landmark arms control accord.

The US hope is that Iran will be dragged to the table by the resumption of US sanctions – and possibly the imposition of more – which would penalize European and other companies and likely cripple Iran’s oil-driven economy. A senior State Department official said discussions with Britain, France and Germany, as well as Japan, Iraq and Israel had already taken place since US President Donald Trump on Tuesday pulled out of the nuclear pact.

“There will be an effort to go out globally and talk to our partners around the world who share our interests. That is the first stage,” a senior State Department official said of plans for talks by Pompeo and his chief Iran negotiator, Brian Hook.

ALSO READ: Iran’s bid to further its hegemonic desires through a takeover of Algeria and Morocco

“The composition of what happens when we sit down with the Iranians is several stages out,” the official said, adding that talks would focus on how to raise pressure on Iran “in a way that is constructive and conducive to bringing them to the negotiating table.”

Trump’s decision opens the door to greater US confrontation with Tehran and strains relations with America’s closest allies. Washington has given grace periods of 90 days to six months for companies and countries to wind down their trade with Iran, including reducing purchases of Iranian oil.

Even though companies can seek US Treasury licenses to continue operating in Iran beyond the deadlines, the threat of US sanctions will likely force them out, experts say. Iran’s Oil Minister Bijan Zanganeh said Washington’s decision to pull out of the deal would not affect Tehran’s oil export.

Pompeo returned to the United States overnight after meeting with North Korean leader Kim Jong Un and helping to return three Americans who had been imprisoned there. The families of Americans jailed in Iran have also appealed to Pompeo to help secure their release. 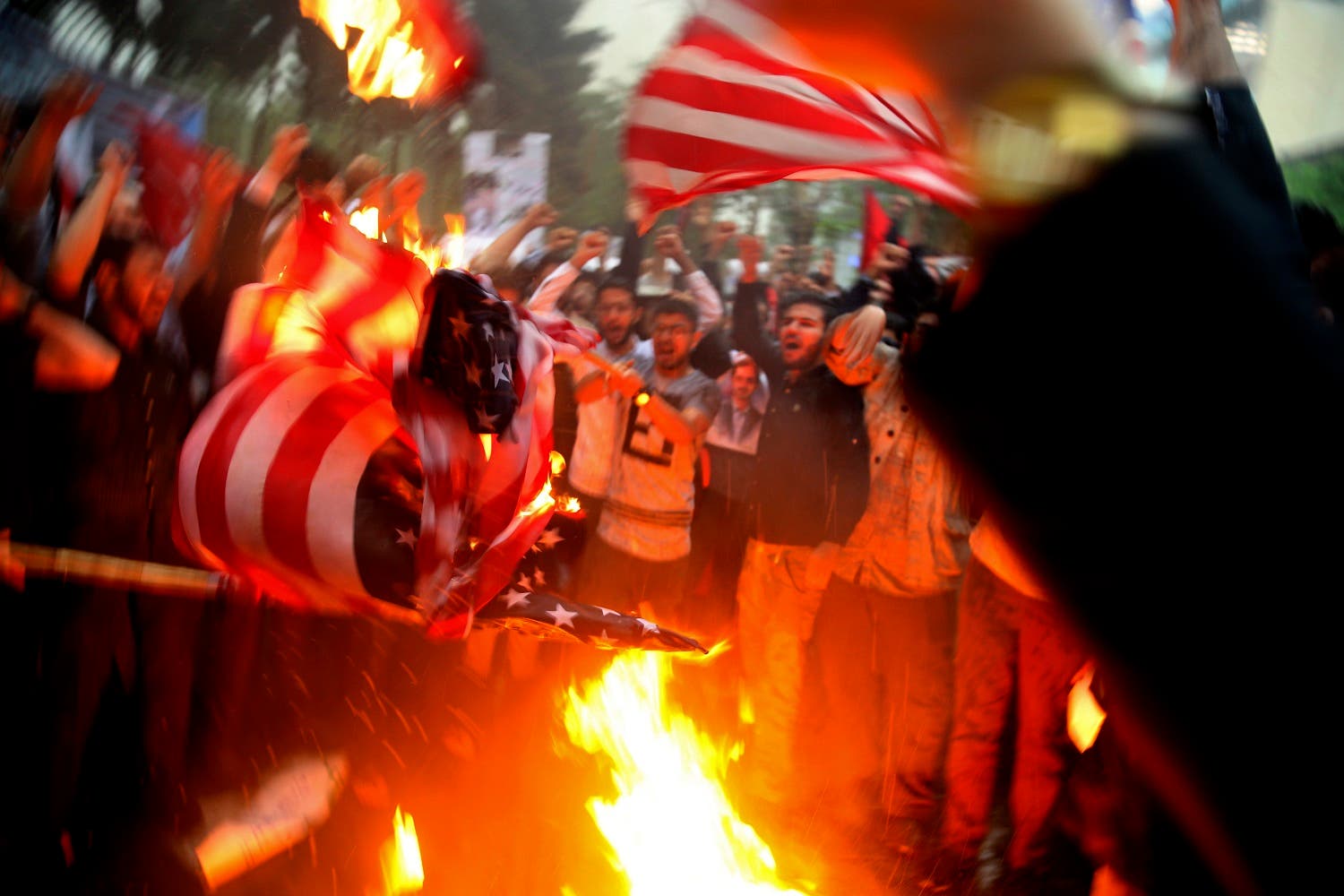 Iranian demonstrators burn representations of the US flag in front of the former US Embassy in Tehran on May 9, 2018. (AP)

Companies will also have to assess whether they could face revived secondary sanctions, which would target sectors of the Iranian economy including energy, petrochemicals, shipping, financial and banking, experts say.

“The goal is ultimately to reach a point where we sit down with the Iranians and negotiate a new deal, but I don’t think we’re at that point today, or will be tomorrow,” the State Department official said. “The ultimate goal is to lay the groundwork for getting everyone back to the table and negotiating a new deal.”

Several US officials have acknowledged there is no “Plan B” if Washington cannot win the support of allies – and Iran – to negotiate a new, expanded agreement that would end Iran’s nuclear program, restrain its ballistic missile program, and curb its support for groups in Syria, Lebanon, Yemen and Iraq.

“The goal is to prevent Iran from ever developing or acquiring a nuclear weapon and the detail beyond that is something we are going to have to flesh out,” the official added. Andrew Peek, deputy US assistant secretary for the bureau of Near Eastern Affairs at the State Department, denied the pressure campaign aimed to force regime change in Iran.

“No, we are trying to change the regime’s behavior,” he told reporters on a conference call, adding that Washington would use diplomacy to convince allies to follow the US sanctions lead. Peek acknowledged there are some “diplomatically tactical disagreements” with Europeans but said those differences could be overcome. “This is something where we cajole, we urge, we prod, which have proven effective,” he added.

While the parties were unable to agree on a supplemental pact to the 2015 nuclear deal, the senior official said a new round of talks would “pick up all of the work” done so far.