VOA – Dozens of steel workers in northern Iran have staged a public protest outside government buildings to call for pressure on their employer to hand over several months’ worth of unpaid wages.

Iranian state-run news agency ILNA said about 100 workers of the Qazvin Steel Company rallied on Wednesday outside the provincial governor’s office in Qazvin, before moving on to a judiciary building.

ILNA said the demonstrators, representing about half of the company’s workforce, raised several complaints, including months of nonpayment of salaries and premiums for working in hazardous conditions, and years of nonpayment of corporate contributions for health insurance. The workers also demanded job security. 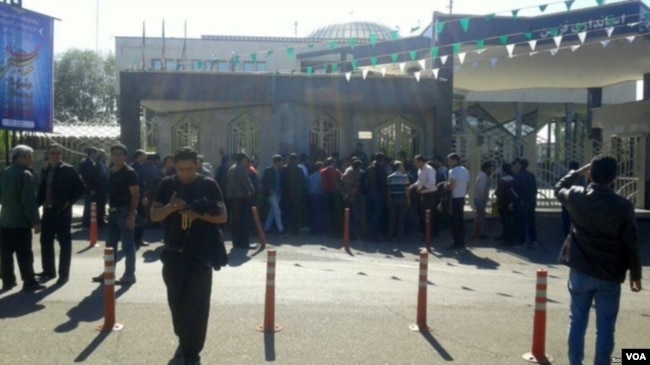 Steel workers angered by nonpayment of wages protest outside a government building in Qazvin, Iran on April 25, 2018. (social media/VOA)
The report said Iranian judicial authorities had ordered a transfer of the Qazvin steel plant’s ownership six months ago to a private company named Rahe Abrisham, or Silk Road. It quoted workers as saying conditions at the plant have become worse since then.

Iran has seen a wave of public protests in recent months by Iranians with various grievances, not just against employers but also against local and national leaders who they accuse of mismanagement, corruption and suppressing freedoms.

Michael covers international news for VOA on the web, radio and TV, specializing in the Middle East and East Asia Pacific. Follow him on Twitter @Michael_Lipin