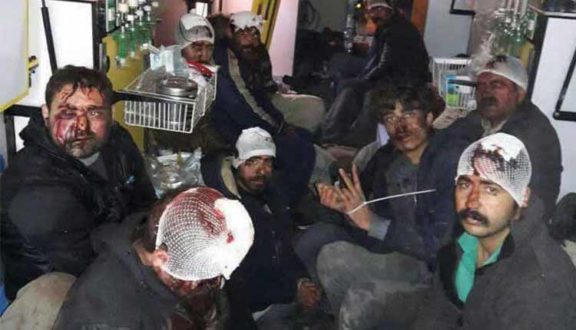 Radiofarda – Nearly ninety civil rights and political activists inside Iran have issued a statement raising concern over “unpleasant reports” concerning the health condition of the detained Gonabadi dervishes and their situation behind bars.

The statement published in several websites, including pro Green Movement Kalemeh.com, has called for a fair legal procedure concerning indictments filed against the detained Sufis.

Describing the news about “out of turn and urgent trial” of the detained dervishes as an unacceptable sign of unfairness, the signatories have called upon judiciary officials to respect Tehran’s commitments to local penal codes and international conventions.

The statement, published on Saturday, March 3, has also demanded the release of the detainees on bail to show the impartiality of the Islamic Republic’s judicial system.

Nevertheless, several judiciary officials have already declared that the detained dervishes will be tried urgently.

Furthermore, Tehran’s Police Chief, IRGC commander Hossein Rahimi has announced that the driver of a bus, who allegedly ran over three police officers and killed them in Pasdaran avenue, will be executed before the next Iranian new year (beginning March 21).

A gathering in front of Police Station 102 in north Tehran on February 19 triggered a protest move by members of the Gonabadi order of Iranian dervishes, after one of its members, Nematollah Riahi was arrested by the security police and detained at the precinct.

Riahi, 72, from the city of Shahr-e Kord near Isfahan, had come to Tehran to defend the house of the leader of the Gonabadi order against a probable attack by the police and plain-clothes vigilante groups.

Kasra Nouri, one of the dervishes taking part in the gathering told Radio Farda, “Some 100 policemen attacked the dervishes and shot at them. We are worried about our security in the area, while we are defending our leader, Dr. Nour Ali Tabandeh. Our resolve is to defend him up to the last drop of our blood.”

Tabandeh’s house is located in Tehran’s Passdaran Avenue, which was the site of clashes between the police and the dervishes twice before, in late December 2017 and early January.

The signatories to the recent statement, who are mainly pro-reformist activists as well as former and current political prisoners, have insisted that the detained dervishes who have been battered, need urgent medical treatment.

Images of dervishes with broken heads, jaws and teeth have been widely circulated in social media in recent days.

Furthermore, there have been reports about the death of three detained dervishes in hospitals. The death of at least one of the dervishes has been confirmed by judiciary’s spokesman.

However, in a statement attributed to 91-year old leader of the Gonabadi dervishes, Nour Ali Tabandeh, he has called upon his followers to stay calm, exercise self-restraint and avoid any violence.

Tabandeh, a France educated lawyer, was appointed as the Qutb (Pivot) of the Gonabadi dervishes replacing his father, Mahboob Ali Shah who died in 1996.

The Islamic Republic intensified its campaign against the Gonabadi dervishes in 2005 by arresting scores of them and demolishing their Hussainiyehs.

The Gonabadi dervishes belong to the Sufi order known as “Nematollahi Sultan Ali Shahi” that believes in the principles and teachings of the 12-Imamite Shi’i Islam.

Nevertheless, the Islamic Republic of Iran has been seriously suppressing the Sufi order for some of their other beliefs.

Dervishes are members of a Muslim (specifically Sufi) religious order who have taken vows of poverty and austerity. Dervishes first appeared in the 12th century; they were noted for their wild or ecstatic rituals and were known as dancing, whirling, or howling dervishes according to the practice of their order.