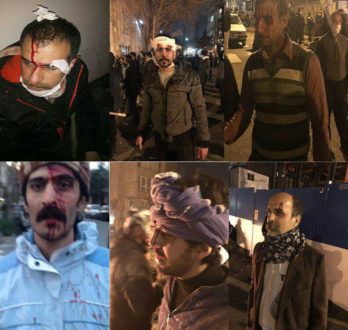 According to Shabtab News, the ruling regime in Iran, which has been seeking in recent months to dismantle the Sufis of the Nematollah Gonabadi order in Iran, has once again reinitiated its plan, which was previously defeated during its prior attempt, to destroy the Sufism in Iran.

Following the clashes and crises that began in mid-February of 2018 against the Gonabadi Sufis in the 7th Golestan area of Pasdaran Avenue in Tehran, this crisis has now entered into a very serious and dangerous phase, in which all members of Gonabadi Sufis are to be formally identified and eliminated throughout Iran by the Iranian regime.

The police and the judiciary arms of the regime which have detained the Sufis since 19th February, 2018, are not only torturing them at Evin, Fashafiyah, and Gharchak prisons, but also are freely persecuting, and intimidating, and on occasions torturing the Sufis across numerous streets and neighbourhoods of Tehran, right in front of the general public.

Multiple documents, including several pieces of videos published on social networks, provide solid evidence that the treatment of detained Sufis in the prisons is in clear violations of international conventions on the rights of detainees and prisoners.

These documents clearly demonstrate the grave violations of human rights and the citizens’ rights of the people of Iran by police officers and security forces and judicial authorities.

These documents clearly demonstrate the grave violation of human rights and the citizens’ rights of the people of Iran by police officers and security forces and judicial authorities.

Another shocking video clip, the remains of massive and brutal attacks on the Gonabadi Dervishes of February 19, 2018, and the invasion of residential houses in Golestan 7 street.

Sardar Rahimi, (Tehran’s Chief of police)  explicitly stated, on 22nd February, 2018, on national TV, the voice of the ruling system in Iran, That he had clearly considered the idea of using heavy-handed tactics such as the use RPG’s (Rapid Firing weapons) against the Sufi’s during the recent protests.

Sardar Bagheri, (the Chief of Staff of Iran’s Armed Forces) is another official who has publicly stated that he is willing to use very harsh and inhumane tactics against the Sufis. 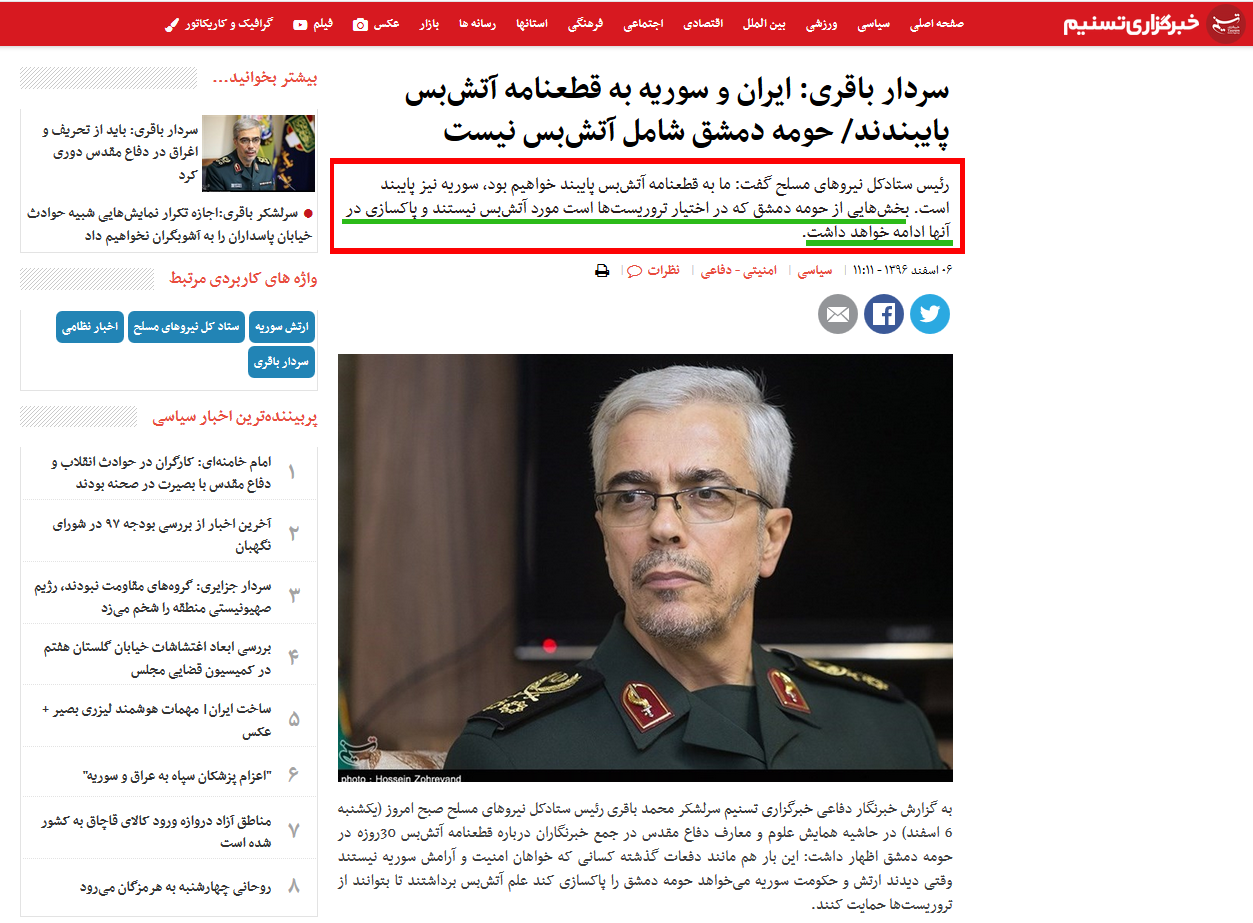 The Cleric Mr Ahmad Alam al-Hadi, on 23rd February 2018, in Mashhad, also stated that Sufis are a British sect that should be dismantled from Iran. 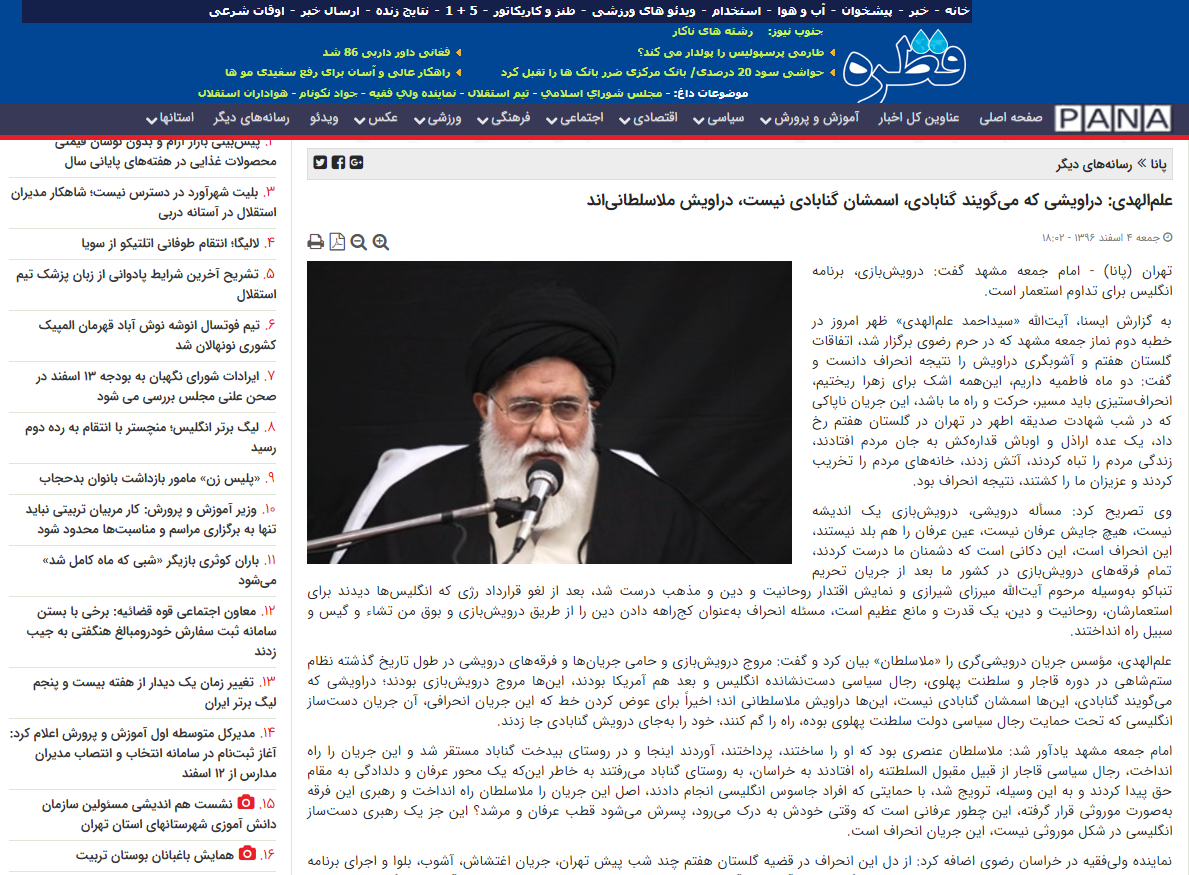 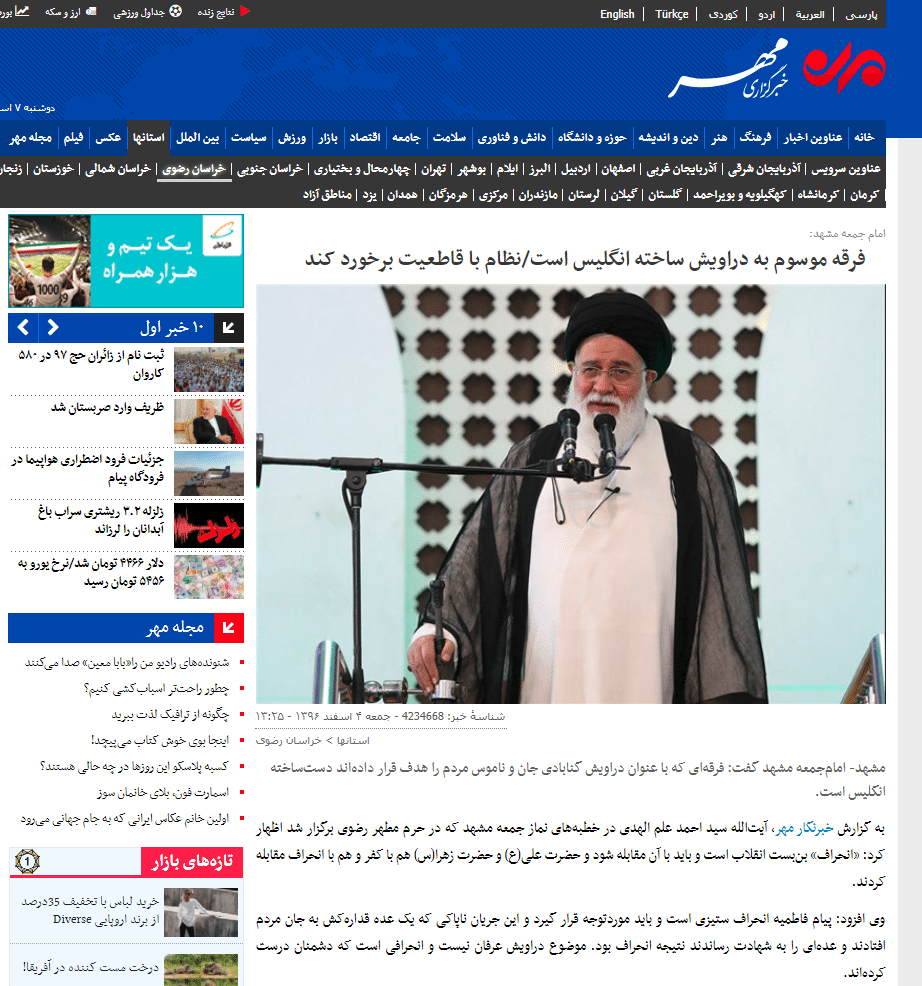 Conservative Ayatollahs Nouri Hamedani and Makarem Shirazi, who have great influence within the Iranian regime also on 24th February, demanded the regime to harden its stands against Sufis by dismantling Sufism in Iran and eradicate the Gonabadi order from Iran. 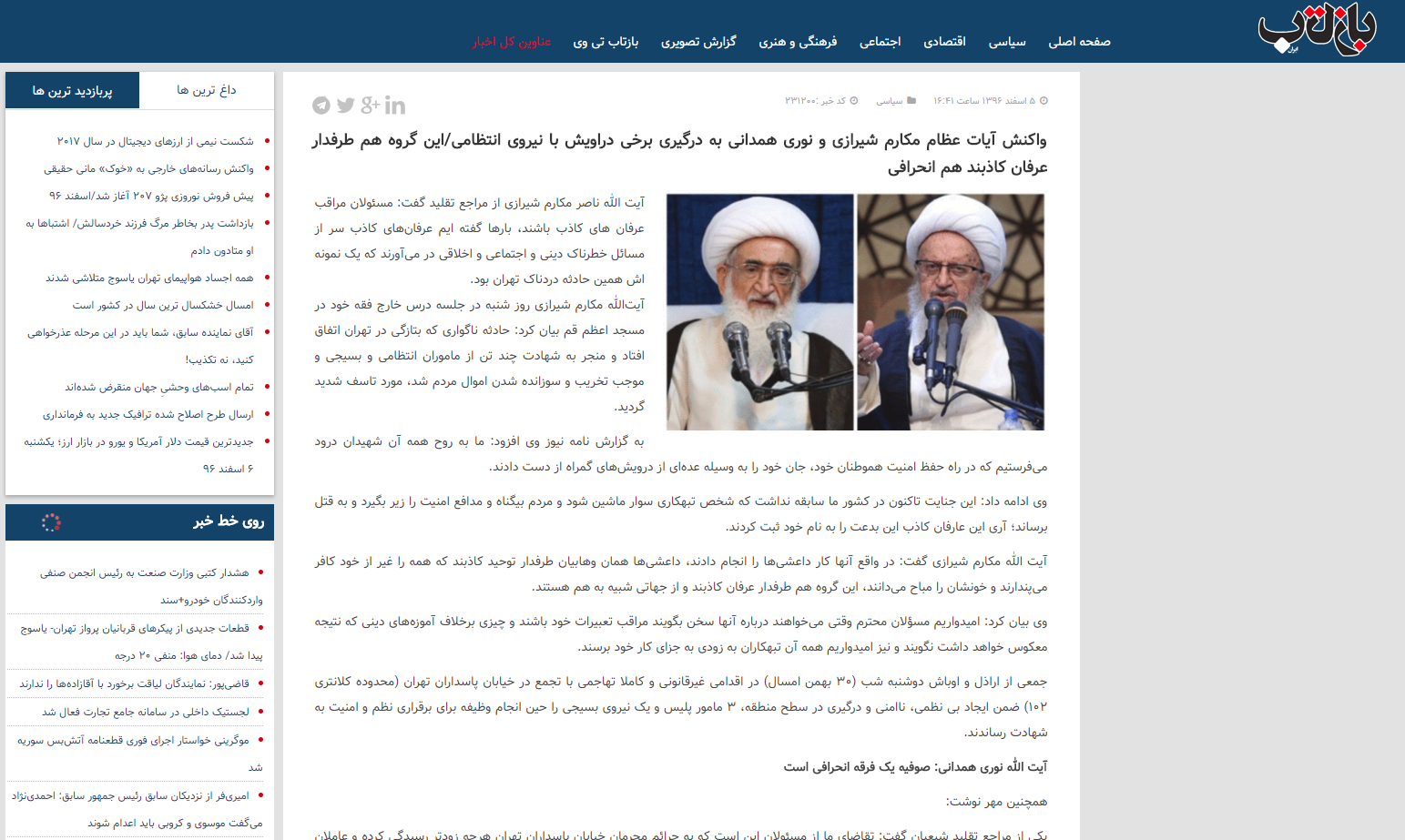 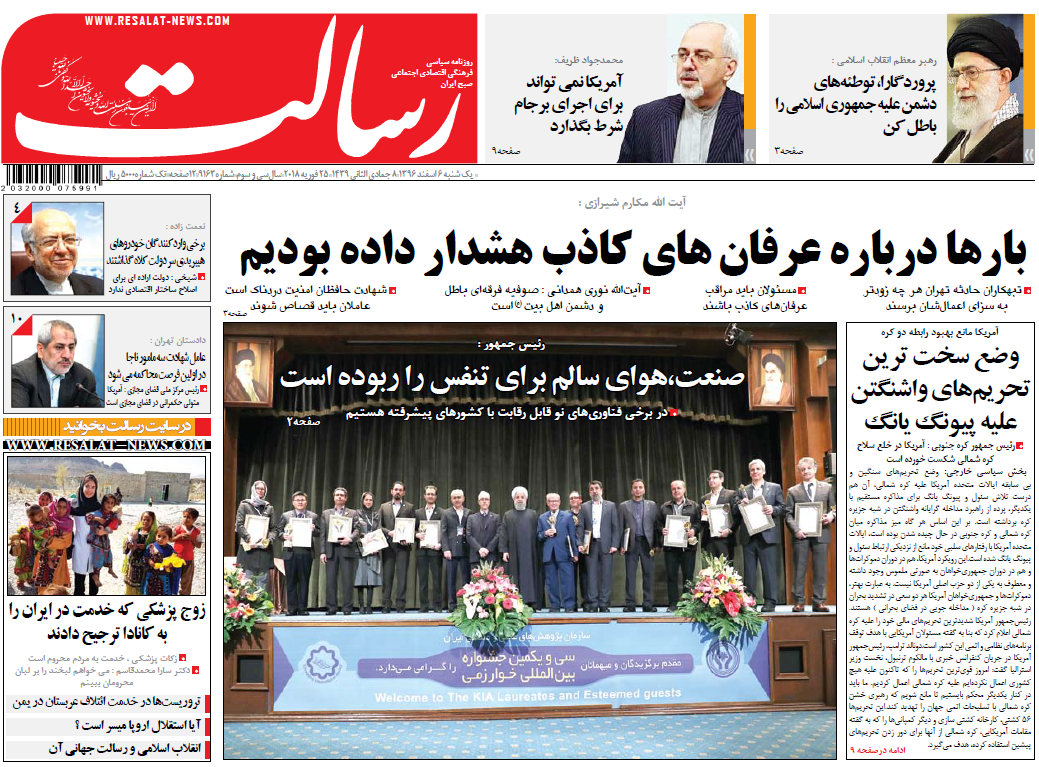 The Kayhan and Vatan newspapers of today which are strongly affiliated with the security circles and the Revolutionary Guards during their coverage of 21st and 22nd February events used the label of “Da’ish or ISIS” in reference to the Sufis. It also labelled the Sufis as “killers” and “terrorists” and if “necessary” to massacre them all cross Iran in order to dismantle and eradicate Sufism. 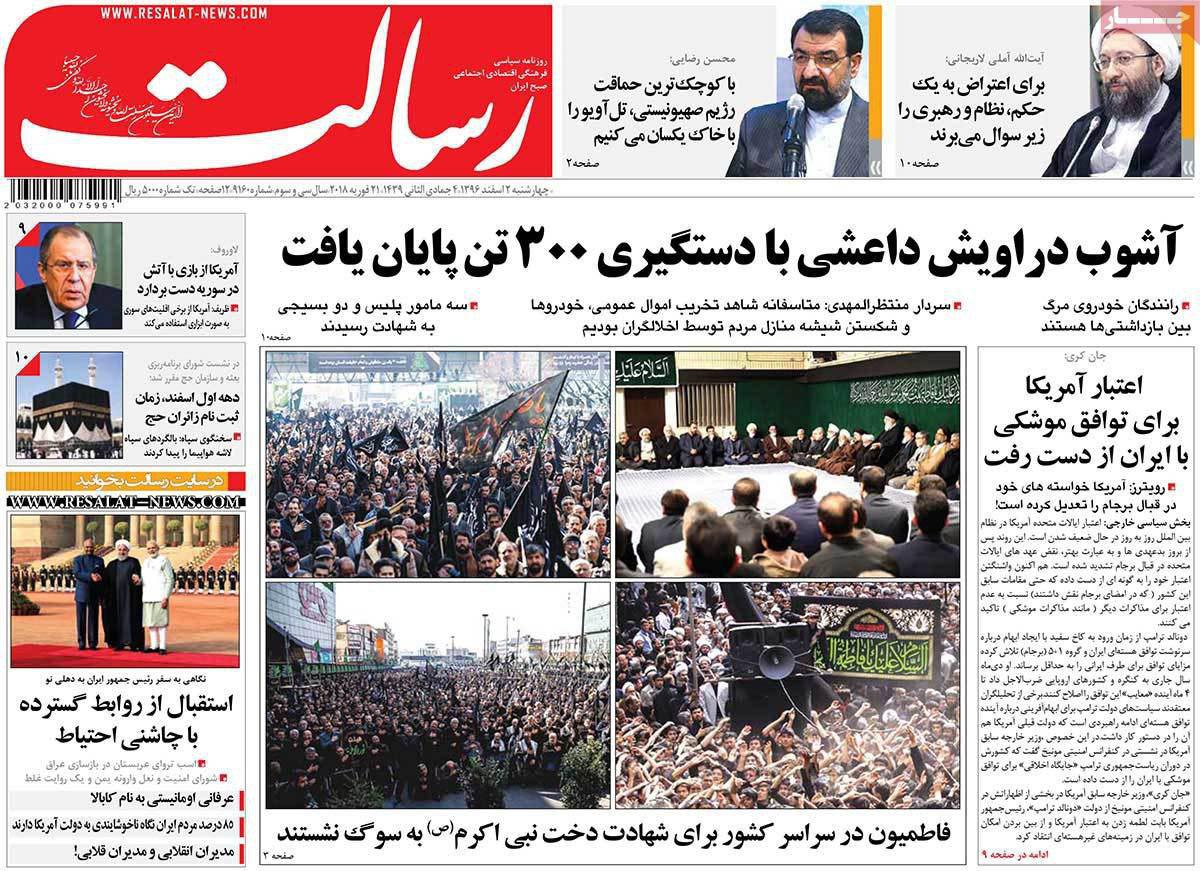 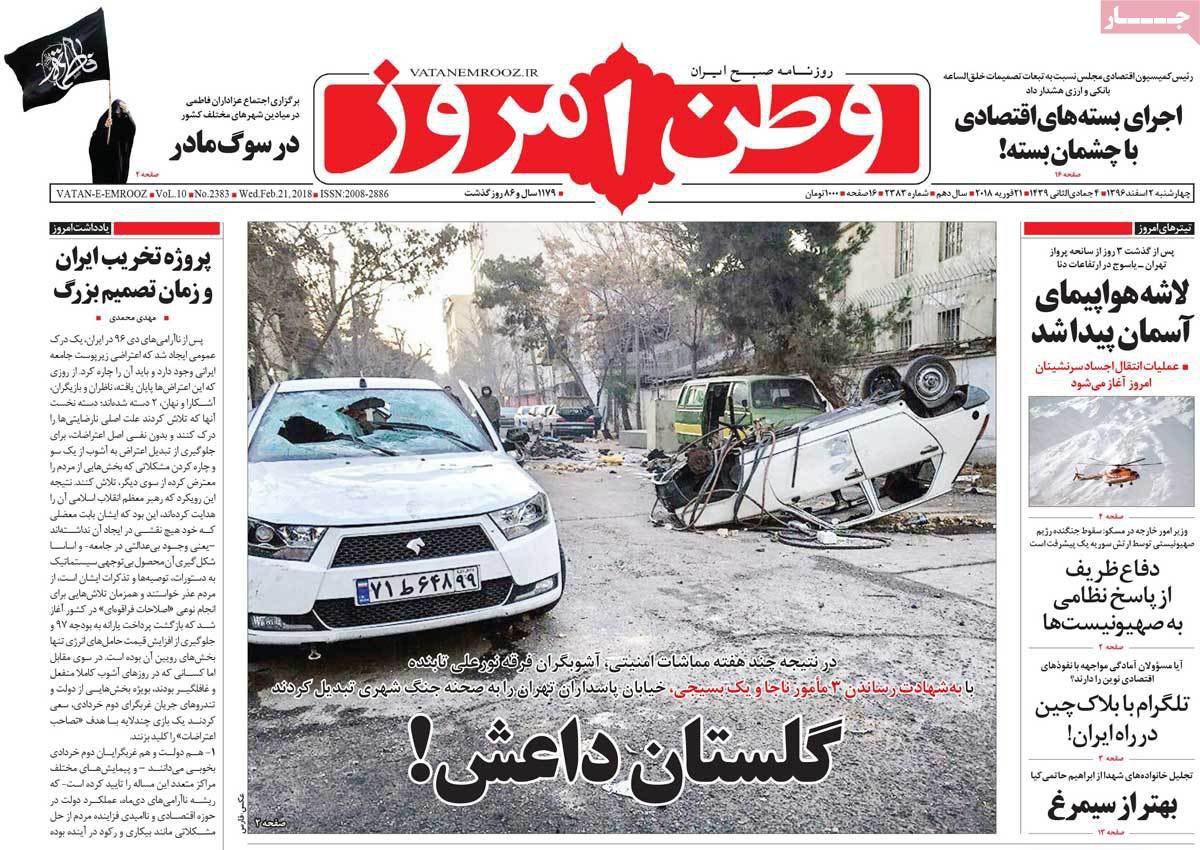 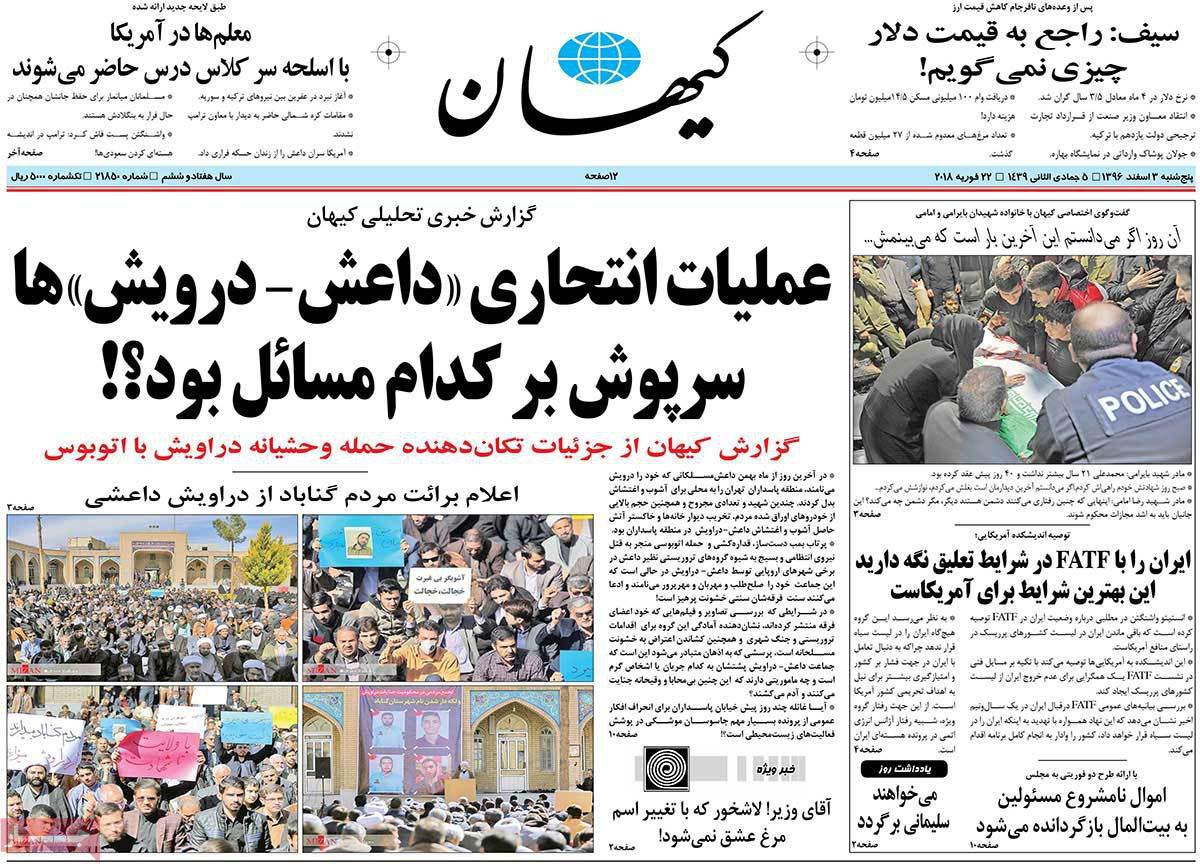 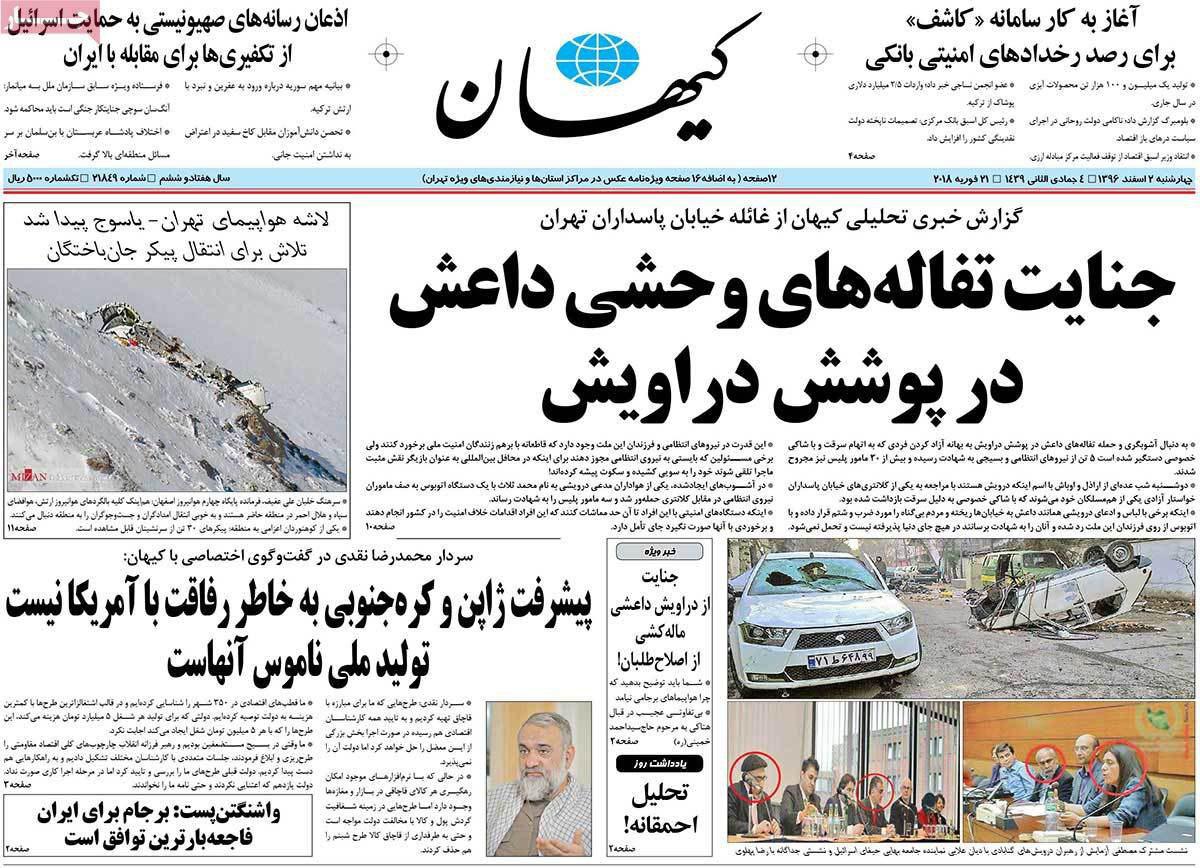 Furthermore, during recent public Friday prayers, on the 23rd February, all across the cities and towns of Iran, the Friday sermons were filled with abhorrence towards Sufism and called for severe treatment of Gonabadi Sufis who were labelled as criminals, as well as demands for the imposition of a death sentence against all Sufis and for eradication of Sufism from Iran. 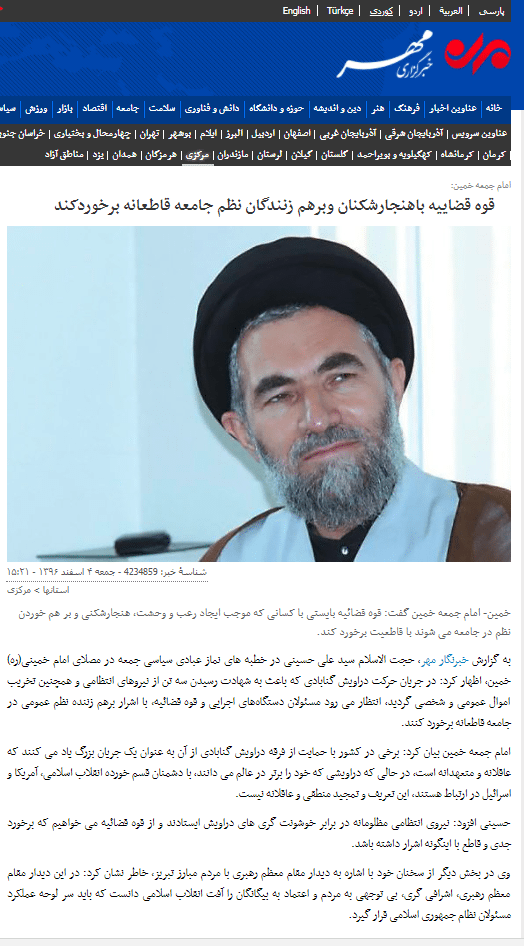 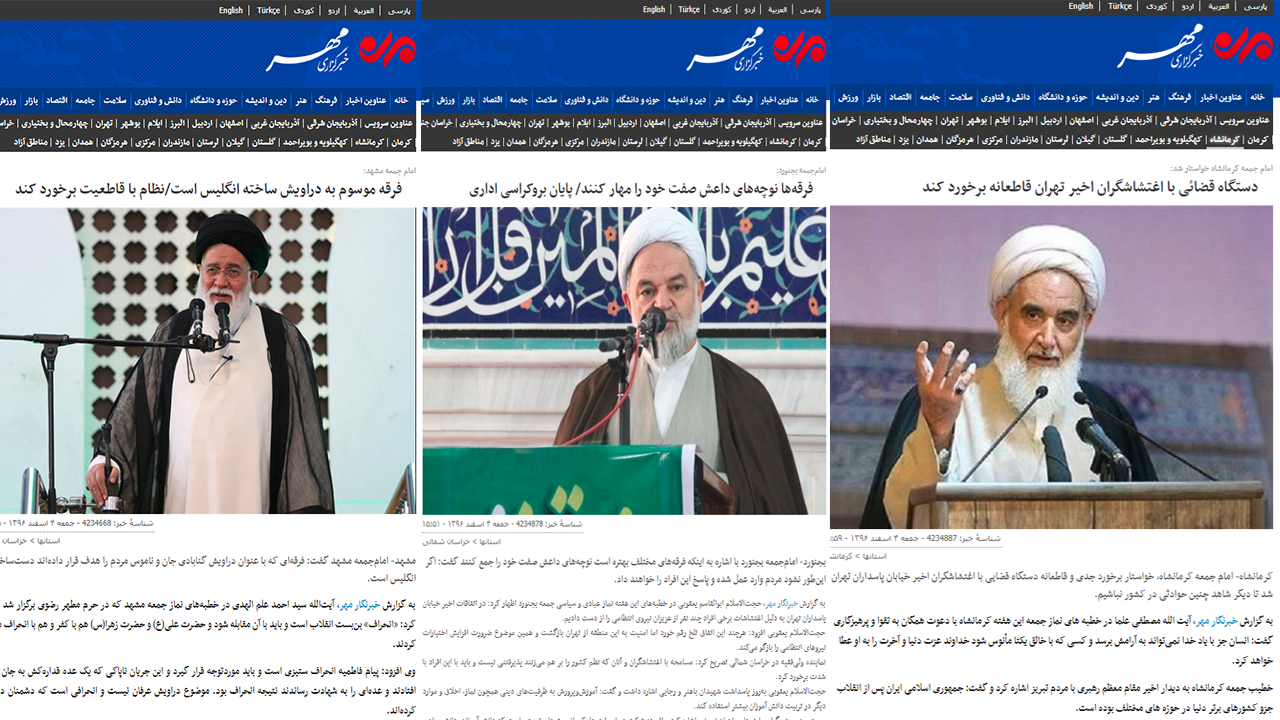 One of the Friday prayers preachers, Kazem Seddiqi, delivered a statement to Basiji and repressive forces on Sunday, 25th February, in which he called for amputation of arms and legs of all Sufis and for their mass execution. 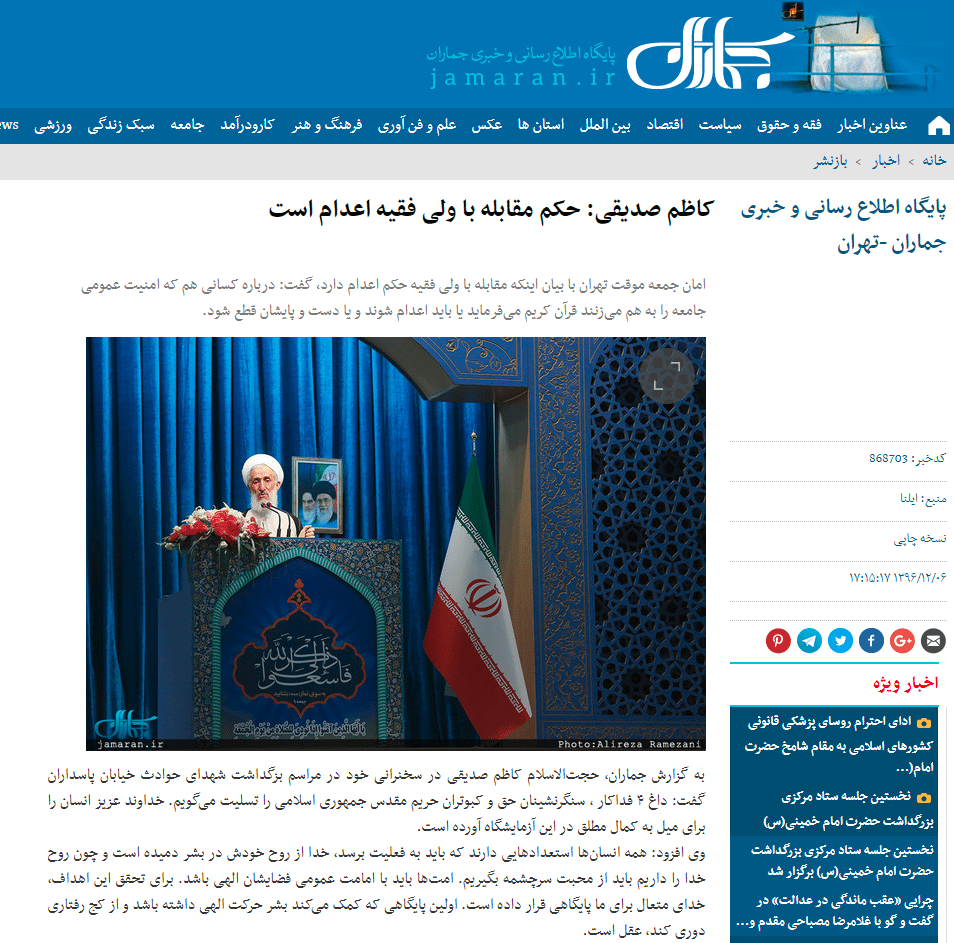 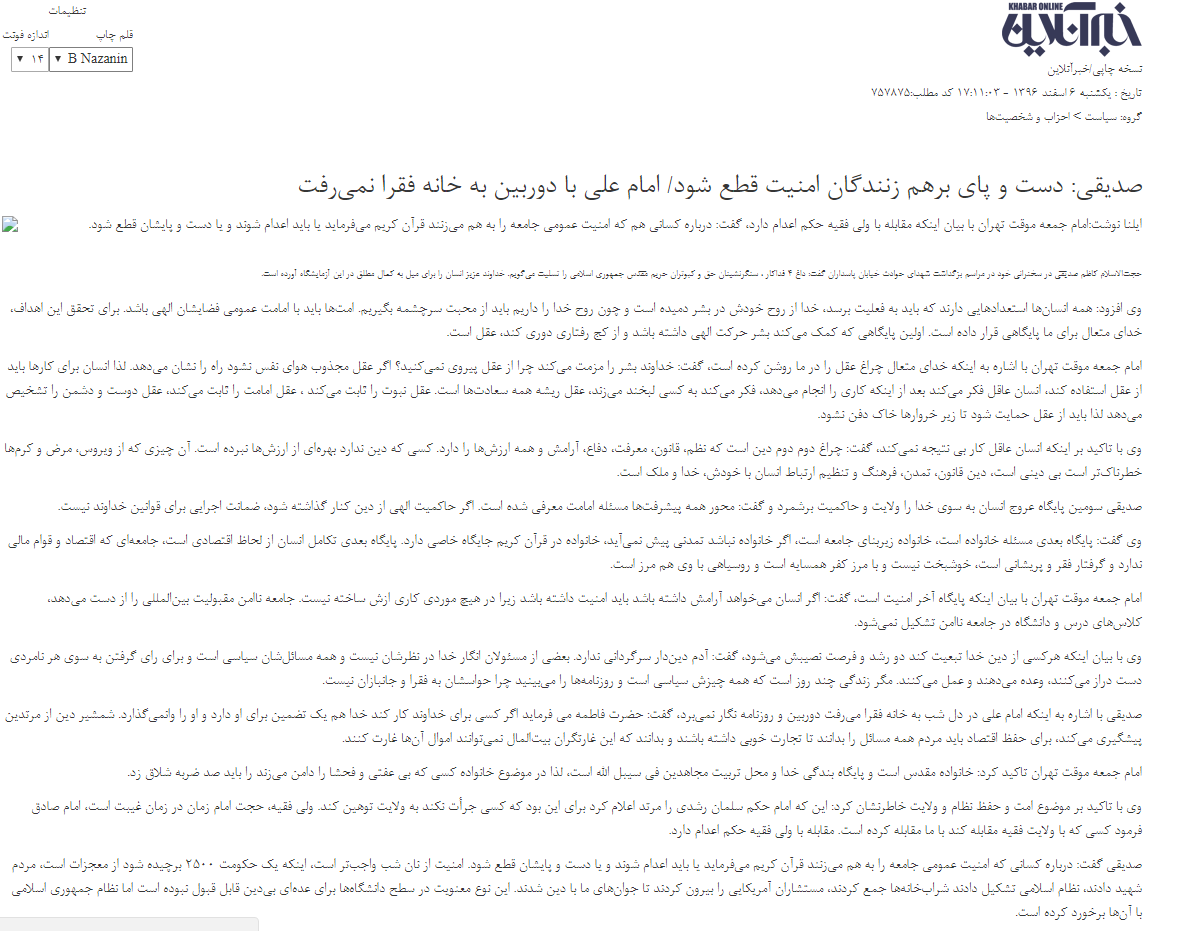 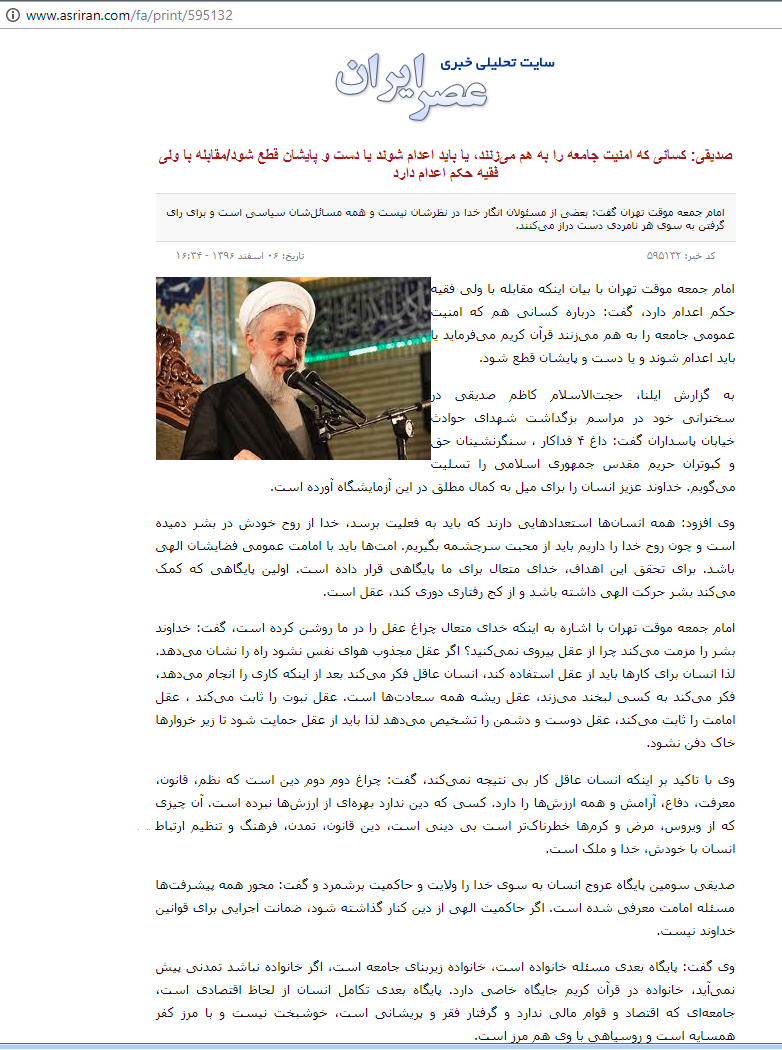 Meanwhile organized Basij groups are also sent to the streets in order to excite crowds by chanting anti-Sufi slogans, and in particular against Gonabadi Sufis and their leader. In these slogans, they use the label “Da’ishi” or “ISIS” against the Sufis and demand their execution.

Also, Sadegh Larijani, the head of the judiciary, said on 26th February, stated that he had ordered Tehran’s prosecutor and the judiciary to punish the defendants as soon as possible. 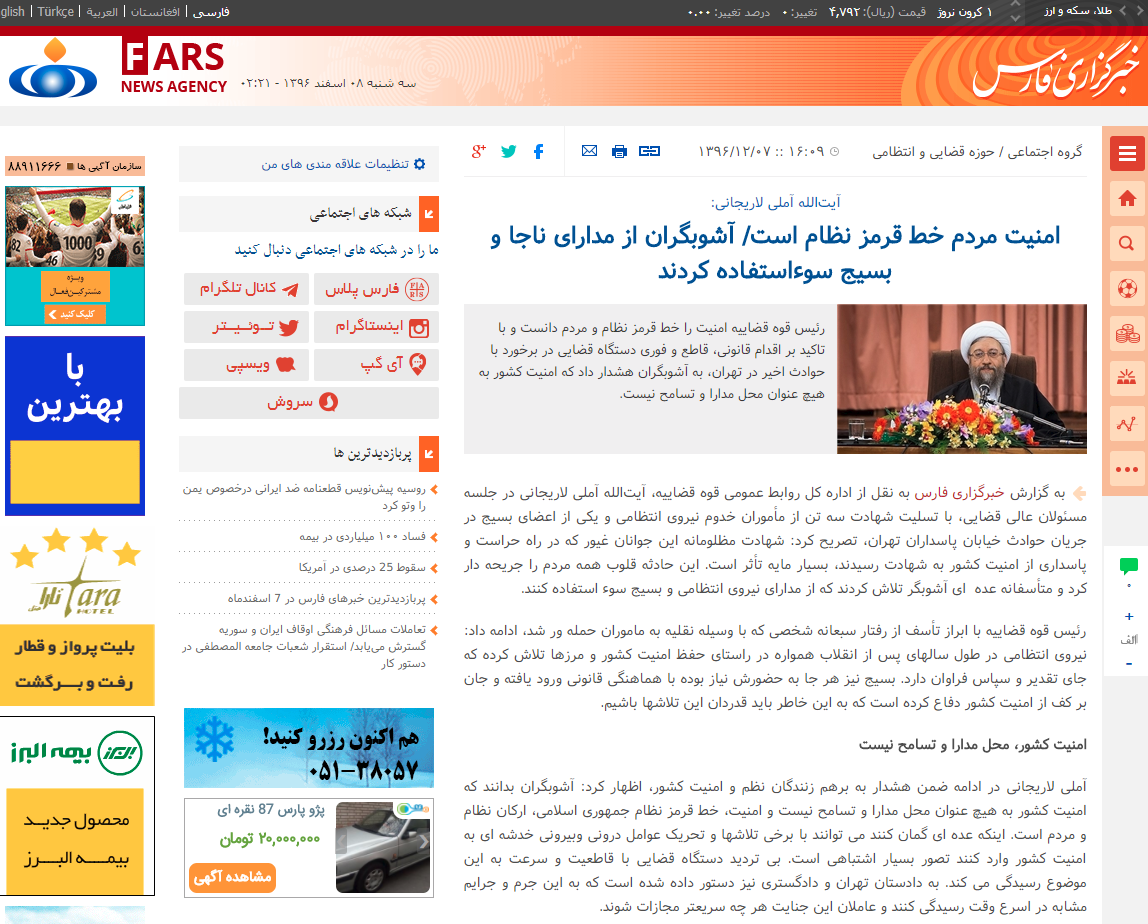 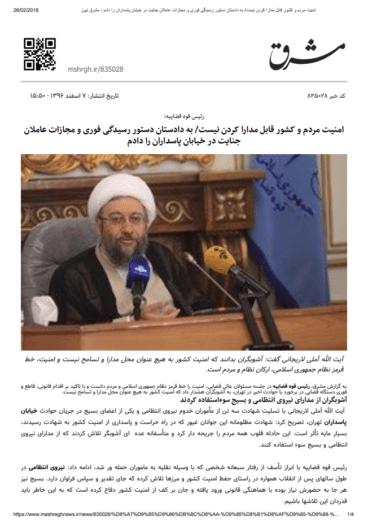 All these, actions, files and allegations are clearly part of a larger conspiracy against the followers of Sufism and Gnosticism, which is part of complex and deceitful plan of the regime against the Sufism.

According to the Tsensim news agency, on 26th February, the police chief, Hussein Ashtari, in a talk with the news agency, raised a new charges against the Sufis by announcing the discovery of traces of internal and external factors in the events of Golestan Seventh Street (recent Sufi protests), by claiming that a series of Supporting and directing the internal and external agents were involved in the Sufi protest, who instigated the clash with the police and the security forces in order to disturb the order of the country. 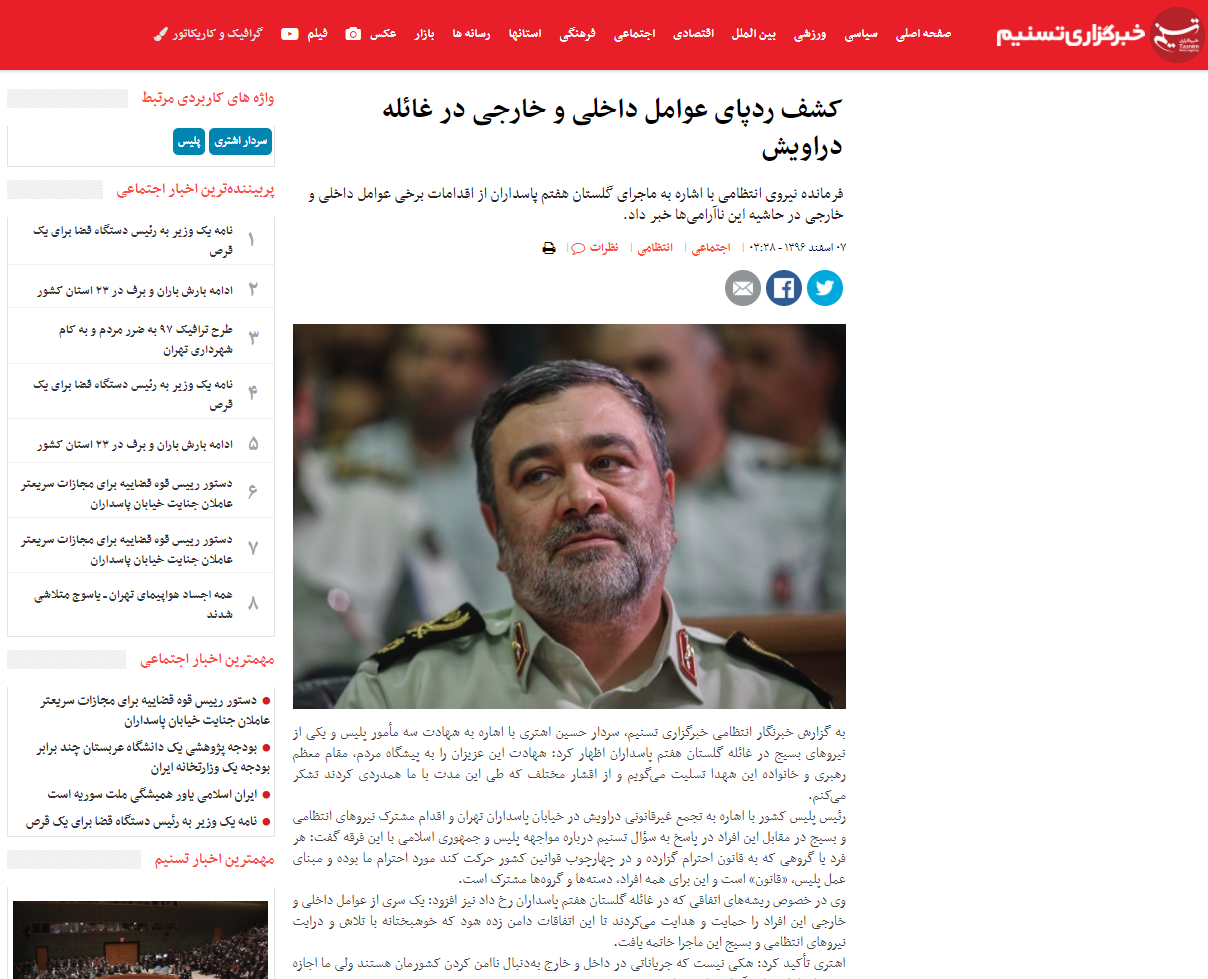 The media channels linked to Sepah (such as javanonline, Keyhan and Farsnews among others) are trying to link all the recent events abroad and eventually to Dr Seyed Mostafa Azmayesh, the founder of International Organization to Preserve Human Rights and to suggest that all this was done under his guidance. 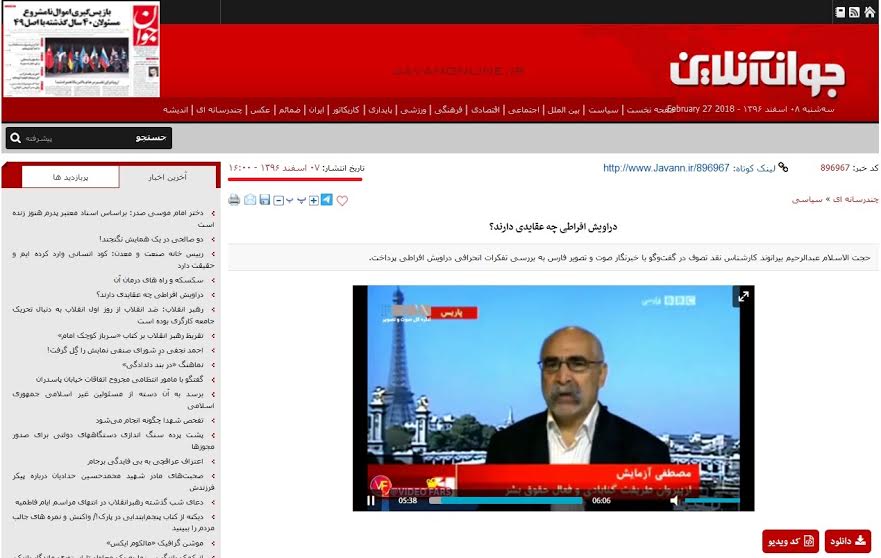 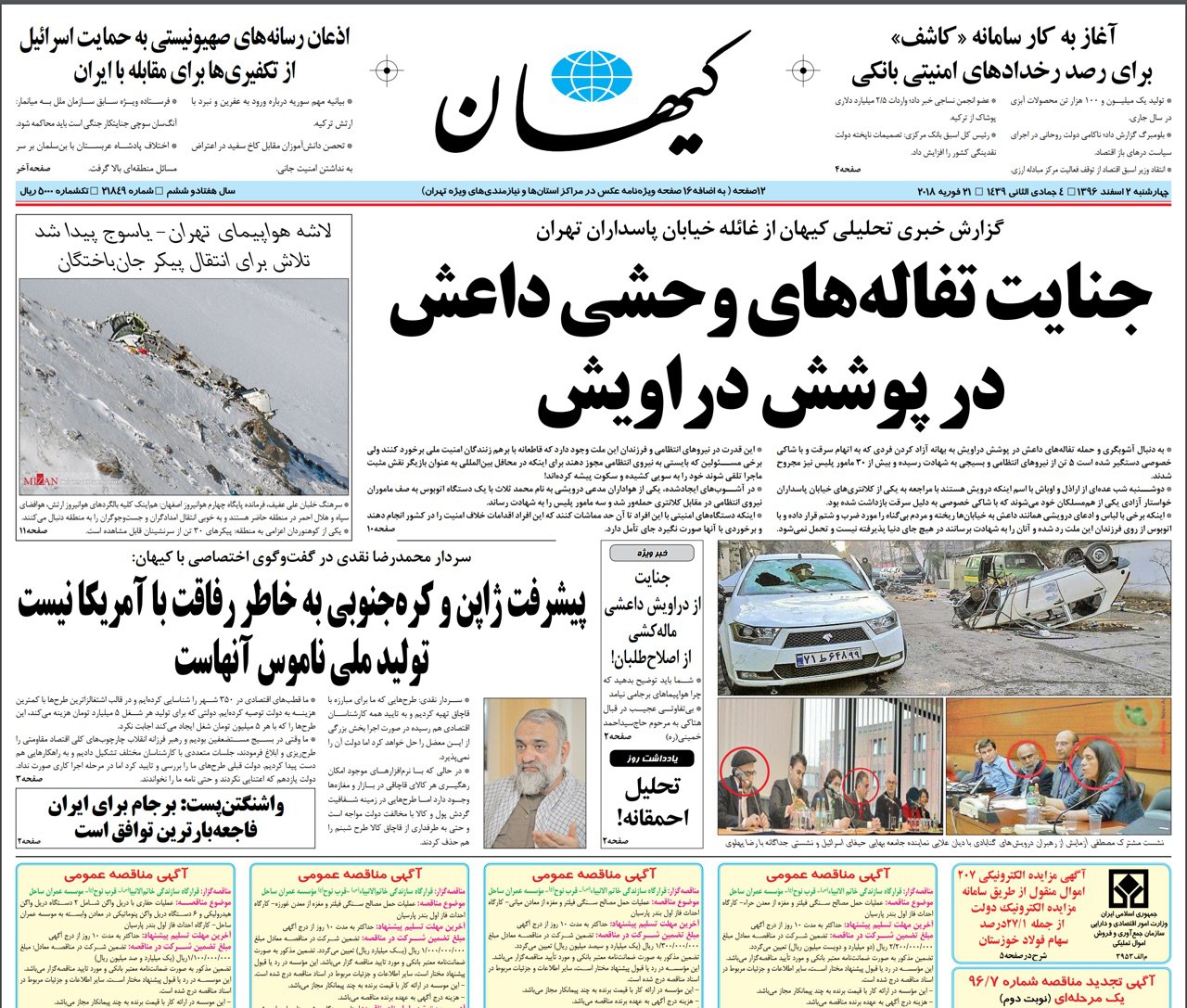 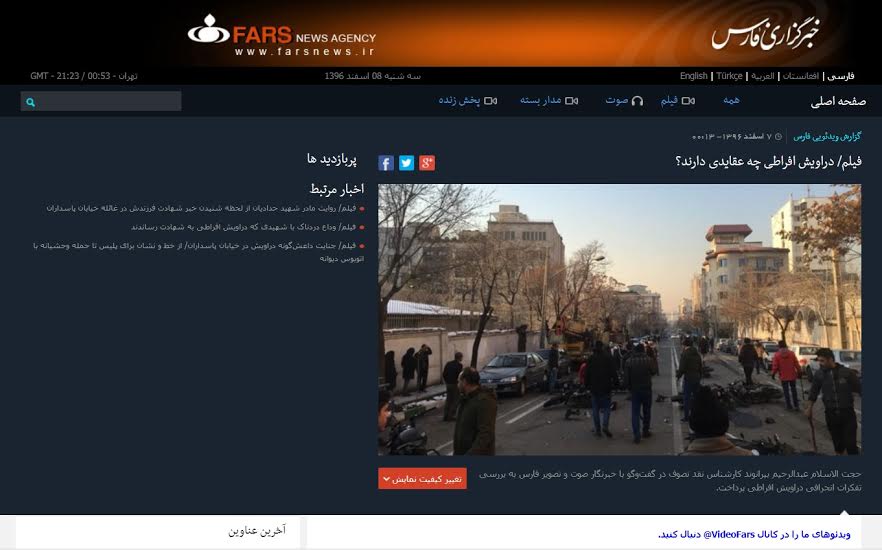 Earlier, other high-ranking officials had claimed that the purpose of Sufis’ activity was to incite foreign countries that “the Iranian regime has lost control of its grip on the country and is suffering from security instability” And for this reason, many parliamentarians, like Hassan Nowroozi, stated that Sufi’ have affiliation with Britain and the United States, and thus called for the most severe punishment against Sufis and the dismantling of their centres throughout the country. 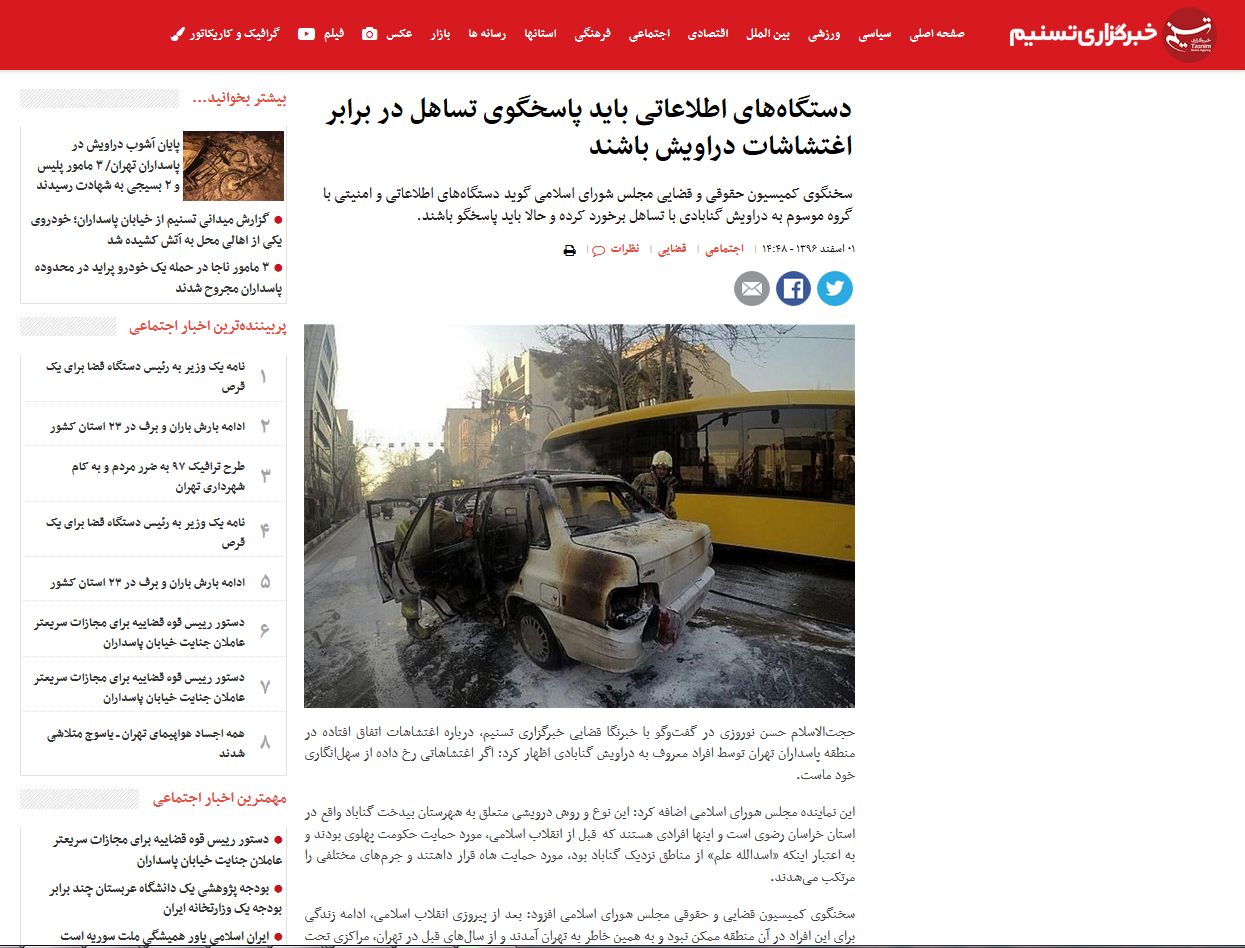 Updated on 28th of February.

The recent and most dangerous plan against the Gonabadi dervishes was announced on February 27, 2018, by Mohsen Araki, who is the general secretary of the International Islamic Approximation and Islamic Association, and a member of the cleric community of teachers in Qom, saying: “We demand that the headmaster of the Gonabadi Sufi order is put on trial.” 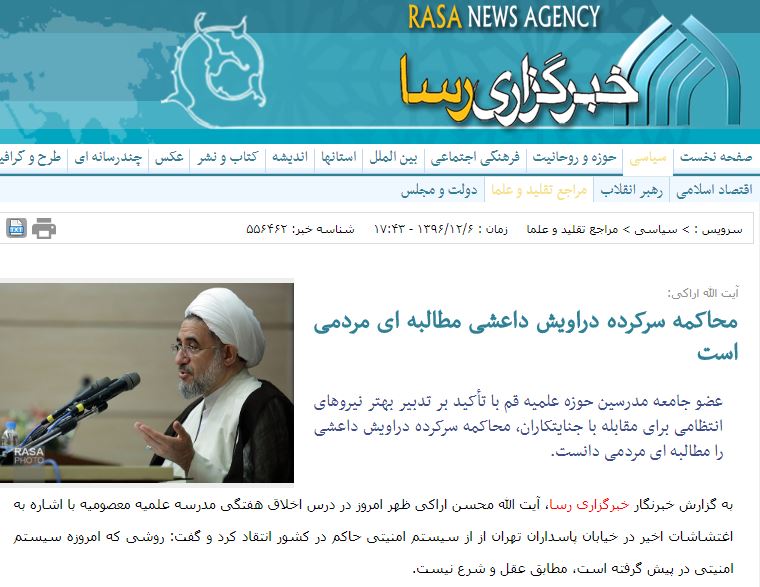 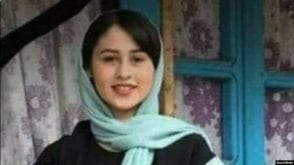