Uncovered ‘Girl From Enghelab Street’ Picks Up Steam In Iran

RFL/RE – Iranians appear to have taken inspiration from a woman who landed in jail late last month for a peaceful protest against Iran’s strict Islamic dress code, echoing frustration at official restrictions on women’s appearance in public.

At least three more women ditched their head scarves again on January 30, more than a month after 31-year-old Vida Movahedi’s daring but silent plea for greater freedom for tens of millions of women in Iran.

Movahedi became a symbol of defiance after she stood on a metal utilities box on a busy street in the Iranian capital on December 27 and silently waved a white scarf from a stick to challenge the obligation since Iran’s 1979 revolution for women to wear head scarves.

She was dubbed “the girl from Enghelab Street” as word — and memes — of her action spread.

Public concern mounted for Movahedi’s safety after reports of her arrest, particularly with the authorities clamping down on protests and possible dissenters as antiestablishment unrest spread to dozens of Iranian cities in late December and early January.

Movahedi has now been freed, according to a January 28 Facebook post by leading Iranian human rights lawyer Nasrin Sotoudeh, who said Movahedi was initially released and rearrested.

Spreading The Word, Ditching The Scarf

Now Iranians on social media praising the protesters claim “the girl from Enghelab Street” has proliferated, and photos testifying to a budding headache for Iranian authorities emerged one after the other on social media on January 29.

They show at least nine other women posing in similar fashion in Tehran and the central Iranian city of Isfahan. One has reportedly been detained by the authorities, while the fates of the others are unclear.

Iran’s clerically dominated authorities insist that women, even foreign visitors, must cover their head and hair in public with a scarf, known as the hijab.

In the photos, the women’s heads are uncovered as they stand on utility boxes or other objects on the streets of Tehran with scarves held up on sticks.

One woman who was said to have been arrested and was identified as Narguess Hosseini, stood at the same spot as Movahedi.

Women who appear in public without the obligatory hijab can face fines and prison sentences ranging from 10 days to two months.

Some Iranians drew comparisons between the “girl from Enghelab Street” posts and the late civil-rights activist Rosa Parks, whose refusal to sit in the “colored section” of an Alabama bus in 1955 resonated throughout the United States.

“The girl from Enghelab Street is being multiplied while blowing a new spirit to the civil-rights struggle and civil disobedience of the Iranian people,” dissident journalist and former Culture Ministry official Issa Saharkhiz said in a Twitter post that included an image from Isfahan.

“I don’t think women can tolerate the pressure [over the hijab] for a long time,” Sotoudeh, who has been jailed in Iran for her defense of human rights, told RFE/RL by telephone from Tehran. “In all civil-rights protests with similar demands, a permanent result has been reached after a long time by respecting two principles: being [public] and peaceful.”

Writing on her Facebook page, Sotoudeh said that women should be given the right “to manage” their own bodies.

In one photo posted online by a social-media activist known as Vahid Online on January 30, two young women with short hair can be seen standing together on concrete posts in Tehran while holding up scarves on sticks. 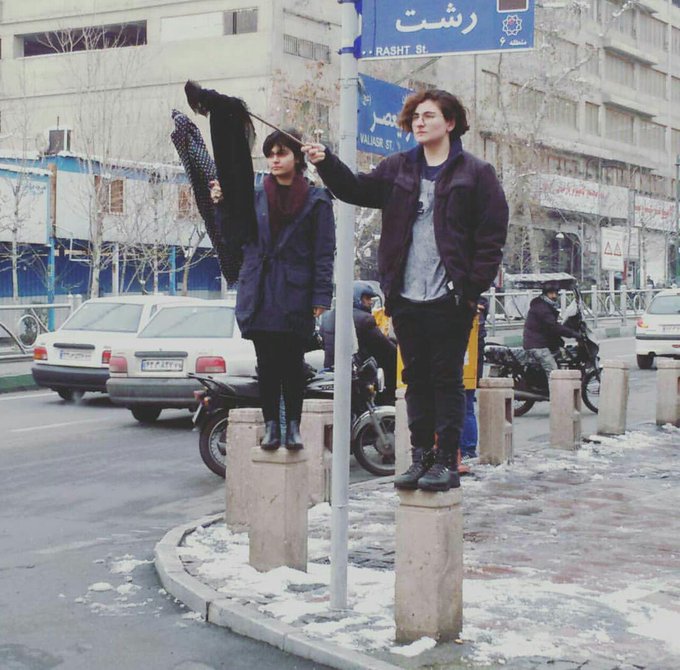 Iranian Nobel Peace Prize laureate Shirin Ebadi said the current acts of defiance were the culmination of years of protests against the hijab.

“The first demonstrations against the hijab took place a few days after the revolution on March 8, 1979. Since then, we’ve seen other acts of protests against the imposition of the dress code,” Ebadi told RFE/RL in a reference to broad expressions of concern nearly four decades ago.

Iranian women have more quietly resisted the hijab for decades by pushing the boundaries of acceptable dress and criticizing the restrictions.

Some have posted hijab-less photos on a Facebook page founded by exiled journalist Masih Alinejad, whose call for women to wear white scarves and protest the hijab on Wednesdays appears to have been behind Movahedi’s protest.

“I hope that my sisters continue this protest to demonstrate that women, like men, [should be] free to decide on their clothing. The [Iranian] establishment should acknowledge this minimum for women,” Ebadi said.

In a fresh sign of growing support even among men for the antihijab protests, the picture of a young man mimicking the recent acts of defiance by women emerged on social media on January 30. The unidentified man is seen standing on a metal box while holding a white scarf.