theweek – A second woman has been arrested in Iran for disobeying the country’s strict dress laws, which require women to be covered from head to toe.

The as-yet unidentified woman was detained in Tehran after standing on a telecoms box, taking off her headscarf and holding it in the air on a stick.

After a similar action last month, 31-year-old Vida Movahed was arrested in central Tehran. She was released following pressure and a publicity campaign led by the country’s most prominent human rights lawyer, Nasrin Sotoudeh.

While not directly linked with the wave of political protest which hit Iran at the time, “her action embodied the aspirations of a movement of young Iranians frustrated with the lack of social and political freedoms”, says The Guardian.

The so-called ‘hijab protest’ seems to have struck a chord with many – especially younger – Iranians. Thousands of people, including men, have changed their profile pictures in support of Movahed. 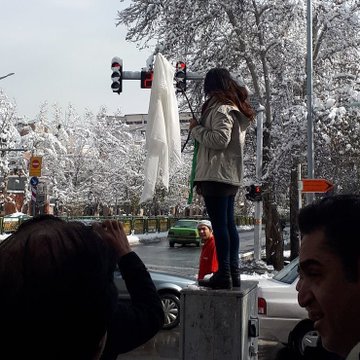 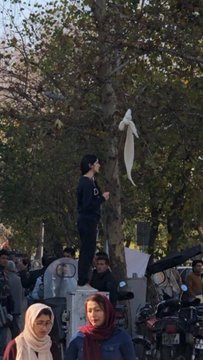 These two women are being hailed as heroes by many Iranians for protesting the compulsory hijab rule that has violated women’s rights in Iran for nearly four decades.

Now, in another sign that the protest could be gathering momentum, pictures posted on social media yesterday showed at least three other women standing on top of telecoms boxes in Tehran in an apparent show of solidarity.

The issue of Iran’s dress code for women has emerged as a major source of tension in recent years. A growing number of women, predominantly in Tehran, have begun refusing to wear a hijab while driving, arguing that a car is a private space where they can dress more freely. It now seems this protest has moved from the car to the street.