Al-Arabia – The Iranian authorities on Sunday released a woman who was arrested in the center of Tehran after she took off her headscarf in protest of the law enforcing women to wear headscarves in Iran her lawyer said,

The lawyer Nisreen Stouda, of Iran’s Human Rights Defenders Center in Tehran, said in a statement that her release camew after the government succumbed to calls by human rights and civil rights activists for her release.

Stouda wrote on her Facebook page that when she checked with the prosecutor’s office to follow up on the woman’s case on Sunday, she was informed that the she had been released. 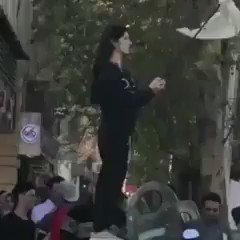 “I hope that she will not be harassed or abused by the judicial authorities because of a simple act that is considered her basic and natural right,” she said.

The woman, 31-year-old, Wida Mowahed a mother of a 19 month old daughter, stood in the middle of Tehran’s “Inqlab” (revolution) street raising her scarf on a stick and waving it like a flag.

A video of the protest was widely shared a three days before the outbreak of the popular protests in Tehran on December 27.

Iranians consider Mowahed’s action as one of the most important symbols of protests by women in Iran.