VOA — The U.N. Security Council will visit Washington on Monday for a working lunch with U.S. President Donald Trump and to conduct a visit to examine alleged Iranian missile parts.

Council members will have the opportunity to view the large pieces of short-range missile debris that Ambassador Nikki Haley unveiled at a news conference in December at a military base in Washington.

qAt the time, Haley said the military equipment was “undeniable” evidence that Iran was illegally arming Houthi rebels in Yemen.

“It was made in Iran, then sent to Houthi militants in Yemen, from there it was fired at a civilian airport, with the potential to kill hundreds of innocent civilians in Saudi Arabia,” Haley said in December. 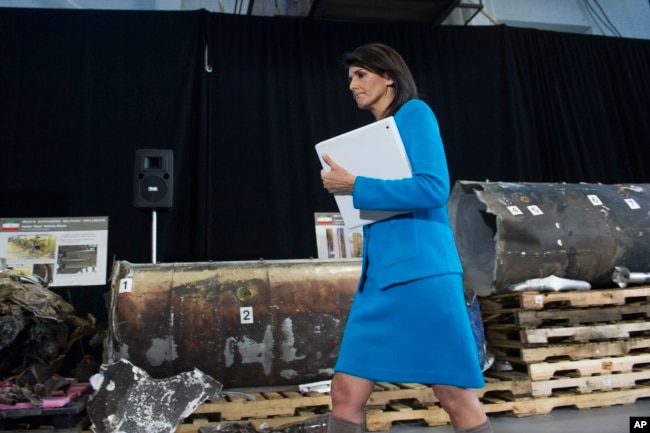 FILE – U.S. Ambassador to the U.N. Nikki Haley walks in front of allegedly recovered segments of an Iranian rocket during a press briefing at Joint Base Anacostia-Bolling, Dec. 14, 2017, in Washington.

The Americans have indicated that they plan to hold Iran accountable at the United Nations for violations of an international arms embargo on the Yemeni rebels.

It is part of the Trump administration’s larger strategy of remaining in the 2015 Iran nuclear deal, but trying to bring consequences against Tehran for its other negative behavior in the region, including supporting groups like the Houthis and Hezbollah in Lebanon.

Haley accused Tehran in December of hiding behind the nuclear deal, saying “these are the things they are doing while we are all looking the other way.”

The missile debris is on loan from Saudi Arabia and the United Arab Emirates, which are leading a coalition against the Houthis. The coalition’s nearly three-year-long air war has caused a severe humanitarian crisis in Yemen.

President Trump has invited Security Council members to a working lunch, something he did last year as well.

National Security Advisor H.R. McMaster will accompany council members to the U.S. Holocaust Memorial Museum.According to the U.S. Mission to the United Nations, they will visit an exhibition on the Syrian conflict entitled Syria: Please Don’t Forget Us.