VOA – U.S. Vice President Mike Pence reiterated Tuesday the Trump administration’s view that the international deal on Iran’s nuclear program should be changed, and said moving the U.S. Embassy in Israel to Jerusalem is a tangible sign of U.S. commitment.

As he met with Israeli President Reuven Rivlin, Pence said the U.S. is sending a signal to its European allies about the need to alter the 2015 agreement that brought sanctions relief to Iran in exchange for limiting the country’s nuclear program to ensure it would not develop nuclear weapons.

U.S. President Donald Trump and Israeli leaders have objected to the agreement, arguing Iran got too much while giving up too little.

FILE – Representatives of world powers meet to pin down a nuclear deal with Iran, on March 30, 2015, in Lausanne, Switzerland.

Negotiators from the United States, Britain, China, France, Russia and Germany all worked to reach the deal with Iran. European leaders have defended the deal as working, including citing the conclusions of the International Atomic Energy Agency, the U.N. nuclear watchdog agency that is in charge of monitoring Iran’s compliance.

The European Union has also expressed its support for continuing to seek a two-state solution in negotiations with Israel and the Palestinians with Jerusalem as a shared capital.

EU foreign policy chief Federica Mogherini reassured Palestinian President Mahmoud Abbas of that position during talks Monday, the same day Pence announced the U.S. embassy in Israel would move to Jerusalem by the end of 2019. 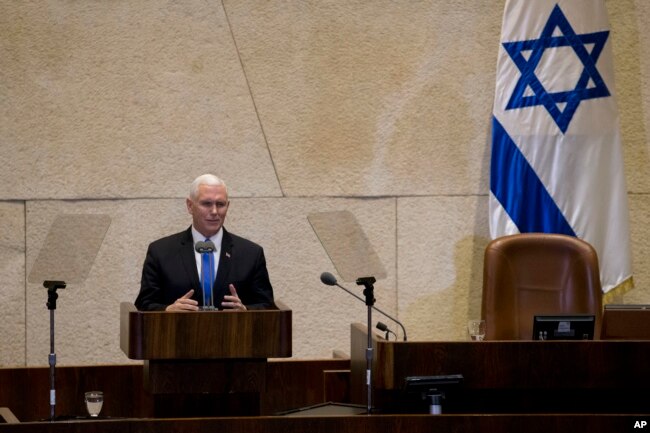 “In the weeks ahead, our administration will advance its plan to open the U.S. Embassy in Jerusalem and that United States Embassy will open before the end of next year,” Pence said, addressing the Knesset, Israel’s lawmaking body, in Jerusalem.

Randolph-Macon College history professor Michael Fischbach said it is not surprising to see a difference in U.S. and European positions.

“I think the Europeans and indeed most of the world community for a long time has had very different visions for how Israel and the Palestinians should forge a lasting peace, a vision based on internationally accepted norms, based on international law, based on U.N. resolutions, and that has been quite at odds with United States policy over the decades and most recently as expressed by President Trump,” Fischbach told VOA. “What will be interesting is to see whether the Europeans actually move forward and propose some sort of alternative peace process.

Trump’s decision parted from longstanding U.S. policy that left the status of Jerusalem as an issue to be resolved by Israeli and Palestinian negotiators.

U.S. Secretary of State Rex Tillerson had previously said the embassy relocation would likely take years. But on Monday, State Department spokesperson Heather Nauert confirmed the administration “will advance its plan to open the U.S. Embassy in Jerusalem and will open the embassy before the end of the year.” Nauert noted in the written statement that Tillerson “has been clear that safety and security is his top priority.” 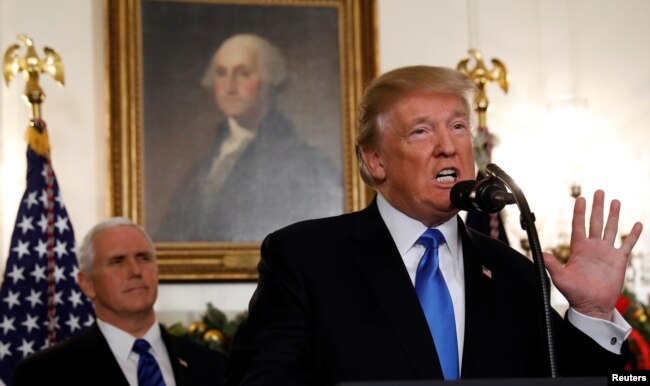 U.S. Vice President Mike Pence listens as U.S. President Donald Trump announces that the United States recognizes Jerusalem as the capital of Israel and will move its embassy there, during an address from the White House, Dec. 6, 2017.

Netanyahu thanked Trump and Pence for what he called the “historic statement” and declared the U.S.-Israel relationship has “never been stronger.” He later told reporters that the sooner the Palestinians “accept the truth” about Jerusalem, the sooner the two sides can reach an agreement “that will create a better future for both our peoples.”

Palestinian leaders have been sharply critical of Trump’s decision. 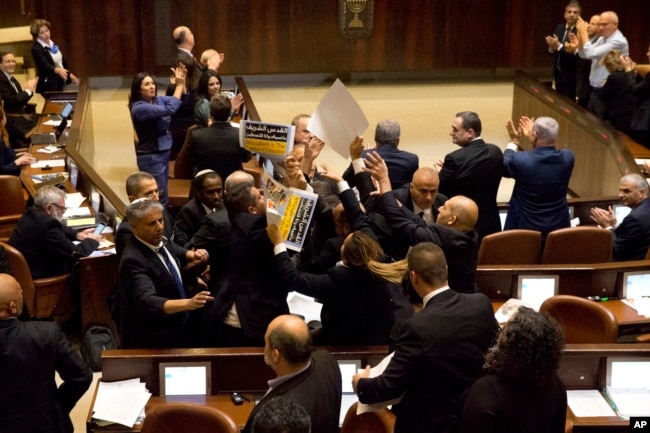 A group of Arab lawmakers greeted Pence’s Knesset speech with protests and signs that said, Jerusalem is the capital of Palestine,” before being removed from the chamber.

Palestinian chief negotiator Saeb Erekat called Pence’s words “a gift to extremists” and proof that the Trump administration “is part of the problem rather than the solution.”

“His message to the rest of the world is clear: violate international law and resolutions and the U.S. will reward you,” Erekat said. Palestinian President Mahmoud Abbas said after Trump’s decision to recognize Jerusalem that the United States could no longer play a role in the peace process.

Victor Beattie in Washington contributed to this report.