VOA – The U.S. House of Representatives overwhelmingly passed a resolution Tuesday supporting the Iranian people’s right to free expression while condemning the country’s leadership for crackdowns on recent protests.

The 415-2 vote comes just days ahead of the beginning of a congressionally mandated 60-day window for lawmakers to address U.S. President Donald Trump’s decision to not re-certify the 2015 Iran nuclear deal.

At least 21 people have been killed in nationwide anti-government protests that began last month.

“With the passage of this resolution, we state that America stands with the Iranian people,” Representative Ed Royce, Chair of the House Foreign Affairs Committee, said Tuesday. 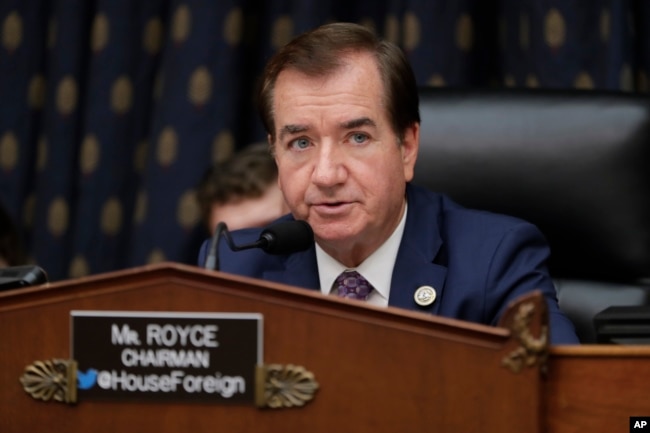 FILE – House Foreign Affairs Committee Chairman Ed Royce, R-Calif., presides over a markup of a bill to expand sanctions against Iran with respect to its ballistic missile program, on Capitol Hill in Washington, Oct. 12, 2017.
The protests have since dwindled amid arrests of more than 3,700 people, according to one Iranian lawmaker. The demonstrations were the largest in Iran since the June 2009 “Green Revolution,” triggered by a presidential election that protesters said was fraudulent.

Trump tweeted strong support for the Iranian people throughout the recent protests.

In a series of tweets earlier Tuesday, Ayatollah Khamenei, the Supreme Leader of Iran, criticized Trump for tweeting his concerns about the protests and his statements about the intentions of the Iranian people.

U.S. lawmakers said Tuesday the resolution was not an attempt to target the Iranian people.

“In standing with the Iranian people, we must explain that they are not the target of our sanctions. U.S. sanctions target the oppressive destabilizing regime, not the people of Iran,” Royce said.

The House vote comes at a key decision point for the U.S. Congress. Trump threw the 2015 nuclear deal negotiated by the Obama administration into doubt in October when he declined to re-certify Iranian compliance, pushing for new terms.

“This president and this administration are absolutely committed to continue to bring the full economic weight of the United States and these economic sanctions to bear on Iran,” Vice President Mike Pence told VOA contributer Greta Van Susteren last week. “Now, we’re also working with the Congress to arrive at a new agreement, a new set of conditions for sanctions going forward.”

The timing of the protests increased the need for a decision on the deal, with the window for a congressional response set to open January 11. Lawmakers are likely to find a middle-ground solution that would address Trump’s concerns about the deal while preserving it and, thus, avoid the significant international consequences of a withdrawal.

While the partisan debate over the Iran nuclear deal will continue, the protests have created some common ground for discussion.

“In this House, we are on both sides of the Iran nuclear deal, but we are united in knowing that Iran is not an ally of the United States, at least the Islamic Republic of Iran is not,” Representative Brad Sherman, a Democrat on the House Foreign Affairs Committee, said Tuesday. “And this House never agreed to ignore extreme human rights abuses simply because the government of Iran has agreed to limitations on its nuclear program.”

The window for congressional action on those limitations closes in March.

Katherine Gypson is a reporter for VOA’s News Center in Washington, D.C. Prior to joining VOA in 2013, Katherine produced documentary and public affairs programming in Afghanistan, Tunisia and Turkey. She also produced and co-wrote a 12-episode road-trip series for Pakistani television exploring the United States during the 2012 presidential election. She holds a Master’s degree in Journalism from American University. Follow her @kgyp