AL-Arabia – Despite the scandalous attempt of the regime to launch counter-demonstrations in some cities, people in different cities of Iran came to the streets again on the seventh day of the uprising to express their oppostition to the ominous regime.

Despite the presence of a large number of security forces, including police and intelligence personnel, IRGC, Bassij, plainclothed riot police and mercenaries on motorcycles, demonstrations and clashes have been reported from various parts of Tehran. 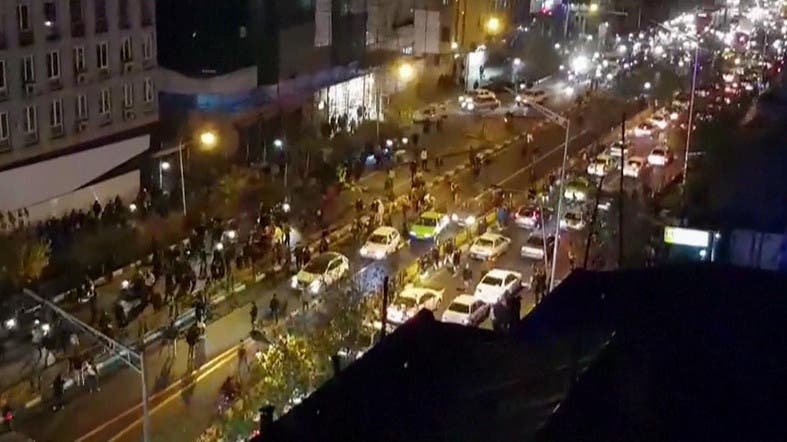 Protests on Dec. 3 in the southern Iranian city of Dezful, Khuzestan

#IranProtests: Crowds of protesters in the southern city of Dezful of Khuzestan Province shout: ‘Shame on you Khamenei, leave the country’.Read more updates: http://ara.tv/gkgq9

Some young people were injured and harmed in these clashes, but others replaced them. In Gandhi Street, it was not possible to move to Enqelab Square due to heavy traffic and the people rallied toward Enqelab Square chanting “Death to the dictator”.

Demonstrations were also held at the Jomhouri Ave. while in Valiasr Ave. people gathered chanted “I’ll kill whoever killed my brother” and clashed with the riot police.

In Kargar Ave. the crowd chanted “Death to the Dictator”, “I’ll kill whoever killed my brother”, “Death to Khamenei” and “We shall fight, we shall die, we shall take Iran back.” In the Keshavarz Boulevard too people rallied. The regime has installed sniper rifles on the roof of government buildings surrounding Enqelab Square.

In yet another incident, the families of detainees in Tehran gathered in front of the Evin Prison Thursday (January 4). According to the regime, 450 people have been arrested in Tehran between December 30 and January 1. In order to prevent the protests in Tehran from spreading, the regime has imposed a heavy checking across the city.

Other cities:
Demonstrations and clashes continued to take place in dozens of cities on the seventh day of the uprising. In Zahedan’s Shirabad district skirmishes took place between demonstrators and anti-riot forces. Mercenaries reportedly opened fire on protestors and they pelted stones in return.

In Ahwaz, the Basijis arrived on the scene in police uniforms and tried to restore order. The youth of the Shadegan region (Ahwaz) are confronting the attacks of anti-riot guards with throwing stones.

In Bandar Abbas, the slogan of death to Khamenei, death to the dictator resonated everywhere. In Dezful, protesters raised slogans. Clashes also broke out in the Sabzeh Ghaba neighborhood.

In Malayer, slogans targeting Ayatollah Khamenei filled the atmosphere. In Isfahan, clashes broke out between people who were chanting slogans and anti-riot police officers who shot directly at the protestors.

In Ghourtan in Isfahan, clashes broke out and the sound of a blast was heard. Some law enforcement officers fled during a clash with demonstrators in Joughabad, Isfahan. In Kermanshah, some police officers escaped the brave youth.

In Torbat Heydariyeh, a large crowd gathered on the streets of Farmandary. People chanted slogans against anti-riot forces: Do not be afraid, do not be afraid. We are all together. Leave Syria Think about us, they shouted.