One Difference Between 2009 vs 2018 Iran Protests? 48 Million Smartphones

The technology-assisted protests were dubbed the first “Twitter revolution.”

Flash forward to 2018 and technology again is playing a role in demonstrations sweeping cities across Iran.

But much has changed in the intervening years when it comes to the communication tools used by Iranian citizens for organizing and publicizing protests.

Here are some of the main changes:

1. The rise of smartphones has brought more Iranians on to the internet

In 2009, fewer than 15 percent of Iranians had internet access, according to the World Bank.

While Twitter was used to get news of the protests out to the world, it is unclear how much of a role it or any service played to help organize political actions. Word of mouth, in some accounts, as well as SMS messaging over cellphones (and just 30 percent of Iranians owned a cell phone) played a larger role than internet services.

Now, with the advent of smartphones in Iran – about half of Iranians, or 48 million people, have smartphones. More than 50 percent of Iranians are online.

People protest near the university of Tehran, Iran, Dec. 30, 2017 in this picture obtained from social media.

2. An explosion in messaging options

In 2009, Facebook and Twitter were relatively new with Iranians accessing the services mostly on their desktop computers.

As the 2009 protests unfolded, the Obama administration asked Twitter to delay an update that would have taken the service offline to allow Iranians to continue to use it.

Now, Iranian citizens have a number of ways of receiving and sending messages – straight from the device they carry in their pockets.

Of these newer services, the most popular in Iran is Telegram, an instant messaging service that offers encrypted secret chats and channels, where people discuss news and current events. By one count, more than 100,000 Iranian channels are on Telegram. Facebook’s Instagram is the second most popular service.

As the protests continued, the Iranian government shut down Telegram and Instagram. But other messaging apps give users options.

“Regime in Iran can shut down signal, telegram, etc., but differently from 2009, the whole country is connected and they have a long list of other messaging apps to use,” tweeted Jared Cohen, founder and chief executive of Jigsaw, an Alphabet company, and a senior fellow on the Council of Foreign Relations. “This time around, it’s much harder to win a game of technology wack-a-mole.”

Regime in Iran can shut down signal, telegram, etc, but differently from 2009, the whole country is connected and they have a long list of other messaging apps to use. This time around it’s much harder to win a game of technology wack-a-mole #IranianProtests

And indeed, the head of Telegram took to Twitter on Tuesday to suggest users go to Whatsapp, which “remains fully accessible in Iran.” 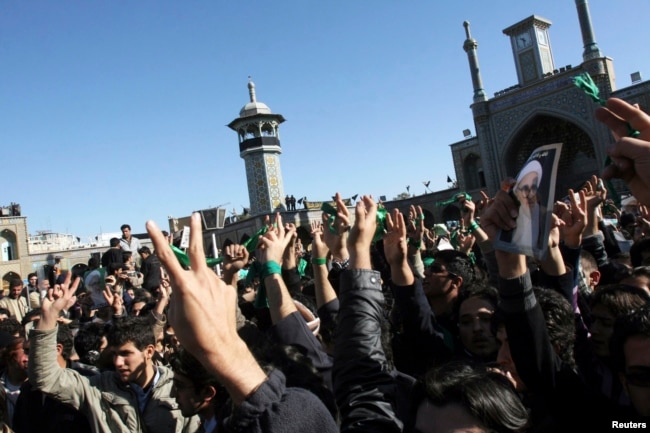 FILE – Supporters of the Iranian opposition movement wear green during the funeral of Grand Ayatollah Hossein Ali Montazeri in the holy city of Qom Dec. 21, 2009.

Since the 2009 Green Movement, more Iranians have access to anti-censorship technology, such as VPNs and proxies, servers that transmit content that can evade government controls.

“Iranian internet users are making use of a wider variety of circumvention tools that allow for selective access to blocked resources,” said Alp Toker, founder of NetBlocks.org, a digital rights group.

“This could be down to a more mature understanding of internet filtering that has developed since the Green Movement protests after 2009, supported by domestic technical expertise and earlier initiatives to develop tools for Iran,” Toker said. “This suggests that workarounds for Iran’s internet filters have become a way of life for many mobile and desktop internet users.”

With more communication technologies available to Iranians, they are more regulated and less open than they were in 2009, says Toker. Mobile devices are more restricted than computers, making it more difficult to circumvent Iran’s internet filters, he added.

In addition, many Iranians are using outdated iPhone devices and skipping software security updates, which means they may be more vulnerable to state-sponsored hacking and surveillance, Toker said.

Since 2009, the Iranian government has worked to create its own internet service and restricted content it considers objectionable on commercial services.

“Iran’s own strict regime of internet filters, but also U.S. sanctions limiting the transfer and sale of technology and security products, are likely contributing factors that mean the choke points are still an effective mechanism for mass control,” Toker said.