VOA — A Turkish-Iranian gold trader testified at a New York trial Wednesday that he paid over $50 million in bribes to Turkey’s economy minister in 2012 to overcome a banker’s fears he was too well-known in Turkey to launder Iranian money in violation of U.S. sanctions.

Reza Zarrab calmly described his arrangement with one of Turkey’s most important public officials as he began what will be several days on the witness stand at the trial of Turkish banker Mehmet Hakan Atilla, who is charged in a conspiracy that involved bribes and kickbacks to high-level officials.

In a conversation about shady transactions involving suitcases stuffed with gold, the economy minister, Zafer Caglayan, “asked about the profit margin,” Zarrab testified. “And he said, ‘I can broker this.’ ”

Zarrab’s decision to plead guilty and cooperate with U.S. investigators — revealed Tuesday on the trial’s first day — was a surprise twist in the trial. The prosecution seemed in jeopardy just months earlier after Zarrab tried to free himself by hiring prominent and politically connected American attorneys to try to arrange a prisoner transfer between Turkey and the United States. The effort by former New York Mayor Rudy Giuliani and former U.S. Attorney General Michael Mukasey failed.

The government’s star witness appeared before jurors Wednesday in federal court in Manhattan wearing tan prisoner scrubs, even though he testified he was released from jail two weeks ago and into FBI custody. At the end of the day with the jury gone, the judge asked Zarrab why he was wearing the outfit, telling prosecutors he would sign an order allowing him to wear civilian clothes if he wanted.

Once Zarrab, 34, was on the stand, prosecutors wasted no time in getting him to name names and muddy reputations in the banking industry and in government.

Assistant U.S. Attorney Sidhardha Kamaraju elicited details of what the United States has said was a well-orchestrated conspiracy to evade U.S. sanctions against Iran and enable $1 billion in Iranian oil proceeds to move through international banking markets. 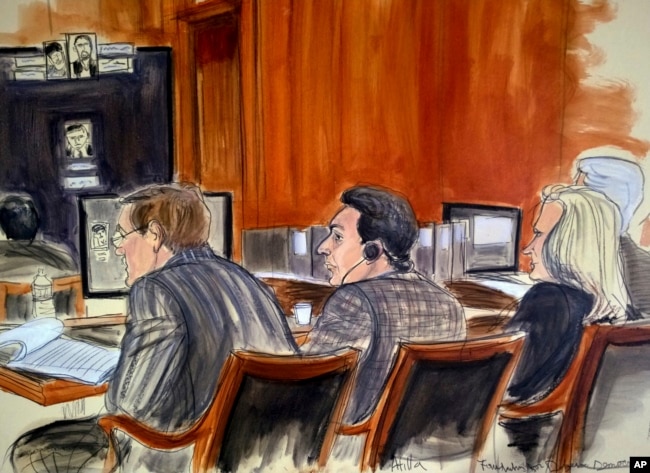 Zarrab said he ran into resistance from a Halkbank executive when he approached the Turkish government-owned bank in late 2011 or early 2012 to try to gain access to Iranian money through trades in gold. The executive, he said, feared that Zarrab’s marriage to Turkish pop star and TV personality Ebru Gundes made him “too popular” to make the trades.

“I was a person who was in the public eye all of the time,” he said.

Undeterred, Zarrab said he met with Caglayan, who was economy minister when President Recep Tayyip Erdogan was prime minister. Caglayan told him he would smooth the way for gold trades, but only if he got half the profits, which he said ended up totaling more than $50 million.

At one point, Zarrab drew diagrams for the jury to illustrate the elaborate web of transactions used to beat the economic sanctions and make him a fortune as the middleman.

The tactics included using Iranian proceeds from gas and oil sales to Turkey to buy gold, having couriers carry the gold in suitcases to Dubai, converting it back into cash that was deposited in a front company account, and laundering the money with multiple bank transfers, including some through the United States.

Zarrab testified that the sanction-evasion scheme was done in consultation with Atilla, a 47-year-old former deputy CEO of Halkbank who has pleaded not guilty. A lawyer for Atilla attacked Zarrab’s credibility Tuesday during opening statements, saying the trial is about Zarrab’s crimes.

Caglayan is indicted in the U.S. case. The indictment describes his alleged role in the gold-transfer scheme and in another scheme in which he and other Turkish government officials supposedly approved of and directed the movement of Iranian oil proceeds by claiming they were connected to the sale of food and medicine to Iran from Dubai.

Erdogan has called on American authorities to “review” the decision to indict Caglayan, saying the former minister had not engaged in any wrongdoing because Turkey had not imposed sanctions on Iran, an important trade partner.

The prosecution of Zarrab has been major news in Turkey, where Erdogan has repeatedly asked the U.S. to release him and more recently portrayed the U.S. case as a sham.