Forbes – They say a news event has a three-day lifespan. The regime in Tehran is counting on such a theory to have the international community move on after the recent earthquake that shook western Iran. Each passing day further reveals the scope of this vast catastrophe.

“More than 1,000 people have lost their lives,” Iranian MP Ahmad Safari said to the official ILNA news agency 72 hours after the quake. “I went to a village where they said they pulled 20 corpses from under the rubble. They were not even counted in the death toll. 70 people died just in one alley of the town of Sarpol-e Zahab. Another 250 were killed in the Mehr housing complex.”

Experts advised the government of former Iranian president Mahmoud Ahmadinejad (2005-13) to build 25,000 homes under the Mehr blueprint. Ahmadinejad, however, ordered the construction of 1.5 million such units, raising questions of possible negligence in construction and lack of proper supervision.

While the ruling regime failed to provide any first aid relief, Iranian opposition leader Maryam Rajavi made an early callasking supporters to rush to their compatriots in need.

“Just as opposed to the practices of the clerical regime, now is the time to show solidarity. Assisting and saving the victims of the earthquake is a sacred national duty,” she said.

The incoming statistics of this recent quake are devastating.

“There are still people stranded in villages where 90 percent of the homes are left destroyed. No official has visited these areas. The locals, along with their children, are forced to sleep the nights in their farm fields without any shelter,” a reported wired by the semi-official ISNA news agency reads.

Instead of focusing measures to rush aid for the victims, Iran’s regime imposed martial law in Sarpol-e Zahab, the epicenter of the earthquake. 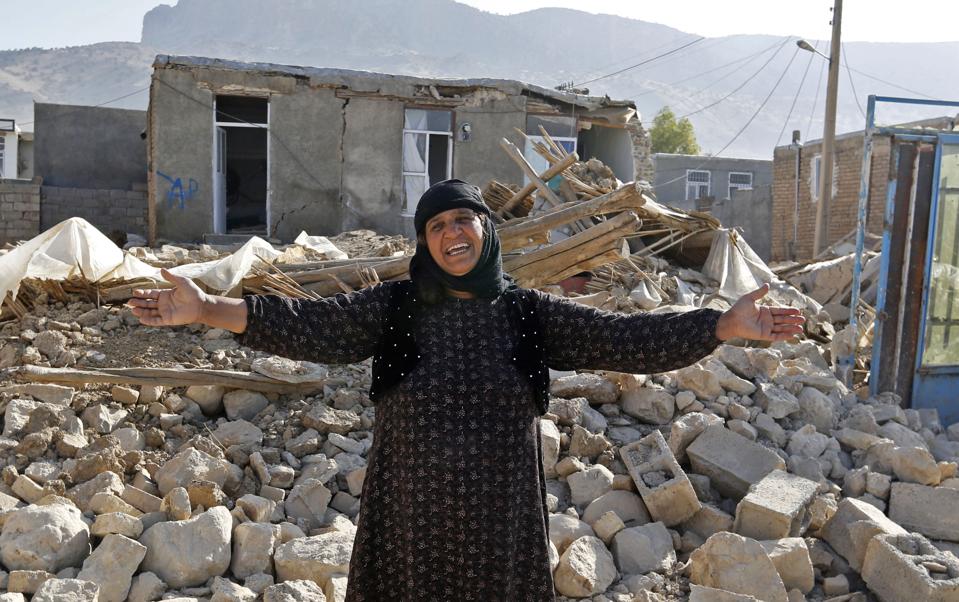 A picture taken on November 15, 2017 shows an Iranian woman gesturing next to the rubble of her home in Kouik village near to Sarpol-e Zahab, two days after a 7.3-magnitude earthquake struck Iran’s western Kermanshah province near the border with Iraq, leaving hundreds killed and thousands homeless. Iranian authorities scramble to help tens of thousands of people left homeless by a major quake on the border with Iraq that killed more than 400 people as anger mounts among residents at what they see as a slow response. / ATTA KENARE/AFP/Getty Images

Was such a catastrophe preventable? Is Iran the only country prone to earthquakes?

Japan has a history of earthquakes and thanks to technological advances we no longer witness skyrocketing number of casualties and damages.

Australia also experienced a powerful 7.0-magnitude earthquake on Tuesday that resulted in tsunami warnings. No casualties or major damages were reported.

Preventing quake damage is nothing out of the ordinary or impossible. A truly popular government allocating the necessary manpower, means and budget can do the job. Here is exactly where the problem lies in Iran.

Iran’s five military entities enjoy a budget of $13.5 billion for the current Persian calendar year (March 2017 to March 2018), of which $7.4 billion belongs to the IRGC. This is a 24 percent increase from the last calendar year. 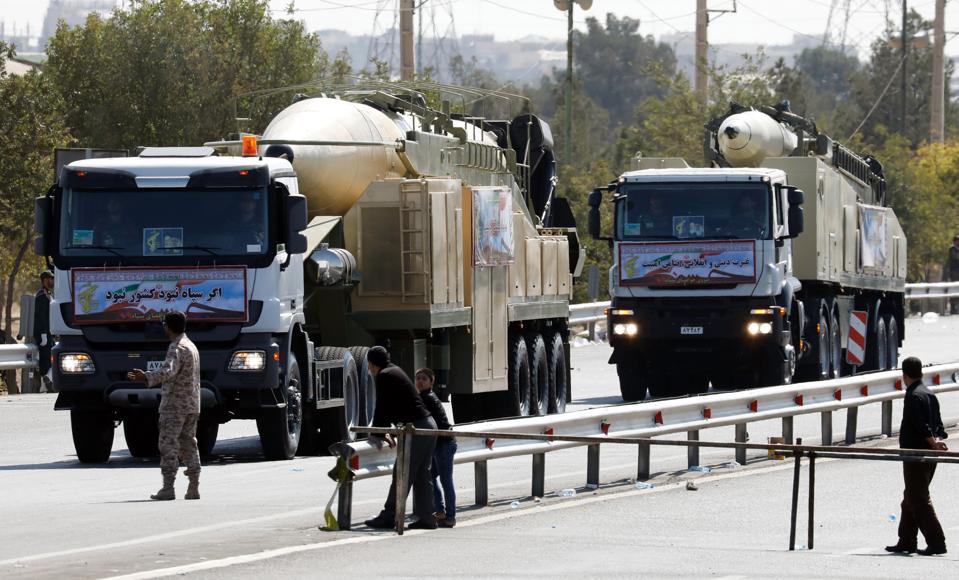 The new Iranian long range missile Khoramshahr (front) is displayed during the annual military parade marking the anniversary of the outbreak of its devastating 1980-1988 war with Saddam Hussein’s Iraq, on September 22,2017 in Tehran. Rouhani vowed that Iran would boost its ballistic missile capabilities despite criticism from the United States and also France. / STR/AFP/Getty Images

It is worth noting that the Iranian regime has a nearly $7 billion budget deficit, equaling to nearly half of its military budget.

Proper now would be to evaluate the money sent by the Iranian regime to Lebanon. There is actually no figure of Tehran’s financial support for the Lebanese Hezbollah.

While recent reports have placed this value at over $800 million, back in 2011 Al Arabiya Farsi shed further light in this regard.

“Hezbollah used to receive $350 million each year from Iran. In addition to Hezbollah’s own activities, this budget was used to provide for members’ salaries, the families of killed Hezbollah members, various projects in southern Lebanon and Beqaa, and bribing Lebanese political figures to back Hezbollah.”

One such $400 million construction project in Lebanon, including parks, was paid for completely by Iran. All the while millions in Iran remain under poor living conditions.

“As long as there is money in Iran, we will have money,” said Hezbollah Secretary General Hassan Nasrallah, making it crystal clear how the terrorist-designated group’s entire budget is bankrolled by Tehran.

Parallel to Lebanon, Iran is known for its belligerence in Syria, Iraq, Yemen and beyond.

Deprived of this budget, 40 percent of the Iranian people are living in complete poverty. 13 million homeless in city outskirt slums. 14 million literally cannot pay for their daily meals.

State-affiliated websites in Iran report nearly 20,000 homes were completely destroyed in the recent quake. Whereas in Japan, simple homes made with a budget of $10,000 each, have proven to be earthquake-resistant.

If we take into consideration just the abovementioned $600 million, Iran’s government could have provided 60,000 such homes for victims of the past three major quakes across the country.

This is all aside from sitting on an ocean of 125 billion barrels of oil, 227 trillion cubic meters of gas and a daily revenue of $200 million from exporting oil.

The point is the solutions are out there. Iran, however, is ruled by a regime that could care less about its populace. For those sitting in Tehran, this is a recipe for disaster.

Mohammad Biranvand, another member of Iran’s parliament said, “Do you know that the people now trust athletes and celebrities more than they trust government institutions? All this indicates that the earthquake of distrust will be far more destructive than the recent earthquake.”

I am a political/rights activist focusing on Iran & the Middle East. I also write in Al Arabiya English, and contributed to The Federalist, The Hill and Raddington Report. I tweet @HeshmatAlavi