Iranian Soldier Beheaded by IS in Syria Mourned as an Icon

VOA — Iran’s supreme leader and thousands of others Wednesday mourned a young Revolutionary Guard soldier beheaded by the so-called Islamic State group, a killing that has struck a nerve within the Islamic Republic as its forces continue to suffer casualties in Iraq and Syria. 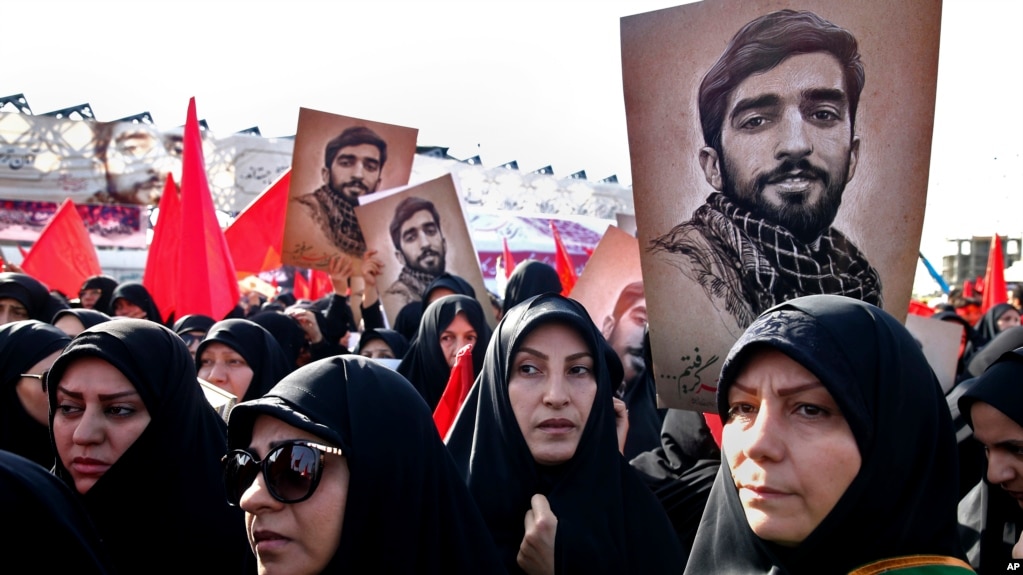 The slaying of 25-year-old Mohsen Hojaji captured the imagination of many in Iran, a Shiite-ruled nation whose national religion considers as acts of mourning and acknowledging sacrifices a sacred act. Since his death, artists and others have memorialized Hojaji in videos and paintings, while discussion of his slaying has muted domestic criticism of Iran’s foreign military operations, especially in Syria.

His funeral in Tehran brought Supreme Leader Ayatollah Ali Khamenei, who prayed near his Iranian-flag-wrapped casket. Mourners later lay flowers atop his coffin, while on the street soldiers with the paramilitary Guard mixed with men wearing black and women in long black chadors. Many carried drawn portraits of Hojaji, while others unfurled the black flags common during Muharram, a Shiite mourning period.

Many current and former government officials, including parliament speaker Ali Larijani and former President Mahmoud Ahmadinejad, attended the funeral. Politics entered the mourning as well, as a cleric on hand alleged Israel and the U.S. were behind the Islamic State group, drawing cries of “Death to Israel” and “down with the U.S.” from the audience.

“We swear on blood of Hojaji we will not rest until destroying Israel,” cleric Ali Reza Pahanhian said from the podium. “Israel, we swear on the head of Hojaji that we will behead your leaders. Guards! Prepare your missiles for annihilation of Israel.”

Hojaji is one of many Guard members and volunteers to be killed in Iraq while advising Shiite militias battling the Islamic State group or in Syria, where Iranian forces backed embattled President Bashar Assad. More than 2,000 have been killed, roughly half of them foreign troops including Afghans and others.

But while the Islamic State group tried to use Hojaji’s capture and subsequent beheading as propaganda, many in Iran saw it differently. An image of Hojaji from an Islamic State video, showing him stoically standing after his capture with smoke rising behind him in the Syrian desert, inspired a sense of patriotism in an Iran in which some have grown tired of its military operations abroad.

“Look at the photo, there is no sign of weakness despite him being shot and captured,” his 23-year-old widow Zahra Abbasi earlier told Iranian media. “There is no fear in the eyes. It is all bravery, courage. He is like a mountain.”

Graphic artist Hassan Rouholamini took the frame and reimagined it with Hojaji being welcomed by the third Shiite saint, Hussein, the grandson of the Prophet Muhammad. Hussein himself was beheaded at the Battle of Karbala in present-day Iraq in the 7th century, an event Iranians will mark with this week’s coming Ashoura commemoration.

Khamenei himself even referred to Hojaji as a “dear martyr” in a speech.

“God emboldened Hojaji as an evidence of numerous young people” willing to fight and be killed defending Islam, the supreme leader said.

Iranian President Hassan Rouhani, a relative moderate cleric who himself criticized the Guard in his re-election campaign, also praised Hojaji for showing how Iranian people are ready to sacrifice themselves for the greater good.

Hojaji’s death has caused a rare unity across hard-liners, moderates and reformists within Iran. Many activists, artists, athletes, celebrities and politicians, including Foreign Minister Mohammad Javad Zarif, have offered condolences and expressed sympathy.

His death also has silence some criticism of Iran’s foreign military operations, especially in Syria. In May, Tehran’s former reformist mayor, Gholamhossein Karbashchi, said in a public speech that diplomacy rather than military presence can solve the problems in Syria.

Hojaji’s body was first taken to Iran’s holy city of Mashhad for a blessing in the shrine of Imam Reza, the eight Shiite Imam. He will be interred Thursday his hometown of Najafabad, some 400 kilometers (250 miles) south of Tehran.