VOA  — President Donald Trump on Thursday threatened to take unspecified action against Iran next month, expressing continued dissatisfaction with the 2015 nuclear agreement signed by Iran and a group of world powers, including the United States.

“We are not going to stand for what they’re doing to this country,” Trump told reporters aboard Air Force One. “They have violated so many different elements, but they’ve also violated the spirit of that deal. And you will see what we’ll be doing in October. It will be very evident.”

He reiterated that “it’s a deal that should have never, ever been made.”

The United States on Thursday extended some sanctions relief for Iran under the 2015 nuclear deal. But no decision has been made on whether to preserve the deal itself. 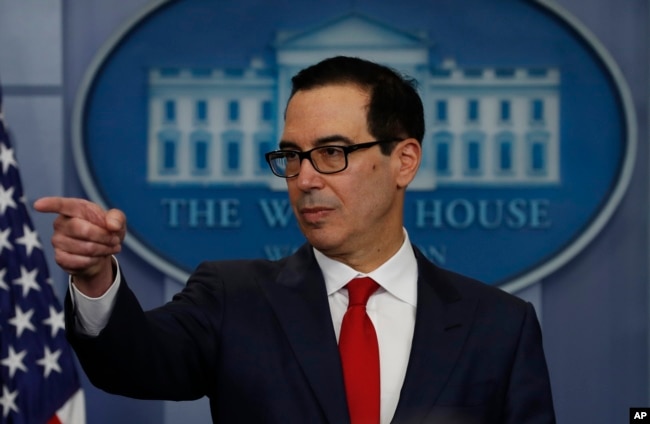 FILE – Treasury Secretary Steven Mnuchin takes a question during the news briefing at the White House, in Washington, Aug. 25, 2017.

“Treasury will continue to take strong actions to counter Iran’s provocations, including support for the IRGC-Quds Forces and terrorist extremists, the ongoing campaign of violence in Syria, and cyberattacks meant to destabilize the U.S. financial system,” U.S. Treasury Secretary Steven Mnuchin said in a statement posted on the agency’s website.

IRGC stands for the Islamic Revolutionary Guard Corps, the branch of the Iranian military meant to protect the country’s Islamic republic system. The IRGC’s Quds Force is its extraterritorial unit.

In London on Thursday, U.S. Secretary of State Rex Tillerson said Iran was “clearly in default” of expectations under the 2015 nuclear deal.

While international inspectors have found Iran is meeting requirements to limit its nuclear program, Tillerson said that it was violating language about regional peace and security, citing its ballistic missile program and its support for Syria’s President Bashar al-Assad.

Economic sanctions against Iran were dropped in exchange for Tehran’s limiting of its nuclear program. 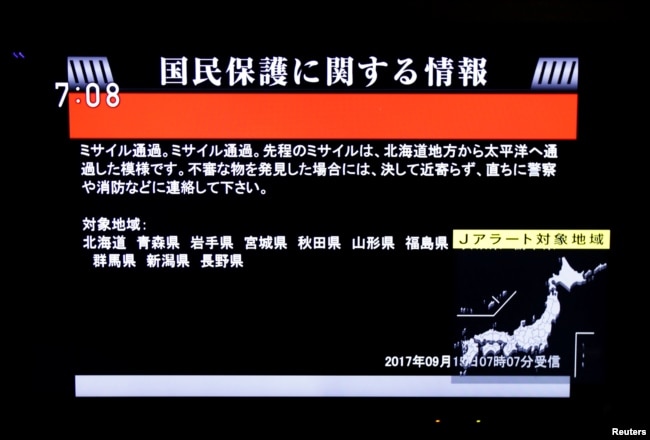 The Japanese government’s alert message, called a J-alert, notifying citizens of a ballistic missile launch by North Korea is seen on a television screen in Tokyo, Sept. 15, 2017.

Amid indications Pyongyang may soon carry out further provocations beyond its recent ICBM launches and sixth nuclear test, Trump said a new response beyond the latest U.N. and U.S. sanctions and warnings was being formulated.

“I can’t tell you, obviously, what I’m working on. But believe me, the people of this country will be very, very safe,” Trump told reporters. “I think that a lot of effort is being put into this. We’re looking at what’s going on. As we speak, we are literally at it right now.”

Hours after Trump spoke, North Korea fired a missile from Pyongyang that flew over Japan and about 2,200 kilometers out into the Pacific Ocean.

The commander of the U.S. Strategic Command on Thursday was the latest authoritative voice to indicate the North Koreans on September 3 most likely set off a thermonuclear device in a tunnel at their Punggye-ri nuclear test site.

“I have to make the assumption that what I saw equates to a hydrogen bomb,” Air Force General John Hyten said.