DW- It seems to be an unwritten rule that Iranian politicians are entitled to help their children find high-paying jobs. One politician’s son recently put his success down to “good genes” – sparking backlash on social media. Social media consumers in Iran are young, well educated, and above all, sarcastic. They particularly enjoy using Twitter to draw attention to their country’s problems. The who’s who of Iran’s political elite are active on on the social media platform, from Supreme Leader Ayatollah Ali Khamenei and President Hassan Rouhani to lower-ranking members of the government and parliament.

Now the country’s online activists are hitting back at the establishment through the hashtag #ژن_خوب (#good_genes). For weeks, users have been using the hashtag to post photos of the children of politicians – children who have had surprisingly quick success in their political or business careers.

The protest began after an interview was published several weeks ago with Hamid Reza Aref, a successful businessman. He is the son of Mohammad Reza Aref, a reform-oriented parliamentary group leader. Hamid Reza Aref, now 36, started his career at age 23 when, as a business partner with the South African mobile phone service provider MTN, he won an auction with the Ministry for Communication and Technology. Today, MTN holds 49 percent of MTN Irancell, the second-largest telecommunications company in Iran. At the time, Hamid Reza Aref’s father served as vice president under Mohammad Khatami. When asked how he was able to rise so quickly in the industry, the young Aref said: “I’m talented. For that, you have to have good genes, and I inherited them from my parents.” The response provoked backlash in the media and on social networks, as evidenced by Twitter user farzad_az, who a photo of Hamid Reza Aref and his parents with the “good genes” hashtag. 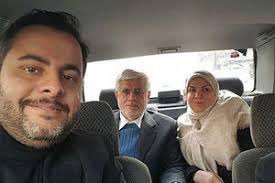 Conservative media outlets have been especially critical of both the son and his father. Mohammad Reza Aref belongs to a group of influential politicians who have been vocal about fighting corruptionunder President Rouhani’s administration. The Tasnim News Agency, which is affiliated with the Revolutionary Guard, says the interview is proof that reform-oriented politicians are cheating their young supporters, saying that instead of fighting corruption, they’re engaging in nepotism.

But the Revolutionary Guard, a central column of Iran’s conservative establishment, doesn’t have much of a leg to stand on. In addition to their military significance, they exert enormous influence on the Iranian economy, and are active in almost every sector. They operate companies in the energy and arms industries, for example, where corruption, money laundering, and a lack of transparency are business as usual. Last year, anti-corruption watchdog Transparency International put Iran in 131st place out of 176 countries. Iran is a young nation. The average age of its population is 30. Official statistics put the unemployment rate at 12 percent, while among people under 25, every fourth person is jobless. The country is also experiencing a brain drain among well-educated young people. It’s common knowledge that without connections, it’s almost impossible to get a decent job. And it’s also no secret that the country’s political class is not overly invested in fighting corruption.

The interview with Aref and his “good genes” comment was the last straw for many young people. The Twitter protest hasn’t been without effect. Kamil Lahouti, the son of the reform-oriented MP Mehrdara Lahouti, was supposed to take up a position as mayor of the small town of Chamkhaleh next week. Now, he’s withdrawn his candidacy. But his father remains combative, telling a newspaper that he had always been against his son taking the job. “He deserves something better!” Mehrdara Lahouti said.