Netanyahu to Putin: Iran’s Role in Syria is a ‘Threat’

VOA – Iran’s growing role in the Syria conflict is a “threat” to Israel, the Middle East and the world, according to Israeli Prime Minister Benjamin Netanyahu.

“Iran is putting in great efforts to fortify its presence in Syria,” he added in remarks translated into Russian and posted Wednesday on the Kremlin’s website. 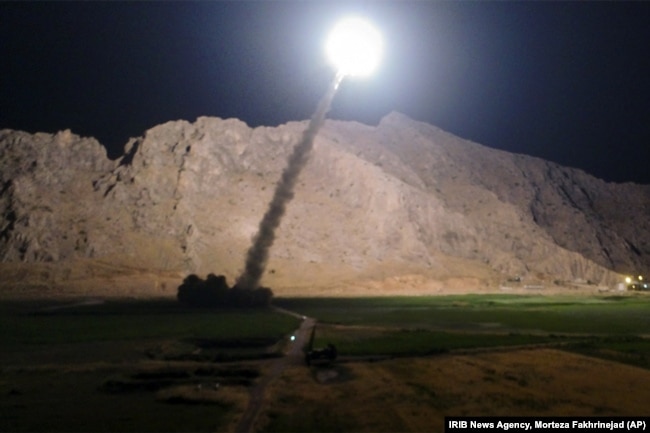 FILE – A missile is fired from city of Kermanshah, in western Iran, targeting the Islamic State group in Syria, June 19, 2017.

“We cannot forget for a minute that Iran continues to threaten to destroy Israel on a daily basis,” Netanyahu said, accusing Tehran of “arming terrorist organizations” as he met with Russian President Vladimir Putin in Russia’s Black Sea resort of Sochi.

Like Russia, Iran has been a major military backer of the Syrian regime, first in its war with rebel groups across the country and later against Islamic State.

The two have worked in partnership with Lebanon’s Hezbollah group, Israel’s arch-foe.

In the past few months, Russia has been the main mediator of de-escalation zones in Syria, which Israel worries would allow Iranian troops and Hezbollah forces to deploy in greater strength.

Russia intervened in the Syrian conflict on behalf of president Bashar al-Assad in 2015.