By The Iran Project

The international agreement with Iran continues to prevent Iran from acquiring a nuclear weapon. No American national security objective would be served by withdrawing from it as long as Iran is meeting the agreement’s requirements. To the contrary, given continuing assurance by the International Atomic Energy Agency (IAEA) that Iran is in compliance with the agreement, the Joint Comprehensive Plan of Action (JCPOA), such a unilateral act would have grave long term political and security consequences for the United States.

We recommend instead a comprehensive policy toward Iran that furthers U.S. national security interests. This approach would push back against Iran’s threatening actions against its neighbors; enable the achievement of other U.S. objectives in the region; and continue to prevent an Iranian nuclear weapon-all without the risk of war and the consequent loss of American lives, resources and stature of the United States as a world leader.Specifically, we recommend that the United States:

Continue to certify Iran’s compliance with the JCPOA as long as the IAEA, the United States and other nations determine that Iran is meeting its commitments. The United States will thereby buttress the international coalition that brought Iran to the table and avoid a highly damaging challenge to the U.S. dollar-lead international financial order that could come from wide international opposition to what is judged to be an unjustified re-imposition of U.S. sanctions. In addition, preserving U.S. fidelity to the JCPOA will be essential for successful future joint action should Iran ever be found in violation. Iran with a nuclear weapon would be a far greater threat to the region and U.S. security.

Engage fully in the work of the Joint Commission of JCPOA, the body specifically set up to oversee compliance by all parties to the agreement. American leadership in that governing body would: strengthen IAEA oversight; maintain active U.S. involvement in questioning all credible evidence of Iranian violations; and preserve the U.S. option to take unilateral action against Iran should it violate the agreement and others do not respond. International compliance investigations, intelligence-gathering and inspections are important parts of this effort. But, they must be done in good faith and in a credible fashion, letting the results speak for themselves. While the United States should encourage the IAEA to inspect sensitive sites in Iran when there is evidence of possible violations, in the absence of such evidence, the United States would not have the support of a majority of Joint Commission members needed to require Iran to accept IAEA access.

Begin discussions with other JCPOA Joint Commission members on options for a follow-on agreement that would, after the expiration of JCPOA, add further guarantees to assure that Iran will not have the capacity to build a nuclear weapon far into the future. The United States should quietly begin conversations with its negotiating partners (Britain, China, France, Germany and Russia) not to seek to renegotiate the JCPOA-which all would oppose-but to explore the potential for a mutually agreeable arrangement for the future. Consideration should also be given to approaches that would build on the JCPOA to promote nuclear restraints on a regional basis.

Propose a new consultative body comprising Saudi Arabia, Iran, Russia, Turkey, the United States, China and the European Union that would begin regular exchanges on the major disputes in the area. This would not be easy and the first meeting including Saudi Arabia and Iran could take many months to organize. Since none of the conflicts in the Middle East can be resolved by military force alone and all will require some agreement between the Gulf States and Iran, the exploration of these broader political options is essential. Such a body could encourage these governments to discuss differences from the standpoint of nation states, not from an ideological or sectarian point of view.

Establish a regular channel of communication at a senior level with Iran that would enable the United States to express its concerns directly to Iran’s leaders about Iranian actions, provide a channel to resolve conflicts before they escalate, and explore opportunities for working in parallel with Iran on problems that impact U.S. security interests such as in Afghanistan, Iraq, Syria and Yemen.

Begin regular consultations with U.S. allies and partners in the region to share information and coordinate strategies to push back against Iran’s threatening actions that contribute to the instability in the Middle East, including proxy and asymmetrical activities, particularly if direct engagement with Iran on these issues proves fruitless. Retaining the JCPOA will be integral to the success of this effort.

The consequences for U.S. national security of unilaterally refusing to certify Iran’s compliance with the JCPOA in the absence of evidence of noncompliance would be:

The United States would presumably re-establish unilateral sanctions against companies and nations that have begun economic and trade relations with Iran since the nuclear agreement was reached two years ago. This action might include extra-territorial sanctions against non-U.S. governments, banks and private companies. While the administration might delay renewing sanctions for a period of time, the intention of doing so would be clear.

The renewal of U.S. sanctions would most certainly result in Iran alleging the United States has violated the JCPOA and require a meeting of the Joint Commission (UK, France, Germany, Russia and China, plus Iran) to resolve the question of U.S. compliance. The renewal of U.S. sanctions would challenge European states and other nations to consider whether to acquiesce in U.S. Treasury demands or suffer potentially punishing fines for trading with and investing in Iran. A U.S. decision to renew sanctions in the absence of evidence of Iranian noncompliance would damage American leadership, raise the likelihood of legal disputes with European companies, banks and governments, and potentially directly challenge the power of the U.S. Treasury and the U.S. dollar as global reserve currency. Backing away from the JCPOA would also damage U.S. credibility as a partner in future diplomatic negotiations including with North Korea.

Europe, China and Russia could decide to continue observing the JCPOA should Iran continue to comply with its commitments restricting its nuclear program. Iran’s agreement would no doubt be based on assurances from Europe and others of continued sanctions relief, which would permit the expansion of trade and investment opportunities in Iran. Should this happen, it is the United States, rather than Iran, that would be isolated and damaged economically.

A clear break between the United States and Europe (EU) over the sanctions issues would allow Russia and China to move closer to achieving their longstanding goal of dividing the West. The collapse of the coalition that brought Iran to the negotiating table would destroy international unity in determining how to respond forcefully should Iran decide in the future to expand its nuclear program with an intention to build a nuclear weapon.

Alternatively Iran could respond to the U.S. rejection of the JCPOA by returning to its pre-agreement enrichment program at full strength and under far weaker international monitoring.

A restart of an unconstrained nuclear program could be the default Iranian reaction given the likelihood that at least some European and Asian companies will decline to do business in Iran if the U.S. re-imposes extra-territorial sanctions. Iran with a nuclear weapon would be a far greater threat to the region and U.S. security than it is today.

Security forces and other hard line elements in Iran would almost surely acquire more political power in the wake of a U.S. effort to scuttle the JCPOA.

A more dominant Revolutionary Guard (IRGC) role could result in heightened Iranian proxy and asymmetrical actions against the United States and its interests worldwide and further strengthen Iran’s strategic partnership with Russia, a relationship that so far has been based on expediency rather than on long historic ties or political affinity. More importantly a more powerful IRGC would weaken those within Iran who seek to reduce IRGC influence and to pursue the economic and social reforms proposed by recently re-elected President Rouhani.

Military conflict with Iran and its over 80 million people would become more likely, as U.S.-Iranian hostility mounts and as Saudi Arabia becomes emboldened by U.S. military support and the rise in American threats against Iran. An American effort to promote regime change through covert action, based on the false assumption that political forces exist inside Iran that are ready to overthrow the current government, would most certainly fail and lead directly toward conflict.

A war with Iran is more imaginable today than at any time since 2012. 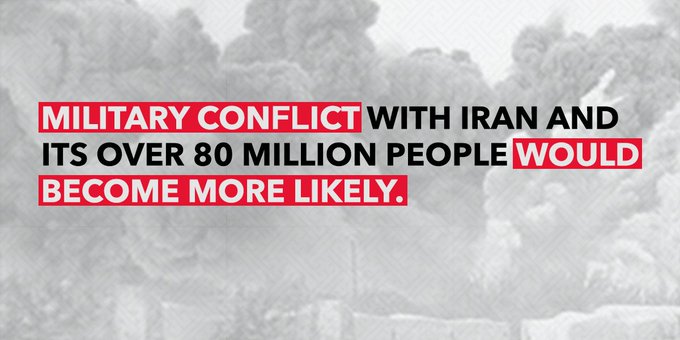 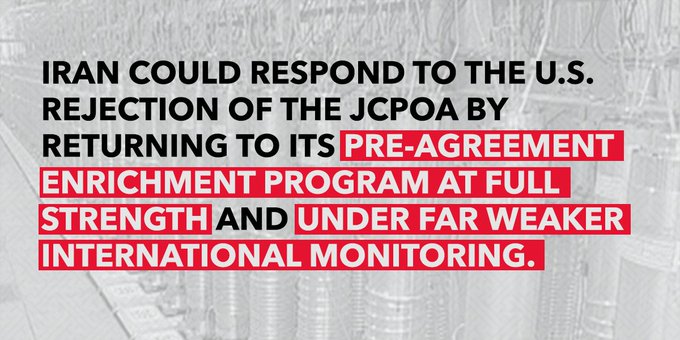 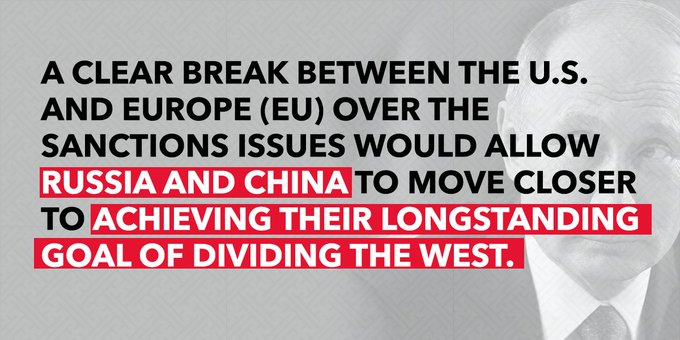 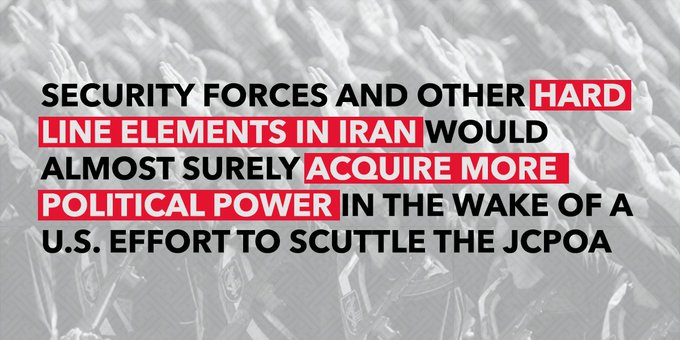